Across several articles we have covered why TDP numbers on the box are useless for most users: the loose definition of Intel’s TDP is that it represents the cooling required for the processor to run at the base frequency. ‘Cooling Required’ is a term referring to the power dissipation of a cooler, which isn’t strictly speaking the same as the CPU power consumption (because of losses), but close enough for our definitions here.

For the Core i9-9990XE, that means that when all 14 cores are running in a normal configuration at 4.0 GHz, with no turbo initiated, the CPU is guaranteed to be running at 255W or less. However, in our case, ICC has pushed the processor up to its turbo speed, 5.0 GHz, for an effective ‘infinite’ time. This means we never see 4.0 GHz, and only ever see 5.0 GHz.

In our testing, ICC did at least have some form of ‘Turbo’ enabled, which meant that the chip could run in idle states. At idle, the system would run at 1.2 GHz, but still at the same 1.29 volts that the chip was set to. This lead to a full-system idle power of 266W and a load temperature on the chip of 24C in a 20C ambient room. Unfortunately we could not measure the chip power directly due to some quirks of how Intel manages the power readouts in software. We were able to detect the mesh frequency at idle, which was 900 MHz.

When running a fully multithreaded test, such as Cinebench R20, the fact that every core hit 5.0 GHz was easy to detect. With the advent of features such as Speed Shift, Intel aims to get the CPU from idle to 5.0 GHz as quickly as possible. During a sustained CB20 run, which is possible through the command line, we were able to observe a peak power consumption of the system at 600W, which indicates that at 5.0 GHz this CPU is pulling an extra 334 W over idle – this power naturally being split mostly to the cores but some will be for the mesh and some will be in the efficiency of the power delivery. At full speed, the mesh will rise up to 2.4 GHz.

Naturally, fitting this into a 1U system requires the substantial cooling we described at the beginning – as this cooling is running at full speed even when idle, it doesn’t affect the power consumption when we ramp up the workload. But tying into the temperature, the internal sensors indicated a 81C peak temperature, while still at 1.290 volts. For a 14-core 5.0 GHz CPU, that’s pretty amazing. 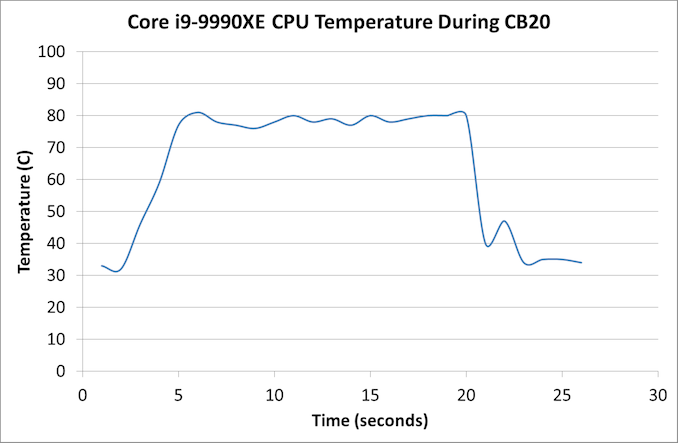 For the audible testing, this thing is loud. With ICC’s proprietary liquid cooling solution, in such a small 1.75-inch form factor, in order to take care of those 350-400W that the CPU could draw, nothing short of some fast flow and high powered fans would suffice. This system runs the cooling at full speed both in idle and at full load, which in this instance measured a massive 78 decibels at only 1 ft (30cm) from a closed system. The fact that this is in a 1U form factor should give you an indication that it should be in a rack in a datacenter somewhere, and not in the office. I am not so lucky, and I was only able to perform testing on the system when everyone in my family and next door was out during the day.

We did some testing with AVX-512 tests. The CPU in this instance only hits 3.8 GHz when at full speed, indicating a -12 offset. It would appear that Intel, while pushing the single core frequency through binning, didn’t so much take into account AVX-512, or at least hoped that it would also be as efficient. In this mode we saw the same power consumption at a system level of around 600W, however the CPU thermals did rise slightly to 82C.

Due to the limitations of the motherboard in the system, which was locked down by the system provider, we were not able to attempt additional overclocking. That being said, I’m sure that the OEM partners and system integrators would prefer it if end users did not perform additional overclocking, lest this MSRP-less ‘no guarantee of any more chips’ processor actually bites the dust.