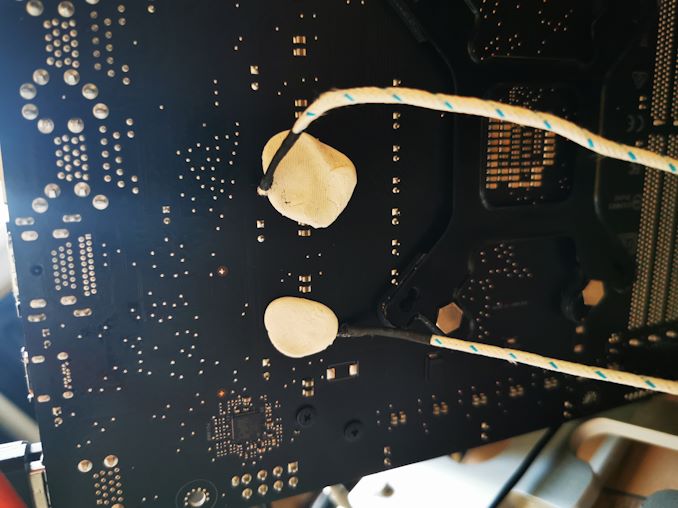 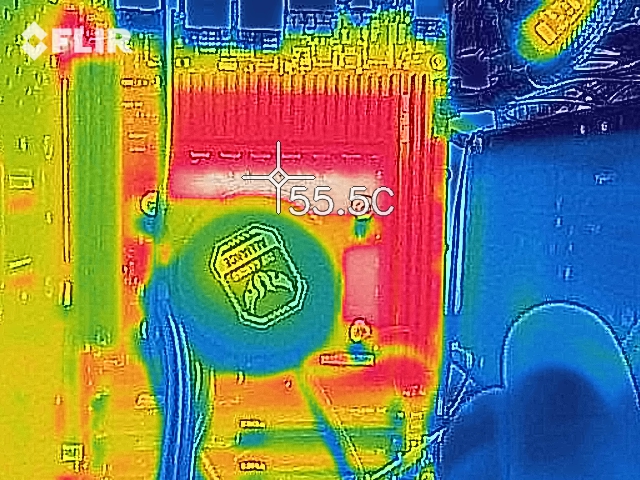 We measured 55.5°C on PCB between the CPU socket and power delivery

The ASUS Pro WS X570-Ace is running a 12-phase power delivery for the CPU VCore and a 2-phase setup for the SoC. This is controlled by an ASP1405I which is a rebadged International Rectifier IR35201 PWM controller which is operating in a 6+1 configuration. Cooling the power delivery is a good-sized aluminium heatsink with uniformed fins which when combined with good passive airflow, should prove effective. As ASUS is running the Pro WS X570-Ace power delivery power stages in a teamed mode as opposed to doublers, this should, in theory, make the power delivery cooler. Delivering power to the CPU is a single 8-pin 12 V ATX which is more than enough power for the current Ryzen 3000 processor line-up.

Note - The ASRock B450 Gaming ITX-ac model crashed instantly every time the small FFT torture test within Prime95 was initiated. At anything on the CPU VCore above 1.35 V would result in instant instability. The Ryzen Master auto-overclocking function failed every time it tried to dial in settings, but it does, however, operate absolutely fine at stock, and with Precision Boost Overdrive enabled.  Either the firmware is the issue, or the board just isn't capable of overclocking the Ryzen 3700X with extreme workloads with what is considered a stable overclock on the X570 chipset. We will re-test this in the future.

Comparing the ASUS Pro WS X570-Ace to other models on test with our Ryzen 7 3700X processor, we found that at the time of writing, this particular model has the most efficient power delivery design so far. The teaming of the power stages from a 12+2 to a 6+1 design works well and as a result, runs around 7°C cooler than the MSI MEG X570 Godlike at maximum load. One drawback to the ASUS Pro WS X570-Ace is that this model doesn't include a VRM temperature sensor integrated into the power delivery, but our thermal probe readings and thermal imaging are consistent, and the WS X570-Ace performs superbly in comparison to both the MSI MEG X570 models we have tested so far.