Ice Lake falls under Intel’s ‘10th Gen Core’ family, and is based around the latest iteration of the ‘Core’ microarchitecture, which initially debuted over a decade ago and has received plenty of key critical enhancements and extra features along the way. Over the years we’ve seen improved prefetchers, smarter branch predictors, adjusted cache sizes and capabilities, deeper and wider execution, micro-op caches, accelerated calculation logic, and lower power operation, all designed to increase the instruction throughput, decrease cache misses, and improve power efficiency.

When Intel designs a new generation of Core, it tends to go in a lot of things: mobile CPUs, desktops, servers, sometimes embedded, new communications technologies, and plenty of other custom silicon besides. As a result, it has to scale, from low-end to high-end. One of Intel’s new Chief Architects, Jim Keller, says that Intel has a ‘milliwatt-to-megawatt’ strategy when it comes to product design, and it’s the Core microarchitecture that is currently bringing in the big $$$ to fund a lot of the R&D.

Before we go into the new Sunny Cove core, I should preface the explanations with a little warning. Intel’s previous microarchitecture update and design, Skylake, is Intel’s most profitable design ever. Part of that reason is that it has been around the block for four generations of products.  Intel hasn’t changed the core in that time, for almost four years. At this point, we’ve been yearning for something that actually has changes. So please forgive a little excitement when covering a few of the more mundane updates.

Despite the instruction entry point into the core being at the front-end. Intel didn’t say too much about Sunny Cove in this respect. Typically Intel keeps the details of its prefetchers and branch predictors secret, although CPU Architect Ronak Singhal did state that it is by-and-large similar to the Skylake design. Ronak has said that the branch predictor has increased accuracy, and that the average/effective load latency has decreased, and by and large the front-end of the CPU has been optimized for client (read consumers/end-users), rather than servers, which Skylake was. The internal structures of the branch predictor unit and prefetcher are larger according to Intel, which should help improve accuracy.

The L1 instruction cache is still a 32 KiB 8-way design, and there are still five decoders in play. These decoders are split as one complex decoder and four simple decoders, and they can supply up to five micro-ops per cycle. There’s nothing drastically new in terms of op fusion we are told, just the general expected improvements, plus additional support for the new AVX-512 instructions.

The micro-op cache gets an update here, from 1.5k entries to 2.25k entries. This is the first time that Intel has increased the micro-op cache size since Haswell, but it should be noted that the competition also has micro-op caches (ARM has 1.5k, AMD has 2k for Zen, 4k for Zen 2), and so refinement in this area is going to be critical. The micro-op cache can supply six micro-ops to the queue per cycle.

Overall, six micro-ops can be fed between the decoders/cache/direct micro-code per cycle. That is split between up to six per cycle from the cache, up to 5 from the decoders, and up to 4 from direct microcode (which gets fed through the complex decoder.

The micro-op queue, for rename/allocate/retire, has also increased. The design went from 182 micro-ops in Haswell to 224 in Skylake, but goes all the way up to 352 in Sunny Cove, a massive 57% increase. This will help managing which instructions are ready to be processed by the scheduler, although this often comes at the penalty of power. This is one of the advantages of using a smaller process node – there’s more power budget to go around, allowing a CPU team to design bigger queues.

With the increased queue size, Intel also reports that support for in-flight loads and stores has increased: up from 72 loads in Skylake to 128 in Sunny Cove, and up from 56 stores in Skylake to 72 in Sunny Cove. This means that the in-flight load/store ratio is more weighted in favor of loads, which Intel states is part of the more user-focused design where loads end up being more important than stores.

This is where the fun happens. As with previous Intel designs over the years, we still have a unified scheduler for both integer and vector operations, however they are split between four different reservation stations depending on what operation is needed:

In total, the number of execution ports has increased from 8 in Skylake to 10 in Sunny Cove. This allows for 10 micro-ops per cycle to be dispatched from the reorder buffer, a 25% increase. The two new ports lie in different areas: Skylake had 3 AGUs, supporting two loads and one store per cycle, but Sunny Cove now has 4 AGUs, for two loads and two stores per cycle. The other new port is a store data port. With these changes, the L1 data cache can now support two stores per cycle, effectively doubling the L1 store bandwidth. 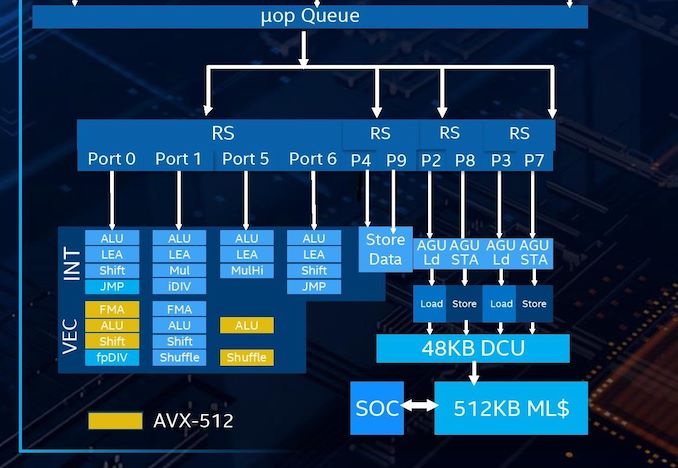 The L1 Data cache has increased, for the first time in over a decade. Intel has moved from a 32 KiB 8-way design up to a 48 KiB 12-way design, which should help reduce data cache misses significantly. This combined with the micro-op cache size increase is one of the easiest ways to reduce cache miss penalties. (For comparison, in Zen 2 AMD halved its L1-I size and doubled its micro-op cache, which it felt was a more efficient way of improving instruction throughput, but also the silicon area design had to be managed.)

Intel has also increased the L2 cache, up from 256 KiB to 512 KiB, and it is still non-inclusive of the L1 with a write-back policy. In order to assist the L2, the L2 TLB page table arrangement has also been improved, with up to 2k entries at 4K, 1k entries for 2M/4M (new, used to be shared with 4K), and up from 16 entries to 1024 entries at 1G. The cache improvements on Sunny Cove are certainly expected to work in Intel’s favor, especially when it comes to the enhanced graphics part of the design.

On a core-to-core level, Intel's recent designs have the following configurations:

Overall the design allows for:

The parts highlighted in bold are different in the Sunny Cove core.

The core improvements can be summed up as follows: 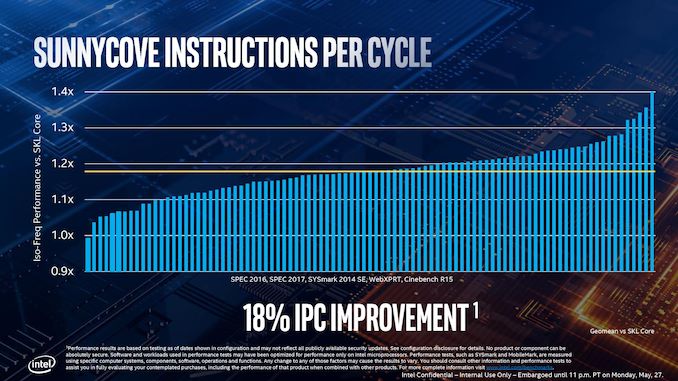 When AVX512 is in play, with DLBoost, Intel is promoting a 2.0x-2.5x increase against the best Whiskey Lake has to offer. 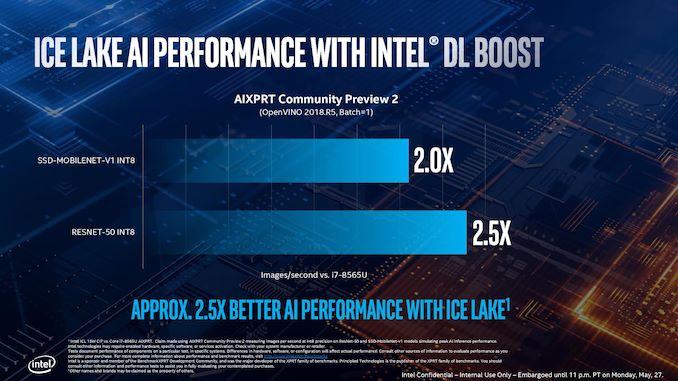