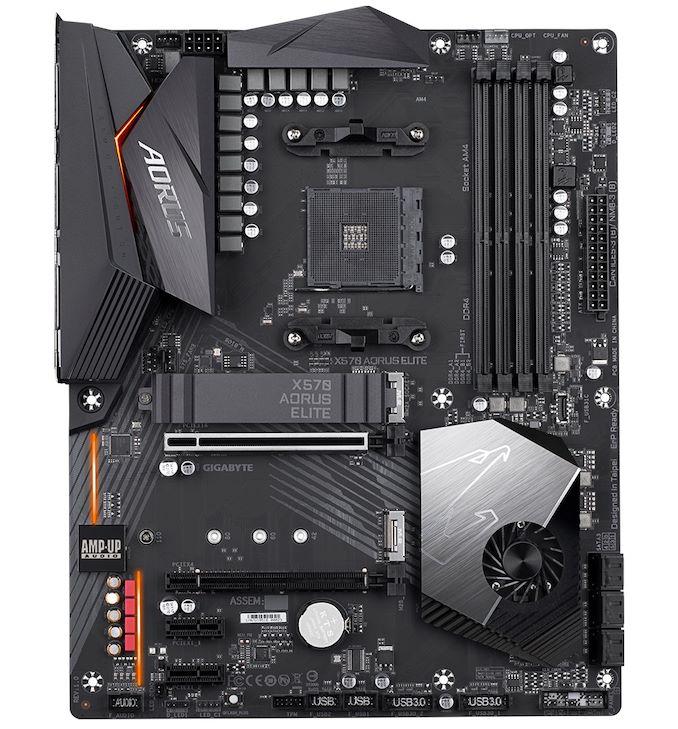 On the boards aesthetic, GIGABYTE has gone with a subtle black and silver theme with black power delivery heatsinks, and a silver and black X570 chipset heatsink which includes a cooling fan. This model includes two full-length PCIe 4.0 slots with the top slot running at x16, and the bottom locked down to x4 which is handled directly by the X570 chipset. The GIGABYTE X570 Aorus Elite also has two PCIe 4.0 x1 slots, as well as two PCIe 4.0 x4 M.2 slots, with the top slot which comes with an M.2 heatsink. For users with SATA based drives, there is a total of six SATA ports with support for RAID 0, 1, and 10 arrays. The 12+2 phase power delivery is running from an ISL69138 PWM controller which is operating in 6+1; this model is one of just a handful to include one 8-pin 12 V ATX CPU power input for delivering power to the processor.

The rear panel of the X570 Aorus Elite includes two USB 3.1 G2 Type-A, four USB 3.1 G1 Type-A, and four USB 2.0 ports. There's no USB Type-C available on this model, but there is a single HDMI video output, as well as an Intel I211-AT Gigabit NIC controlled Ethernet port. The onboard audio which consists of five 3.5 mm audio jacks and S/PDIF optical output are driven by a Realtek ALC1200 HD audio codec. On the rear panel of the GIGABYTE X570 Aorus Elite WIFI is two antenna adapters for the Intel AX200 Wi-Fi 6 802.11ax wireless interface and also adds BT 5.0 connectivity to the board.

The GIGABYTE X570 Aorus Elite has an MSRP of $199, while the Wi-FI 6 enabled version comes in with an MSRP of $209; that's $10 extra for the same board with an Intel AX200 802.11ax wireless interface. Both models represent a good feature set for a reasonable price, and users looking for a gaming-themed model with a seemingly decent power delivery and two PCIe 4.0 x4 M.2 slots, both these models stake a good claim for good value.