The GIGABYTE X570 I Aorus Pro WIFI is the vendors only small form factor model in its X570 product stack. GIGABYTE introduces its X570 I Aorus Pro WIFI model into the mid-range segment with a nice variety of features including a mini-ITX frame with a 6+2 power delivery, an Intel Wi-Fi 6 wireless interface, and a Realtek ALC1220-VB audio codec. 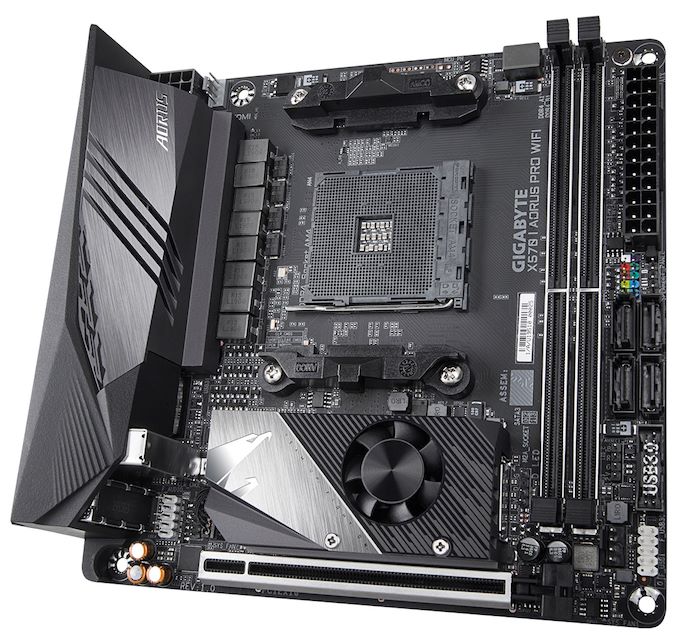 Firstly, there are two DDR4 memory slots which support up to 64 GB. Storage is provided by four SATA straight-angled ports, with two PCIe 4.0 M.2 slots, one of which includes a thermal guard which works in collaboration with the actively cooled X570 heatsink; the other is located on the rear of the PCB. The X570 I Aorus Pro WIFI has a single full-length PCIe 4.0 slot which has a coating of metal armor reinforcement. In the top-right corner are two memory slots which support DDR4-440 with a maximum capacity of up to 128 GB. For enthusiasts and performance junkies, the GIGABYTE X570 I Aorus Pro WIFI has an 8-phase power delivery using International Rectifier MOSFETs in a 6+2 configuration. The rear panel cover is also quite elegant with a metal finish further adding an element of premium to the board.

It's the controller set which makes this board a more mid-range offering with a single Intel I211-AT Gigabit port, a Wi-Fi 6 capable Intel AX200 802.11ax interface, as well as a Realtek ALC1220-VB HD audio codec which drives the three 3.5 mm audio jacks. Also on the rear panel is dual HDMI outputs with a DisplayPort too, making this board suitable for multi-display capable for use with Ryzen based APUs. Aside from a single USB 3.1 G2 Type-A, and Type-C, the rest of the boards USB capabilities come from USB 3.1 G1 Type-A ports.

With a solid blend of aesthetics, a neatly packed in active cooled M.2 and X570 chipset heatsink, the GIGABYTE X570 I Aorus Pro WIFI has a decent feature set. The GIGABYTE X570 I Aorus Pro WIFI is also a bit of a mouthful, so I'm not too keen on such a longly named product SKU, but for users looking for a competitively priced mini-ITX model, this board has an MSRP of $219 at launch.