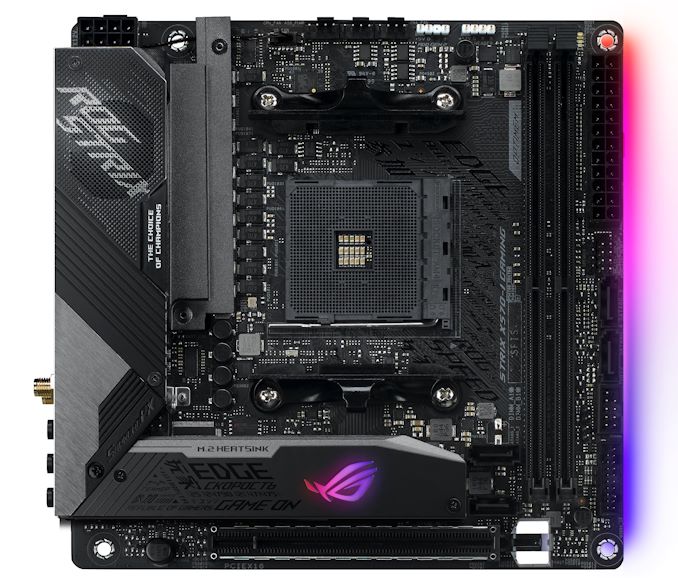 There is a single full-length PCIe 4.0 x16 slot in addition to two memory slots with support for up to 64 GB of DDR4 memory. The aesthetic is similar to the ATX sized X570 Strix models with a graffiti-inspired graphic on the M.2 heatsink, which also extends around to the rear panel cover for a uniformed look. There is RGB LED lighting built into the heatsink, with a strip underneath the right-hand side of the PCB for an ambient styled glow. In terms of storage, the ASUS ROG Strix X570-I Gaming has eight SATA ports and two PCIe 4.0 x4 M.2 slots; one is located on the front just above the full-length PCIe 4.0 x16 slot which includes a heatsink, while the other sits on the rear of the boards PCB.

The ASUS ROG Strix X570-I Gaming at present doesn't have an MSRP as isn't being launched with the rest of its product stack, and it represents the only mini-ITX sized model in the line-up; the ROG Crosshair VIII Impact is actually mini-DTX. A mixture of premium components, good storage capabilities and a Wi-Fi 6 802.11ax wireless interface an attractive model for users looking to build a potent small form factor gaming system.