The QD1 burst sequential read performance of the Samsung 970 EVO Plus is a clear step up from its predecessors, but the Silicon Motion-based HP EX920 and ADATA SX8200 are still a few percent faster. 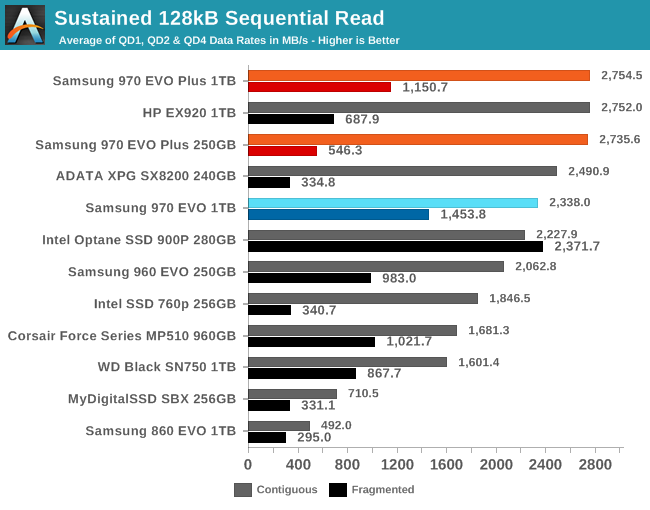 On the longer sequential read test with some higher queue depths, the Samsung 970 EVO Plus is tied for first place when reading contiguous data. When reading back data that was written randomly and is likely to be fragmented on the NAND itself, the 970 EVO Plus's performance has regressed but is still ahead of almost all of the competition, especially the SMI-based drives that score so well on contiguous data.

The 970 EVO Plus takes the clear lead for power efficiency when reading contiguous data, but doesn't stand out when the data is fragmented.

The 970 EVO Plus significantly increases sequential read performance at queue depths from 2 to about 16. It doesn't quite hit full speed at middling queue depths, but it gets much closer than its predecessors, which don't improve much on their QD1 performance until around QD16. 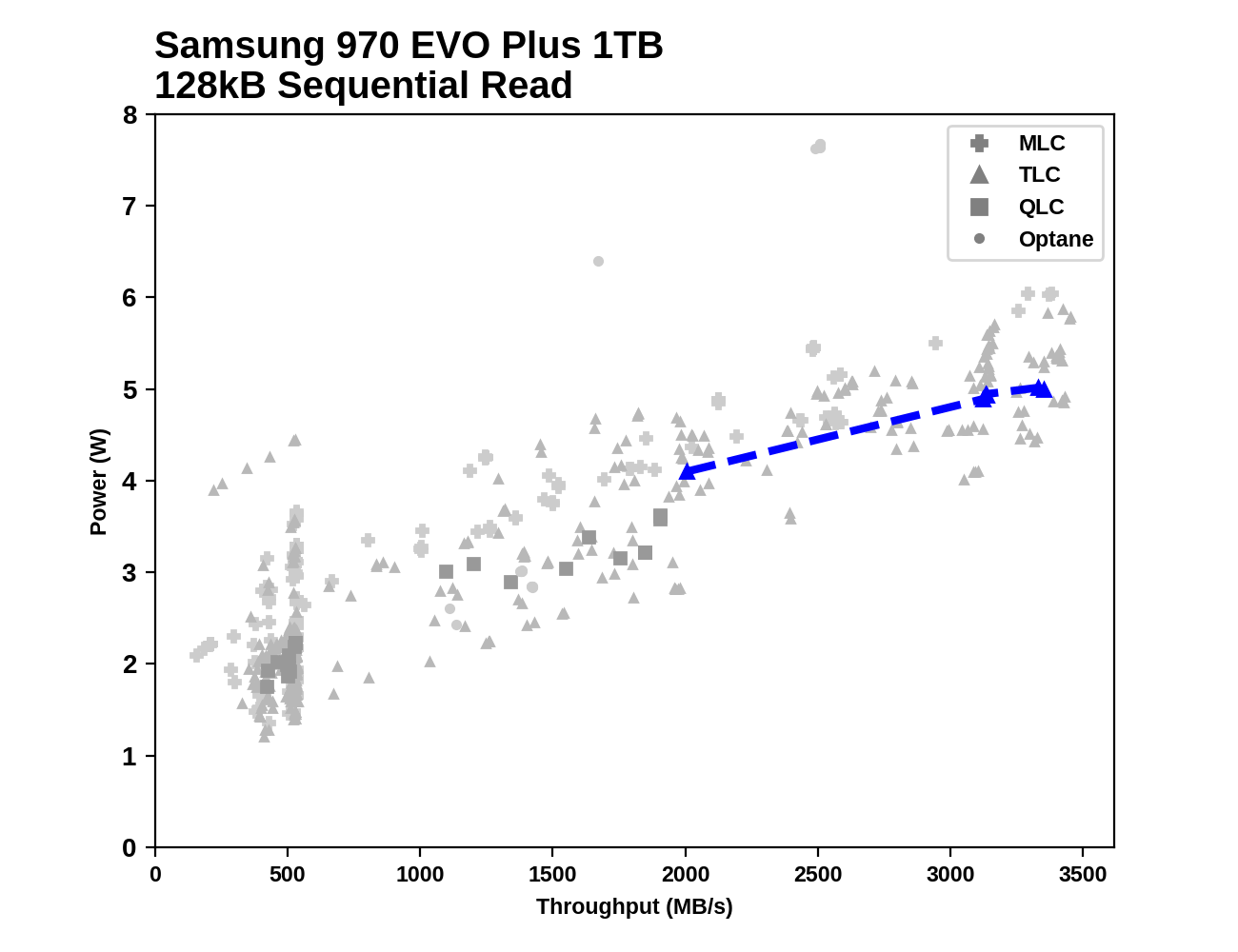 During the sustained sequential read test the 970 EVO Plus stays entirely within the upper half of the NVMe performance range, where the power efficiency competition isn't quite as strong. Below 2GB/s there are quite a few drives that are much more efficient than the 970 EVO, but above 3GB/s its power consumption doesn't stand out from the crowd.

The burst QD1 sequential write performance of the Samsung 970 EVO Plus is slightly lower than its predecessor's, but the 1TB model is still clearly in high-end territory. The 250GB model looks quite slow compared to the two generation old 250GB 960 EVO, but that drive uses 128Gb TLC dies and no current-generation NAND is available in capacities that low. The reduced parallelism available to the modern 250GB drives prevent them from delivering the full performance that their older or larger counterparts provide.

On the longer sequential write test that includes some higher queue depths, the 1TB Samsung 970 EVO Plus substantially improves upon the 970 EVO's lead. The smaller 250GB 970 EVO Plus is completely outclassed by the 240GB ADATA SX8200.

The Corsair Force MP510 is the only drive in this batch that shows serious performance variation suggestive of the SLC cache running out intermittently. The rest of the drives are either not filling their SLC write caches entirely, or fill them part way through each phase of the test but have no trouble flushing the cache during the idle time between phases (mostly the latter). The 240GB ADATA SX8200 has such a strong advantage over the 250GB 970 EVO Plus because the cache on the Samsung drive runs out quite quickly while the SX8200's ~72GB cache is plenty large enough to handle the 32GB written during each phase of the test. 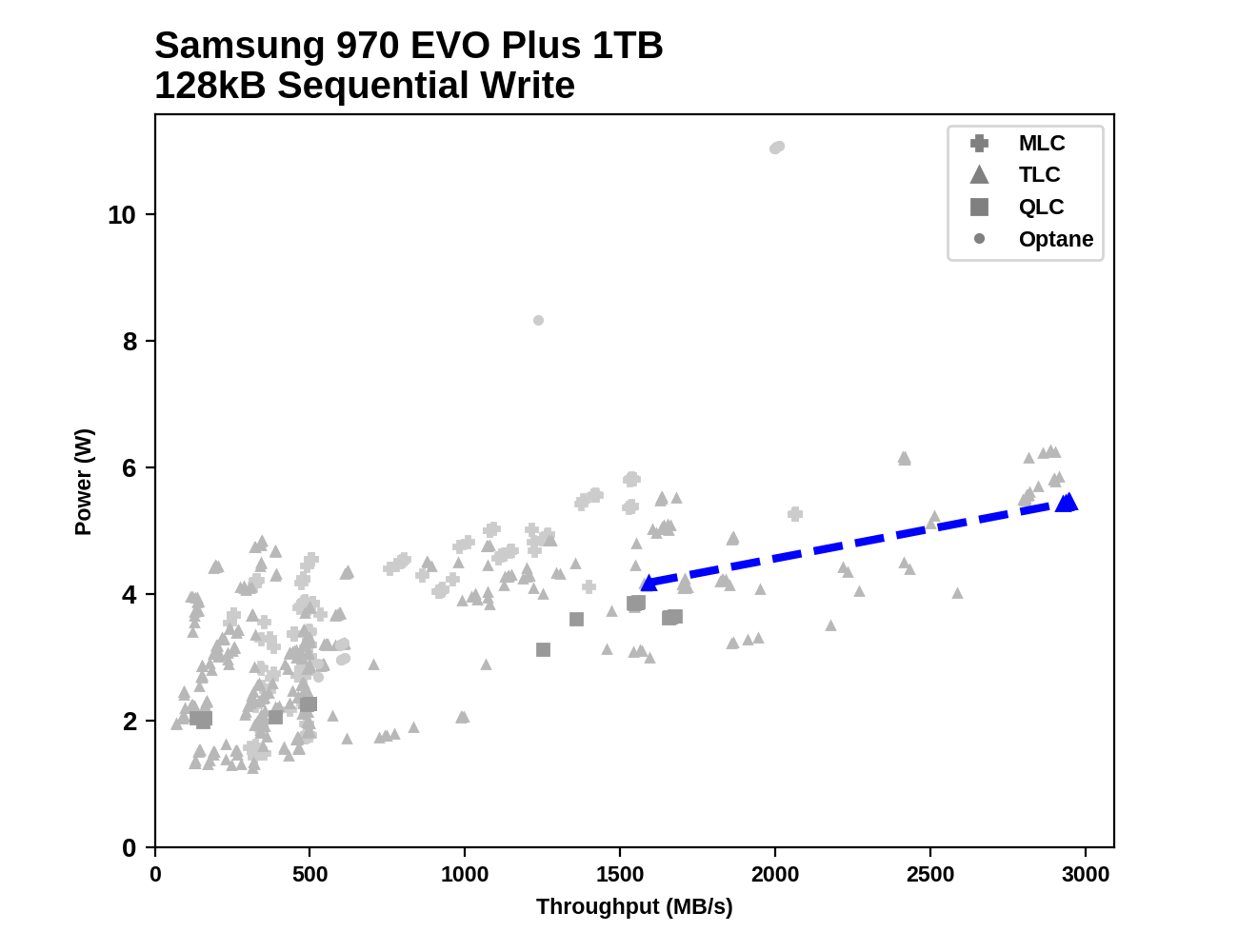 Of all the drives in our database that get close to 3GB/s during the sequential write test, none use less power than the 1TB 970 EVO Plus. There are several much more efficient drives that top out at around 2.6GB/s, but the very fastest drives all require 5-6W.