Intel 915 with BOTH AGP and PCI

We posted pictures of Gigabyte's "impossible" Intel 915 with both PCI Express (PCI-E) and AGP 8X in our preview coverage of Computex. As we reported, PCI-E and AGP on the same 915 board is supposedly an impossible engineering feat. Well, Gigabyte is not alone with the bright idea of AGP 8X and PCI Express slots on the same Intel 915 board. ECS has a similar feature on one of their new high-end 915 boards. 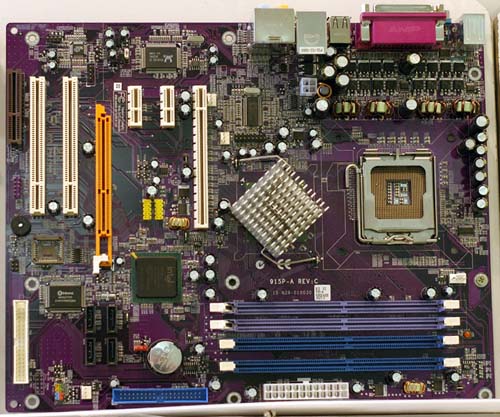 
ECS calls their AGP slot on the 915 "AGP eXpress". Both ECS and Gigabyte claim they have not used a bridge chip in their new design - deriving the AGP 8X support from the PCI Express signals. We've done some digging and it appears this is only part of the story. We've put together a separate news story explaining how ECS and Gigabyte accomplish this task of bringing AGP and PCI Express to their Intel motherboards. Read our article entitled: AGP on Intel 9xx Chipsets? We explain how.