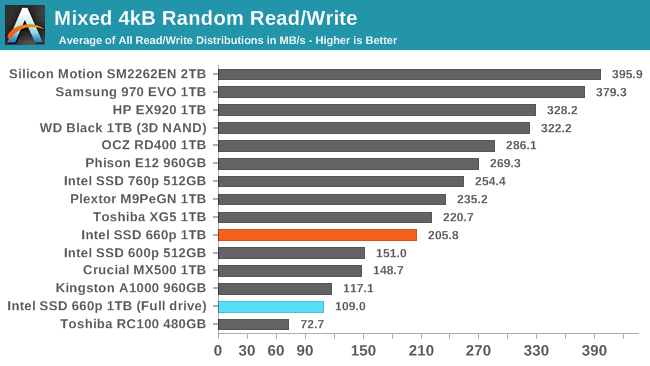 The mixed random I/O performance of the Intel SSD 660p is clearly above the other low-end NVMe drives we've tested, or the Crucial MX500 SATA drive. It scores closer to a mid-range NVMe SSD. After filling the drive, performance is cut in half, leaving it performing near low-end NVMe drives like the Phison E8-based Kingston A1000 and below the MX500.

The power efficiency of the 660p during the mixed random I/O test is unimpressive but doesn't stand out as being significantly worse that other low-end NVMe drives even when the test is run on a full drive.

The Intel SSD 660p shows very slow performance growth throughout most of the test, but it picks up speed reasonably well toward the end as the workload shifts toward pure writes, and the SLC cache handles things well. When the drive is full, the reduced capacity of the SLC cache prevents speed from increasing much. 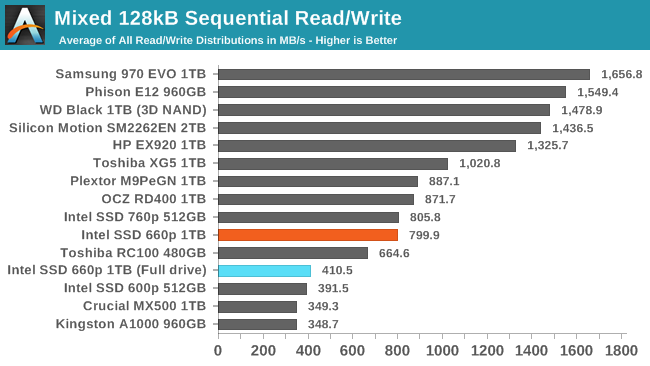 The Intel SSD 660p performs better than other entry-level NVMe SSDs or SATA drives when the mixed sequential I/O test is run on a mostly empty drive with a large SLC cache. After the drive is filled, performance drops down to slightly ahead of the 600p and Crucial MX500.

The power efficiency of the Intel SSD 660p during the mixed sequential I/O test is decent when operating entirely out of the SLC cache, and on par with most other low-end NVMe drives when the 660p is full.

When the test is run on a mostly-empty 660p the performance shows a very typical bathtub curve and no sign of the SLC cache running out. When the drive is full, performance decreases steadily as the proportion of writes increases.