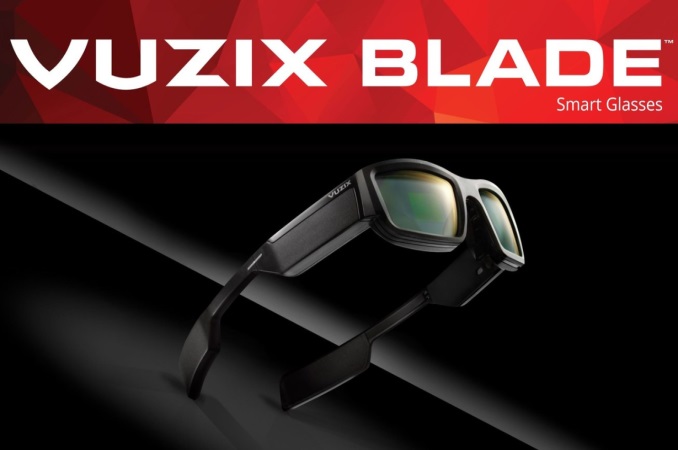 LAS VEGAS, NV -- Vuzix announced that its latest product would debut next week, and it may be the breakthrough in AR devices that we’ve been waiting for. The Vuzix Blade could be among the first smart glasses that fit in a familiar, comfortable form factor and don’t look like a technophile's goofy gadget.

"What differentiates the Vuzix Blade from all existing or proposed AR smart glasses and mixed reality head-mounted computers, is that it’s built for today’s user," said Paul Travers, President and CEO of Vuzix in a press release. "With a fashionable form factor, a brilliant display, and a broad range of features that allow the user to experience AR at work or play, the Vuzix Blade is the first pair of smart glasses that people would actually enjoy wearing."

He also stated that the spectacles will work "right out of the box, without the need for programming."

From the outside, the Vuzix Blade Smartglasses look like a standard (yet chunky) pair of eyeglasses. They sport an unsuspecting frame, with transparent prescription-capable lenses. Vuzix said it designed the Blade Smartglasses to be comfortable for all-day use, and it managed to cram all the internals into a compact package that weighs less than 3 oz.

The Vuzix Blade Smartglasses are powered by an undisclosed quad-core ARM CPU, and they operate on a custom build of Google’s Android OS. The device includes a touchpad input, and it has a noise canceling microphone for voice. You can also pair them with an Android or iOS smartphone to let you accept phone calls through the device. When thusly paired, the Blade Smartglasses can also integrate with the applications on your phone to receive visual notifications, such as text messages or GPS alerts. It will also provide social network notifications and weather updates.

Vuzix stuck a tiny projector called the Cobra Display Engine in the right side of the device. It projects light into the company’s proprietary Waveguide Optics. Vuzix didn’t say how wide the field of view is in the Blade Smartglasses but did confirm that the FOV is adjustable and provides a “sizeable virtual screen” for digital content. The company also said that its Waveguide optics produce a “brilliant palette of colors” with adjustable brightness.

Vuzix also equipped the Blade Smartglasses with a front-facing 1080p video camera that can capture first-person video of your activities. The camera can also take 8MP still photos.

The Blade Smartglasses were designed to be a consumer device, but the almost $2,000 price tag suggests otherwise; when the Oculus Rift and HTC Vive hit the market for $599 and $799, respectively, most consumers balked at the idea of paying so much. It is true that Vuzix didn’t reveal the retail price of the Blade Smartglasses, but the company is currently accepting reservations for developer kits, and you’ll need deep pockets to secure a pair: To put your name on the list, you have to plunk down a $495 deposit. But before Vuzix ships you a pair, you’ll have to settle the remaining balance of $1,502. For that price, developers receive a pre-production unit and a production pair, when they’re ready to go. Given those numbers, we expect the final product to sell for anywhere from $700 to $1,200.