Measuring the full bandwidth potential with John McCalpin's Stream bandwidth benchmark is getting increasingly difficult on the latest CPUs, as core and memory channel counts have continued to grow.  We compiled the stream 5.10 source code with the Intel compiler (icc) for linux version 17, or GCC 5.4, both 64-bit. The following compiler switches were used on icc:

Notice that we had to increase the array significantly, to a data size of around 6 GB. We compiled one version with AVX and one without.

Meanwhile the following compiler switches were used on gcc: 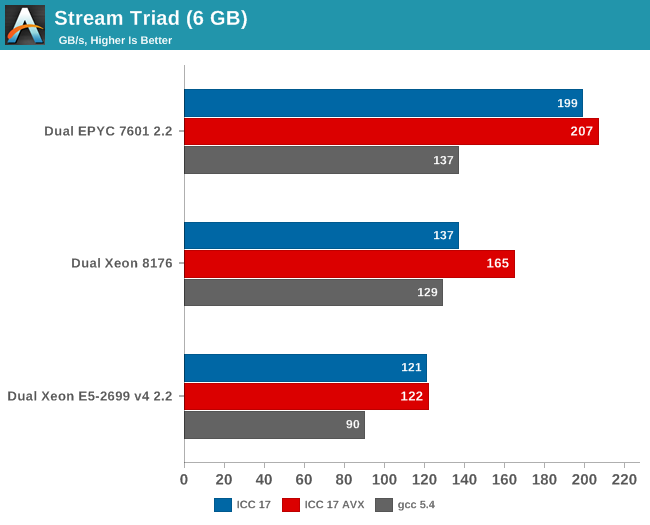 AMD told me they do not fully trust the results from the binaries compiled with ICC (and who can blame them?). Their own fully customized stream binary achieved 250 GB/s. Intel claims 199 GB/s for an AVX-512 optimized binary (Xeon E5-2699 v4: 128 GB/s with DDR-2400). Those kind of bandwidth numbers are only available to specially tuned AVX HPC binaries.

Our numbers are much more realistic, and show that given enough threads, the 8 channels of DDR4 give the AMD EPYC server a 25% to 45% bandwidth advantage. This is less relevant in most server applications, but a nice bonus in many sparse matrix HPC applications.

Maximum bandwidth is one thing, but that bandwidth must be available as soon as possible. To better understand the memory subsystem, we pinned the stream threads to different cores with numactl.

The new Skylake-SP offers mediocre bandwidth to a single thread: only 12 GB/s is available despite the use of fast DDR-4 2666. The Broadwell-EP delivers 50% more bandwidth with slower DDR4-2400. It is clear that Skylake-SP needs more threads to get the most of its available memory bandwidth.

Meanwhile a single thread on a Naples core can get 27,5 GB/s if necessary. This is very promissing, as this means that a single-threaded phase in an HPC application will get abundant bandwidth and run as fast as possible. But the total bandwidth that one whole quad core CCX can command is only 30 GB/s.

Overall, memory bandwidth on Intel's Skylake-SP Xeon behaves more linearly than on AMD's EPYC. All off the Xeon's cores have access to all the memory channels, so bandwidth more directly increases with the number of threads.