Microsoft has been the PC maker that has focused on display quality more than any other. And in only a few generations, they have become known for having the best displays of any company. It could be argued (and I would argue it strongly) that the Surface Studio has the best display of any consumer device for sale right now, even if Windows doesn’t yet offer full color management to take complete advantage of the DCI-P3 and P3 D65 display settings on the Studio.

The Surface Pro keeps the same display panel as the Surface Pro 4, with a 12.3-inch 2736 x 1824 display. That works out to 267 pixels per inch, in a 3:2 aspect ratio. The saying goes, if it isn’t broken, don’t fix it, and that’s the case here. Surface Pro 4 was easily the best display in its category, and offering more pixels per inch would be a game of diminishing returns for increased power requirements, leading to lower battery life, so the decision to stick with this panel was a great one. 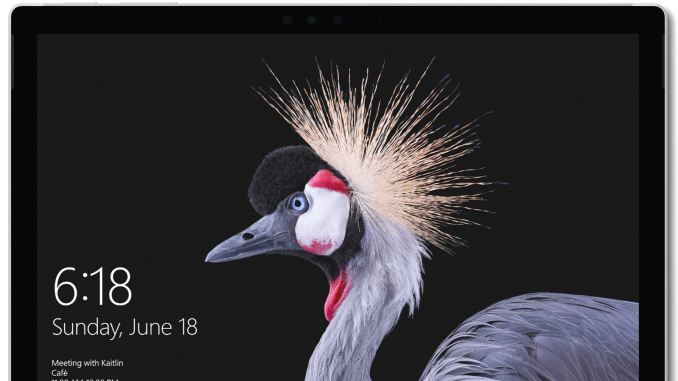 However, not everything is identical. After building a system to change the color gamut for Surface Studio with a simple toggle in the Action Center, Microsoft took the same idea and put it to use on the Surface Pro. Since the Surface Pro is still only a sRGB display, it’s not quite the same as the Surface Studio being able to change from sRGB to DCI-P3 to P3 D65, but it does offer an Enhanced sRGB mode. What does that do exactly?

That’s the answer from Microsoft. It changes the tone map on colors to make them a bit more vivid, while still staying within the sRGB gamut, and without blowing out skin tones, making people look odd colors. In practice, it seems to work pretty well, offering a bit more pop, but without going overboard. It sounds like something that needs some data to sort it out though, so we’ll take a look at the Enhanced mode as well as sRGB mode.

One other note about the display that came up during testing is that it appears to have content adaptive backlight control (CABC) enabled by default. The effects were not nearly as dramatic as some of the other devices we’ve seen with it, but it would still shift the brightness by 20-30 nits. We’ll dig into that and see if we can get an answer, but with the limited time we’ve had the device, it’s only really stood out when trying to run the display testing. 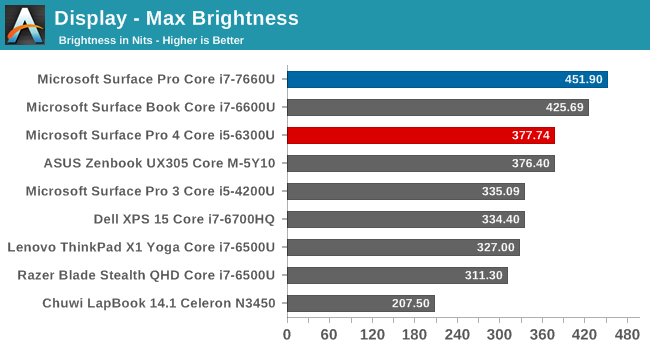 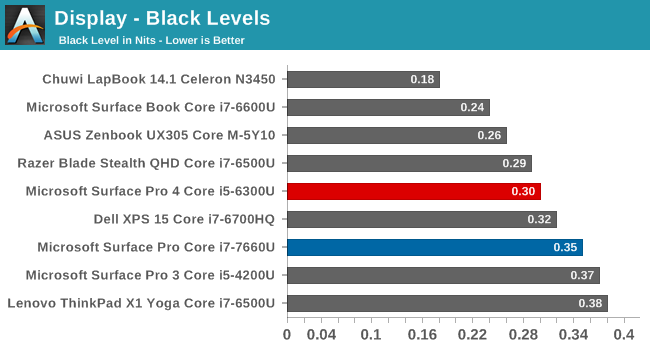 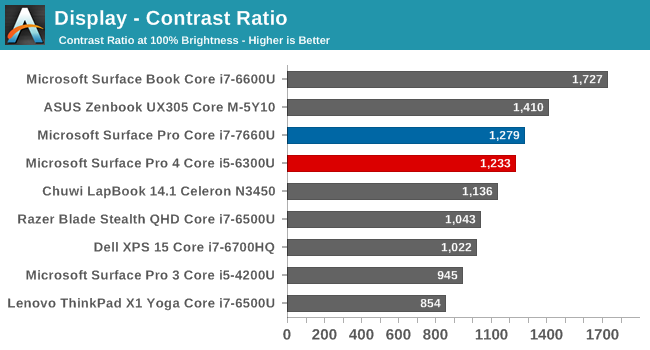 Any time you need to use a laptop or tablet outside, having a very bright display can be a very nice boost to usability. Here we see the Surface Pro has an outstanding 451 nits of brightness, making it one of the brightest PCs we’ve seen. Despite the high brightness, the black levels are still quite good, leading to a contrast ratio of 1279:1. It’s not quite Surface Book levels, but it’s still a great result. For those that want to use the device in a dark room, the display goes all the way down to 4 nits as well. 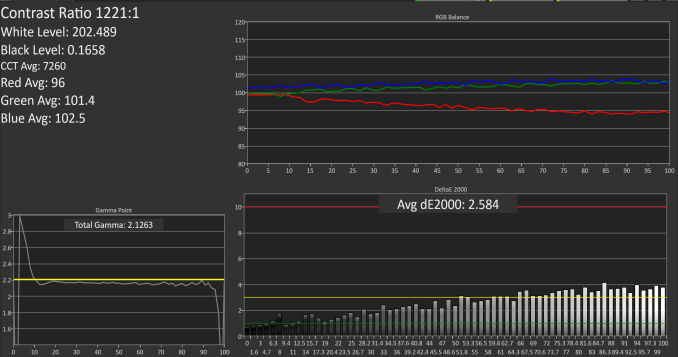 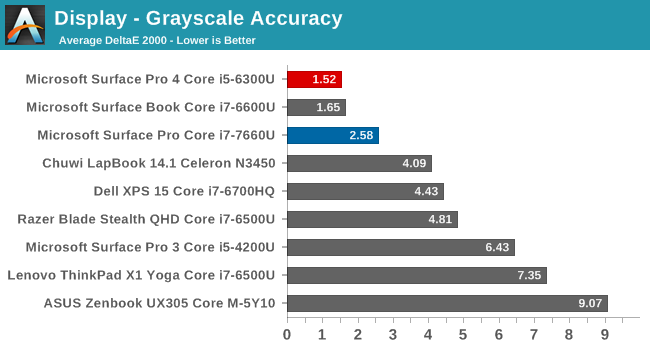 In sRGB mode, the grayscale results are good, but not perfect. The red levels drop off as the brightness increases, leading to a slightly cool display. The gamma levels are very close to the 2.2 level though, with some issues near 0% and 100% only. The model we received for review is a pre-production unit, so it’s possible the grayscale will be more accurate on shipping versions, or it could be because of the adjustable gamut. The average is still fairly good, but it's measurably worse than the Surface Pro 4 we've tested, and does cross the 3.0 level closer to 100% brightness. 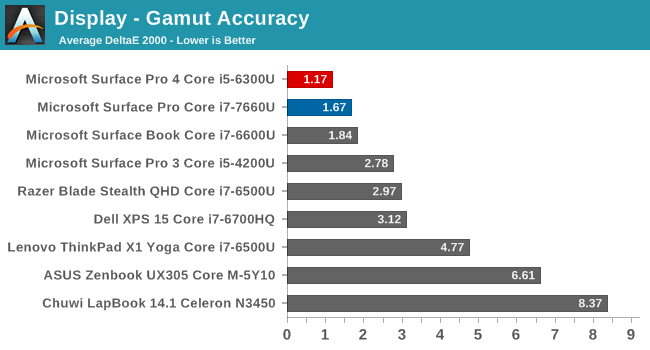 We’ve switched to 4-bit levels for the saturation sweeps, which is more accurate, but makes it difficult to see the gamut coverage clearly, so this test just shows the 100% levels to portray how much of a gamut the display can cover. You can see that the Surface Pro almost perfectly covers the sRGB color space. 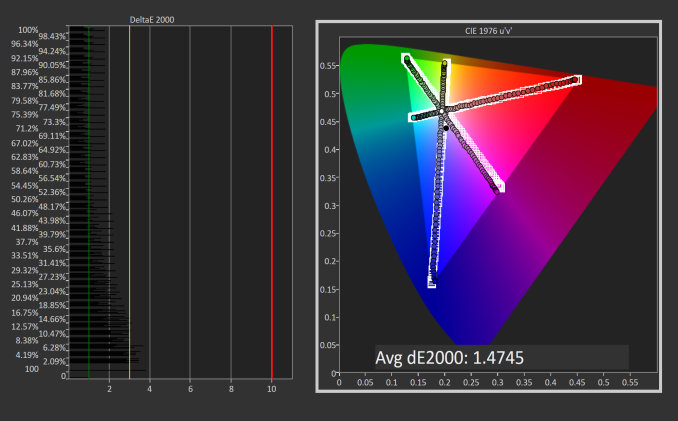 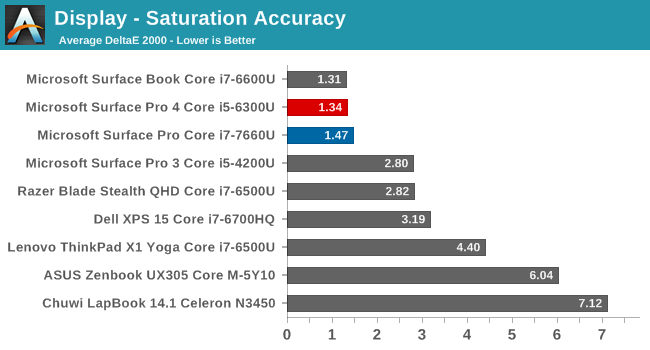 Although not quite hitting the amazing average of the Surface Pro 4 and Surface Book, even with the more demanding 4-bit steps on the saturation sweep, the Surface Pro is one of the best devices we’ve tested. 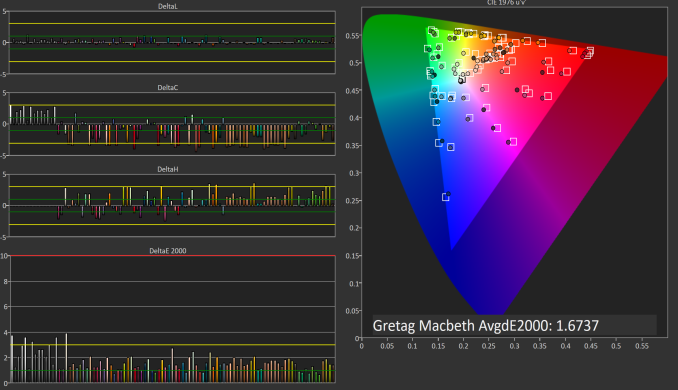 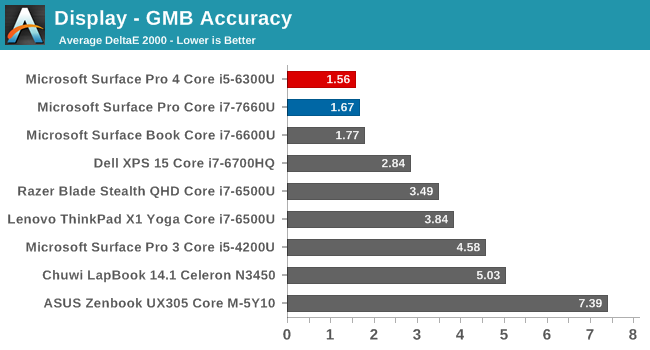 The colorchecker is the most comprehensive test, testing many more colors outside of the primaries and secondaries, and including the skin tones. Once again, the Surface Pro is one of the best devices we’ve tested.

As stated above, the Surface Pro now includes an enhanced sRGB mode. It remaps the color tones slightly, but keeps it within the sRGB color space. It’s not going to be as accurate as the sRGB mode, which we just saw is very accurate to the sRGB gamut, but the enhanced mode is likely to provide many people with the more pleasing look that gives a bit more pop to the colors.

We’ve run the enhanced mode through the display testing as well to see what kind of effect it has on the display. 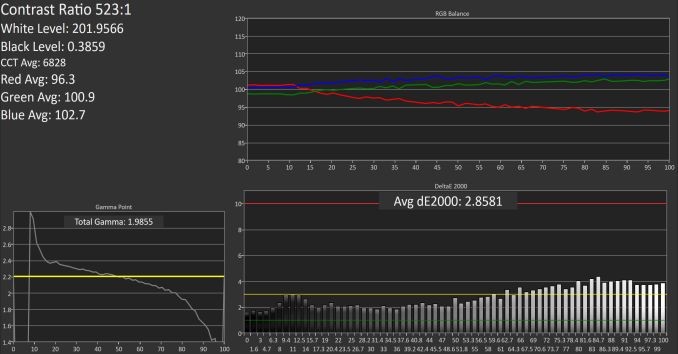 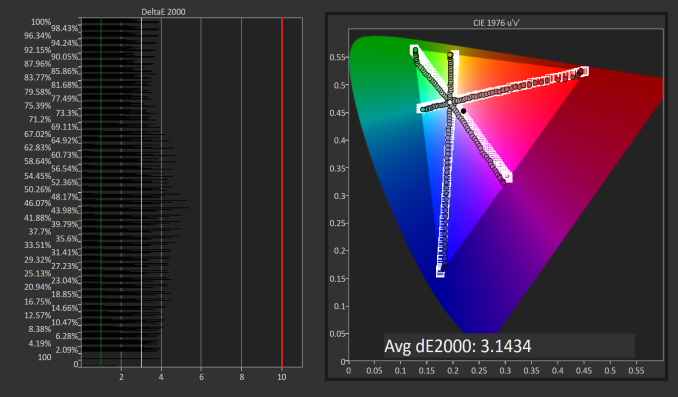 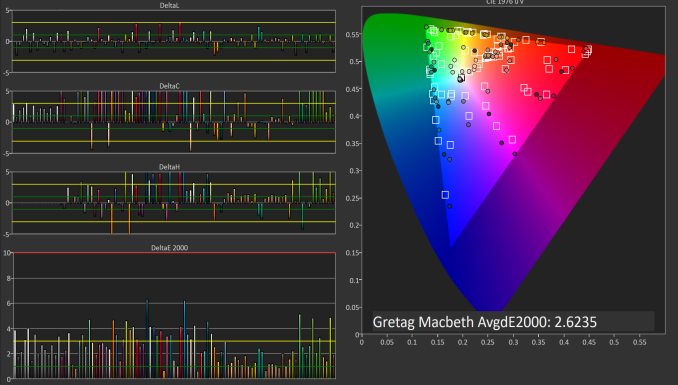 First off, you can see that the gamma is much lower than it should be. That’s not a surprise with the explanation Microsoft provided earlier on what the enhanced mode is, since they wanted to increase the contrast between the colors.

Looking at the saturation sweep, you can see the colors pulled slightly off the axis, with green having a large swing close to 100% green. All of the colors are tweaked somewhat though, especially as they get brighter.

Finally, looking at the Gretag MacBeth test, you can see that, in fact, the skin tones are not affected by this tone mapping, but the blues, reds, and greens are adjusted quite a bit.

Microsoft’s explanation for the Enhanced sRGB mode is exactly true. There is more contrast between colors, and the colors are tone-mapped but skin tones are not changed. It’s nice to see a toggle to still allow sRGB mode if people need to do color critical work, but as we've seen before in other products, many people are likely going to prefer the increased pop from the colors on Enhanced Mode, even though they're not as accurate. Even with this deviation from the sRGB specification, this would still be considered one of the more accurate displays available, considering the Gretag Macbeth dE2000 is still less than three.