Jon Peddie Research reports that NVIDIA shipped approximately 9.25 million desktop GPUs (up 39.8% QoQ) and increased its notebook GPU shipments by 38.7% sequentially in calendar Q3. NVIDIA does not officially disclose the number of graphics processors it sells, but the company’s revenue for gaming-grade GPUs skyrocketed to $1.244 billion in its Q3 FY2017 (ended October 30, 2016), so it is logical to assume that shipments of its graphics chips (both for desktops and notebooks) were very strong in the calendar third quarter as well.

“Gaming revenue crossed the $1 billion mark and increased 63% year-on-year to a record $1.24 billion, fueled by our Pascal-based GPUs,” said Colette M. Kress, CFO of NVIDIA, during the company’s earnings conference call. “Demand was strong in every geographic region across desktop and notebook, and across the full gaming audience, from GTX 1050 to the TITAN X.” 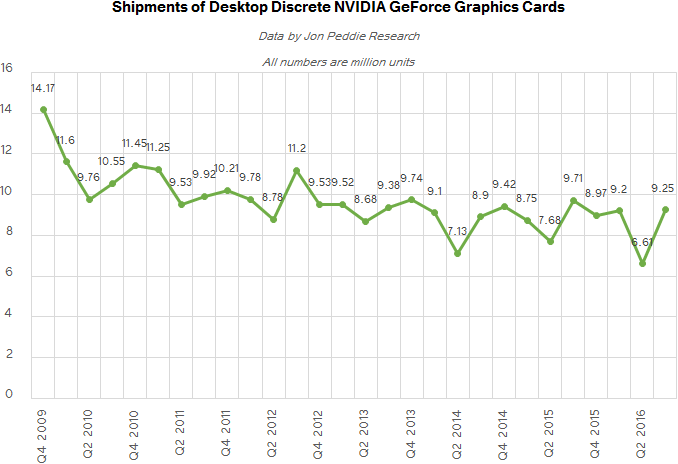 NVIDIA itself attributes its success in the third quarter to sales of its Pascal-based products — the GeForce GTX 1060, 1070 and 1080 as well as their mobile brethren. Since such boards start at $199 and their ASP should be considerably higher than that, it is not surprising that NVIDIA earned a lot despite a decrease in unit sales compared to Q3 in 2015. Unfortunately, we do not know exact rankings of AMD and NVIDIA in the enthusiast part of the market in terms of units, but it looks like the green company commands the lion’s share of this lucrative segment in terms of both units and dollars. Moreover, this situation is going to last for some time before AMD introduces its next-generation Greenland/Vega GPUs. 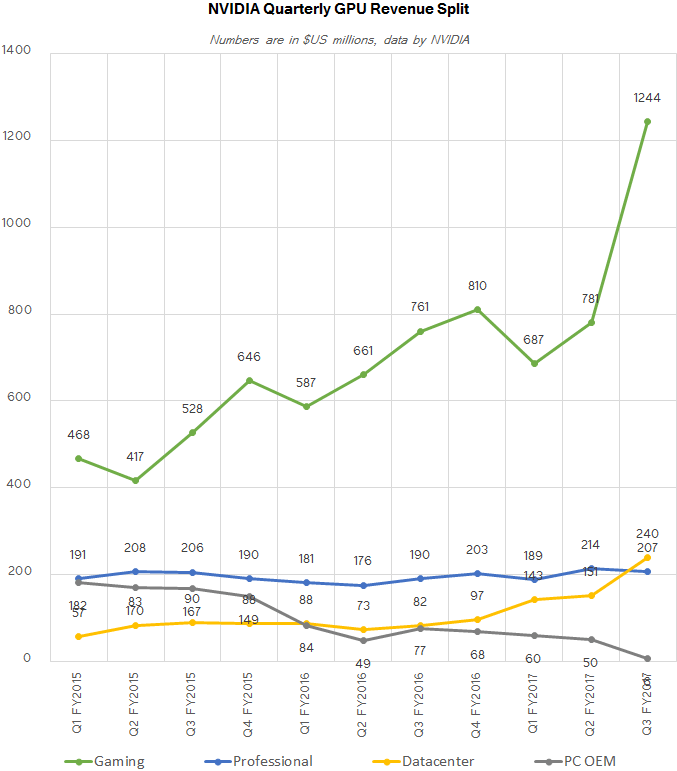 For the three-quarters so far in 2016, NVIDIA has sold approximately 25 million of desktop discrete GPUs. This is ~4% lower than in the first three quarters of 2015 (around 26 million). Nonetheless, despite slightly lower unit sales, the company is thriving financially due to higher ASPs. Moreover, NVIDIA’s management implies that demand for its desktop GPUs is still very high and sales of graphics cards may increase in Q4 as a result of improved yields and/or increased allocation at TSMC. If this happens, the company could sell around 35 million desktop GPUs in total this year, the same amount as in 2015.

“In terms of Pascal, we are still ramping,” said Jen-Hsun Huang, CEO of NVIDIA. “Production is fully ramped in the sense that all of our products are [certified and qualified with OEMs], they are on the market. However, demand is still high. So, we are going to continue to work hard, and our manufacturing partner TSMC is doing a great job for us.” 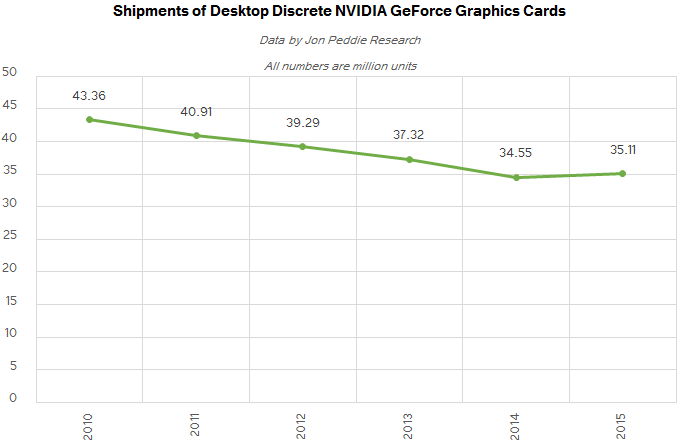