It's rare that I do one of these first-person 'editorially' pieces but they do come around once in a blue moon. What inspires them, you may ask? Usually there's a handful of information that I've come across but it lacks any sort of common theme, there's just new news from all over the industry that I'd like to update you all on.

A couple of weeks ago I was out on the West Coast visiting a few manufacturers and that's where the basis for this piece comes from. So without further ado, let's talk about one of my first stops - Shuttle.

Well over half of Shuttle's revenue these days comes from their line of XPCs, more commonly known as the Shuttle "cubes" or small form factor PCs. This is rather interesting as just a few years ago you would not find a motherboard manufacturer making most of their money off of something other than motherboards.

We are in very difficult times, and the motherboard guys have been feeling the pain for quite some time now. Unless you're one of the big guys (ASUS, Gigabyte, MSI), surviving in the motherboard industry is very difficult. A lot of the smaller players have been fading away, while others have put in the extra effort to find new ways of generating revenue in a highly commoditized and price competitive industry. Looking at both the CPU and GPU markets where only a handful of competitors remain, it may not be long before the healthy list of motherboard manufacturers is reduced to 4 or 5.

Shuttle's bet was on this XPC idea, something that would let them not only survive as a company but flourish as well. The bet turned out to be the right one as Shuttle ships tens of thousands of these XPCs per quarter, currently at 70,000 units per quarter and steadily approaching 100,000.

We got the chance to sit down with the brains behind Shuttle's XPCs as he gave us a tour of Shuttle's XPC - past, present and future. 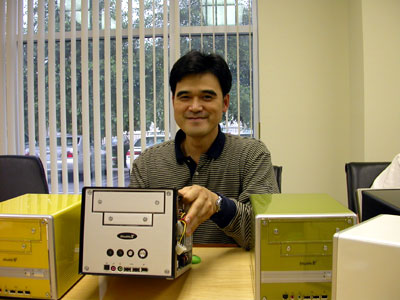