Every monitor and television has an internal lookup table, which is independent of the LUT used by the GPU in the connected device. This is essentially a stored list of calculations that define what output value should be displayed on the monitor for a given input value from a computer or set top box. This may or may not be user accessible, and high end monitors will have a high precision internal lookup table which is really more like a 3D cube that can be used to adjust intermediate points of gradation where colors are blended instead of simply adjusting three individual tables for each primary color. While that is beyond the scope of this article, the concept of a monitor's LUT is important to the topic of monitor display modes. Wide gamut monitors almost always have an sRGB display mode which constrains the display to the sRGB gamut, and this is accomplished at the level of the display's LUT with no connection to the OS or to a GPU's LUT.

With the previous section discussing how ICC profiles are used to make the OS and its applications aware of a monitor's native color space, you may be wondering what the point of offering a narrower gamut display mode is. Before moving on, I need to cover one other point about color management.

The function that performs the transforms between different color spaces is called the color management module, or CMM for short. If one wants to think of color management as a stack or a chain, you have color descriptions in ICC profiles on top, with the CMM sitting in the middle, and your color management API on the bottom for programs to access. When content that is not made in the display's native color space is encountered, the color management module first looks at the data provided about the content's color characteristics. It then transforms these values into an intermediate color space based on the CIE 1931 color space, which encompasses all colors that can be seen by the human eye. This is called the profile connection space, or the PCS. From the PCS, the values are then mapped into the target color space of the display, and in theory this should provide an "accurate" representation.

In the case of moving from a smaller gamut to one that is a superset of it, the content should look identical to a reference display for the content's native color space, as the larger gamut is perfectly capable of showing all the colors that exist in the smaller one, with those colors simply being defined by different coordinates. When moving from a larger gamut to a smaller one there needs to be a decision made about how to represent colors that can't even be shown in the target space. Typically, the solution has been to scale all colors appropriately to maintain the relative difference between colors, which means that the image is technically less saturated in areas where it could have been rendered natively, which is a tradeoff to properly maintain gradations within an image.

Unfortunately, the fact of the matter is that not all applications will play nice with OS level color management, particularly on Windows. In these situations, the system's color management module is never invoked, and no color management occurs at all. The typical result is that content is presented as though it was native to the monitor's color space, resulting in significant oversaturation and a completely inaccurate image. Because Windows is the most widely used operating system for computers, monitor manufacturers have gotten around the deficiencies of the system's color management by simply allowing users to use an sRGB mode that constrains the display's gamut at the level of the monitor LUT. This means that you lose any benefits of the wide gamut mode, but because most content is sRGB there's typically no difference, and when you do need to use a wide gamut for photo editing or other work you can toggle it back on temporarily. 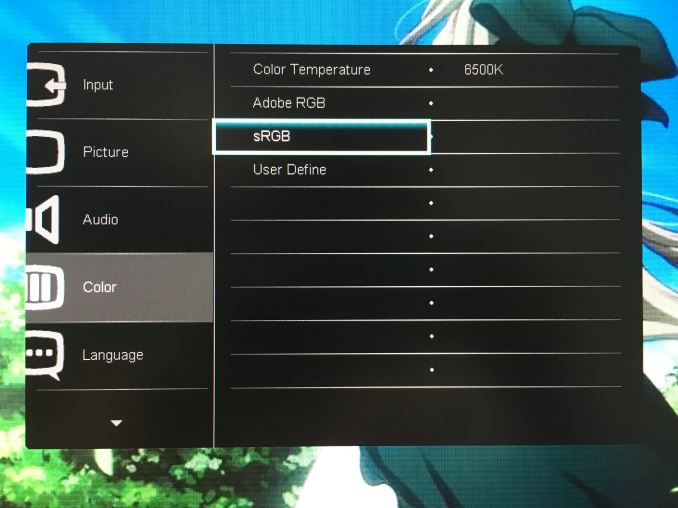 On the Philips 276E6, there is unfortunately no hardware-based solution to the color management problem provided. The issue is that there is no working sRGB display mode. In fact, the original unit I received had no sRGB mode at all, which I found quite surprising. After emailing QD Vision who then communicated with Philips, I was shipped a replacement unit that was apparently from a later production run where an sRGB mode was added. Upon setting it up I was delighted to see that there was an sRGB toggle in the settings menu, but this quickly faded as I realized that the setting did absolutely nothing, and I confirmed that by measuring the display in both the Adobe RGB mode and the sRGB mode.

To not have an sRGB mode is one problem, but to have the option and have it not even do anything is arguably much worse, as it's like advertising a feature that doesn't work rather than not offering it. With no way to constrain the gamut at the hardware level, the only solution is to use ICC profile and rely on applications being color managed. At this point another problem crops up, which is that the Philips 276E6 doesn't provide an ICC profile that properly characterizes its output, and so there's no way for applications to properly display images even if they do support color management. 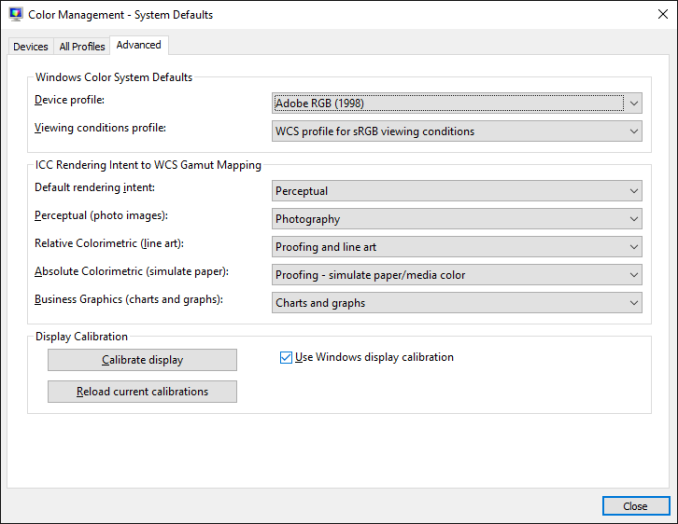 To fix the situation somewhat, you need to go back to the Windows Color Management settings, ensure that you've enabled calibration using the confusing steps that I described earlier, and finally set your device profile to the Adobe RGB (1998) profile in the drop down menu. If that profile isn't there by default, it's readily available on the internet and can be installed after downloading by right clicking and installing from the context menu.

Technically it's improper to use the standard Adobe RGB profile as the device profile, as the monitor is not perfectly matched to the Adobe RGB spec which is pretty clear based on our measurement results from earlier. However, it's the best solution there is when a proper ICC isn't provided, apart from using a $1500 spectrophotometer to make your own ICC which defeats the entire point of the 276E6's low price. It's worth noting that in my case I've set the device profile to Adobe RGB system wide, because I've been testing the Philips 276E6 on its own. For users with multiple displays this should be set for each display individually in the original settings screen depending on what gamut each one supports. At this point applications that support color management will render images more correctly, but applications being properly color managed is not a given. 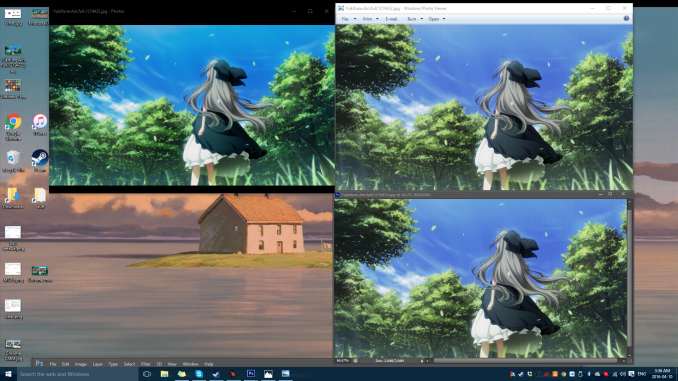 At both the OS level and the application level, there are programs that just don't play nice with color management. Above you can see an example of how the new Windows Photos app actually isn't displaying an image correctly, while the very old Windows Photo Viewer actually does, with Photoshop also there as a reference application that is known to support color management. One thing to note is that if you grab the images I've used off the web they'll actually look more like the improperly managed applications in these screenshots. This is due to the color transformations that I described earlier, with me explicitly choosing to target the sRGB color space in these screenshots grabbed from an Adobe RGB display, which reduces the saturation of colors to maintain gradations. I think the surrounding discussion makes it fairly obvious why I'm not relying on the proper rendition of Adobe RGB tagged images to demonstrate this, and since the relative difference between colors is maintained it doesn't have any impact on the comparison.

These issues extend to other parts of Windows as well, including areas such as the wallpaper. When the core image applications of an operating system aren't managing color properly, especially such basic things like the desktop wallpaper, it's difficult to imagine that third party software is either. 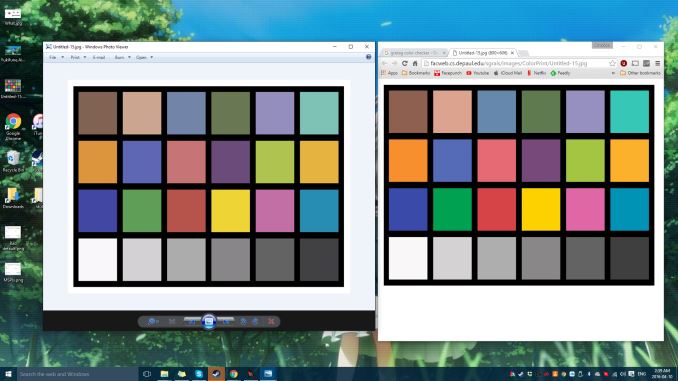 Probably the best example I can find of an application that is only somewhat color managed is Google Chrome. Web browsers in general have had a lot of problems with color management. Microsoft Edge, which is Microsoft's brand new browser, doesn't support it at all. Firefox requires configuration modifications to work with anything beyond tagged images. In the case of Chrome, there is support for displaying images with embedded ICC profiles. Unfortunately, this really doesn't go far enough to address all possible cases, and this is a recurring problem that I've found. While being able to properly display images that are tagged is a good thing, many programs will simply assume that an image was made for the target device's color space if they are not tagged at all. You can see the problems this causes in the image above, with an image grabbed right from the internet displaying incorrectly in Chrome because it has no embedded sRGB profile. In my experience this is often the case, as you usually need to use a program like Photoshop and explicitly include an ICC profile to have a tagged image.

In almost all cases, the assumption that content is designed with the target device's color characteristics in mind is an incorrect assumption to make, as all content made for the web targets the sRGB standard. Safari is, to my knowledge, the only major web browser that adopts this behavior and assumes that untagged images are sRGB. The same is true for the display of CSS colors. Although they are explicitly defined as being in the sRGB color space by the CSS color specification, with no profile information it's the job of the web browser to do the work there, and most simply don't bother. As a result, you don't see a website as the designer intended it to be, and the colors can be quite straining to look at in some cases. AnandTech itself is a good example, with some of the blue text being much more difficult to read when the saturation is ramped up, and the orange highlights becoming particularly gaudy looking.

In the end there's just too much unreliability on Windows within the operating system, Microsoft's own apps, and third party apps to simply rely on the color management system to make sure everything displays correctly. Windows is by far the most used operating system for consumer desktop computers and laptops, and Philips really should have included a proper sRGB mode on the 276E6 so users would be able to see most content properly, with Adobe RGB being available when working in applications that actually require and support it. While the core issue is something that Microsoft seriously needs to address, right now the solution is for monitor manufacturers to fill in the gaps, and companies that are entering this space using QD Vision's technology really need to make note of this.