The Surface Book can be had with up to 16 GB of memory, which should be plenty for most tasks that are done on an Ultrabook. Memory is dual-channel LPDDR3-1866 that is soldered into the top half of the unit. This should be plenty to handle virtualization of small workloads, and with the Surface Book coming with Windows 10 Pro, Hyper-V is an option.

We’ve already taken a look at what Skylake can bring to the tablet in terms of performance with the Surface Pro 4. Due to the improvements Microsoft made to cooling, as well as enhancements with Skylake, the Surface Pro 4 has throttling in check, and that carries through to the Surface Book as well. The initial Surface Book made available for review was the i5-6300U model, but then at the end of October, Microsoft was able to supply the i7-6600U with dGPU, 16 GB of memory, and 512 GB of storage as well, so we will be able to put the Surface Book through all of its paces across all of the different models.

For comparisons, I’ve sampled several similar devices for the graphs, and if anyone would like to compare the Surface Book against anything we’ve tested, please use the Bench link at the top of the page. At the launch of the Surface Book, Microsoft compared it to the 13-inch Retina MacBook Pro. On the CPU side, the 13-inch MacBook Pro uses 28-Watt processors, and they include Iris graphics (but no eDRAM – at least yet), so in terms of CPU performance the Surface Book is not going to be able to compete at the same level with only half of the TDP available. We have not had any of the recent MacBook Pro models in for review though, so we won’t be able to compare it directly. 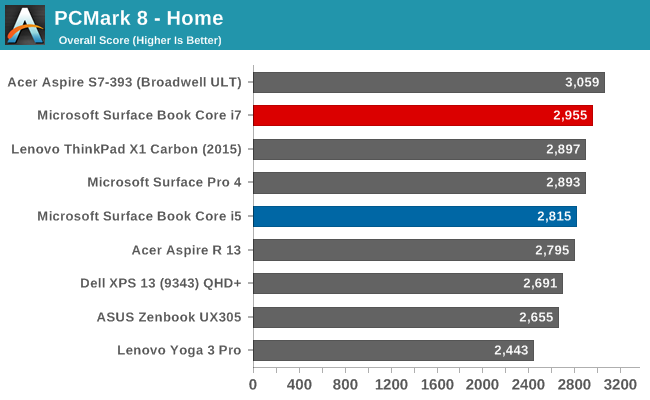 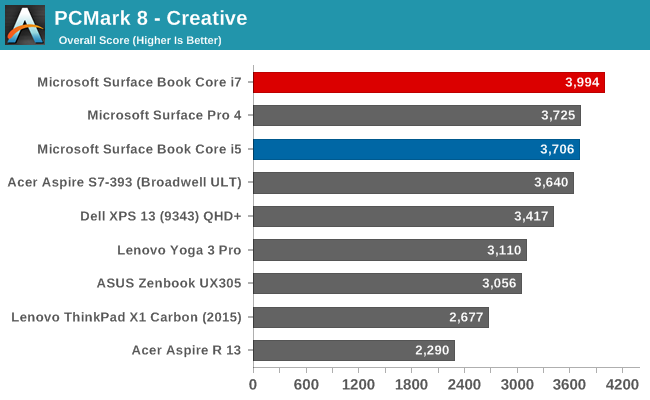 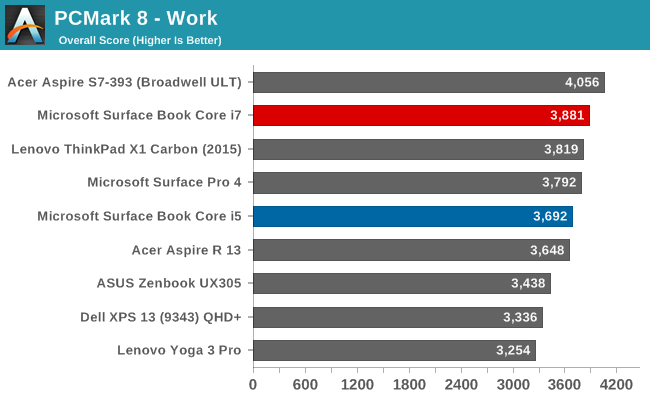 PCMark attempts to simulate real world workloads in several tests. Pretty much all factors of the device are tested, including storage, CPU, memory, and graphics. Skylake does pretty well in these tests, and while the Surface Book with Core i7 is not always the fastest, it is the fastest of any high resolution device. 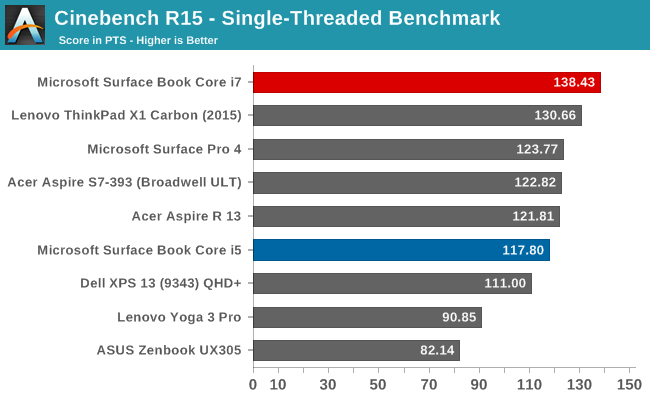 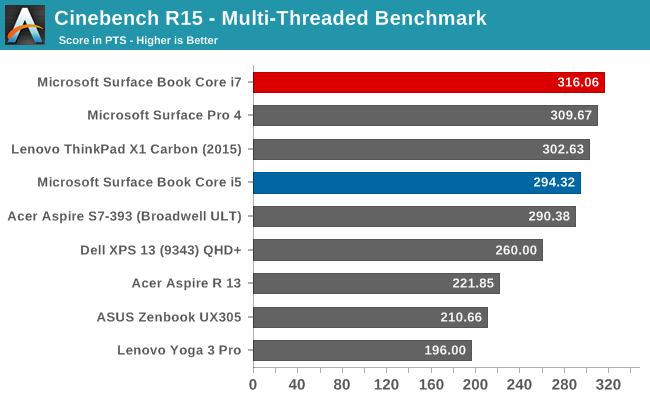 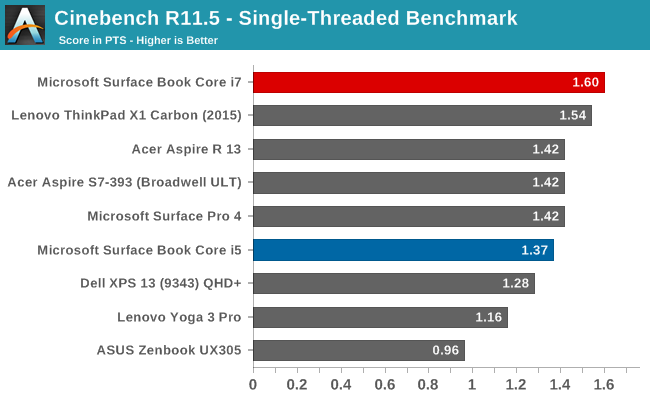 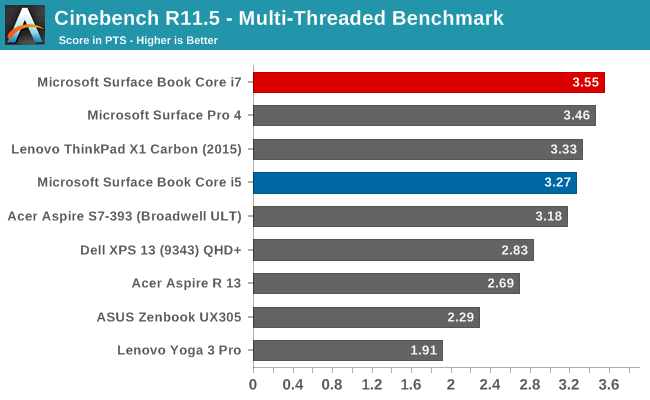 Cinebench performs rendering on the CPU, and more MHz and more cores can make a big difference on this test. Skylake does well here, especially on the multi-threaded workloads, but the i7-6600U shows a nice gain over the outgoing Broadwell Core i7 models. 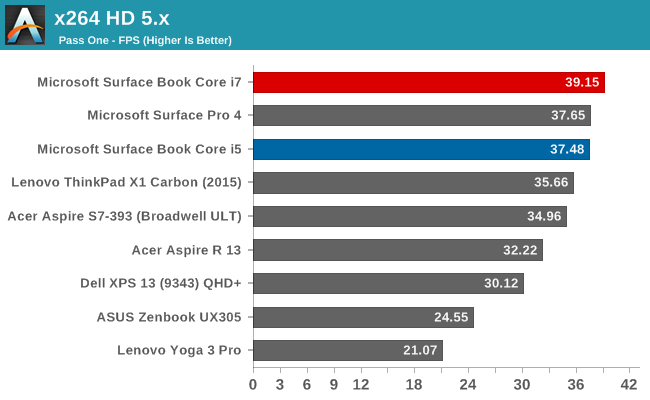 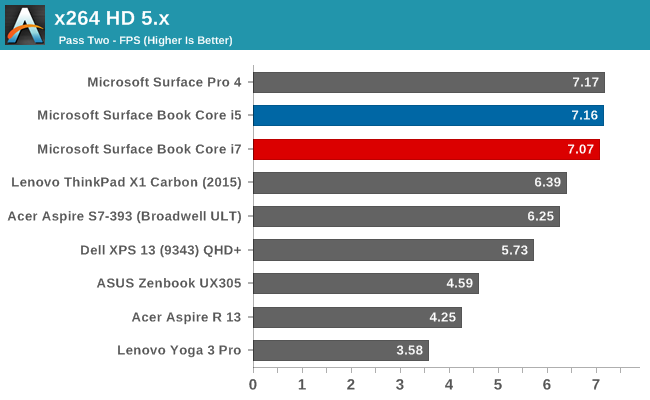 This test converts some video files, and much like Cinebench, it’s a mostly CPU bound test. Skylake does very well at this, but surprisingly the Core i7 model was slightly slower than the i5 on at the second pass.

Browsing the web is something all of us do, so performance here is important. In the end, we can test JavaScript performance, but this is a test of more than just the CPU, since much of the performance is derived from the browser’s scripting engine. Previous to Windows 10, we had used Google Chrome since IE 11 was not representative in terms of performance, but with Edge now available in Windows 10, we’ve moved to that browser. Some of the tests will show an increase over Chrome with Edge, and some will show a decrease, so I’ve labeled all of the graphs to show which browser was used.

In addition, Intel’s Speed Shift is not yet available in Windows 10, so the scores do not have this enabled except where indicated to show the difference in the upcoming build of Windows 10. Once the patch is confirmed to be out, I’ll update Bench with the new values. 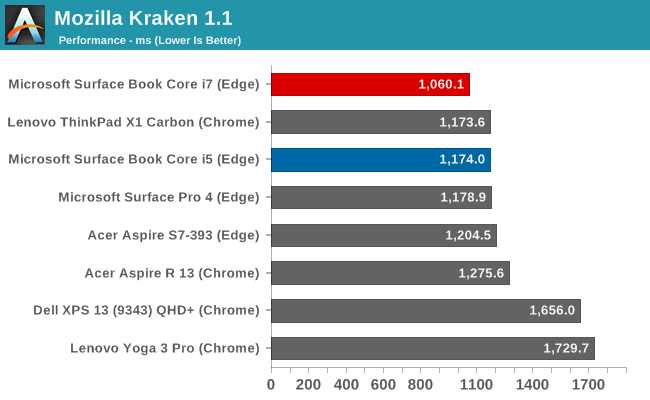 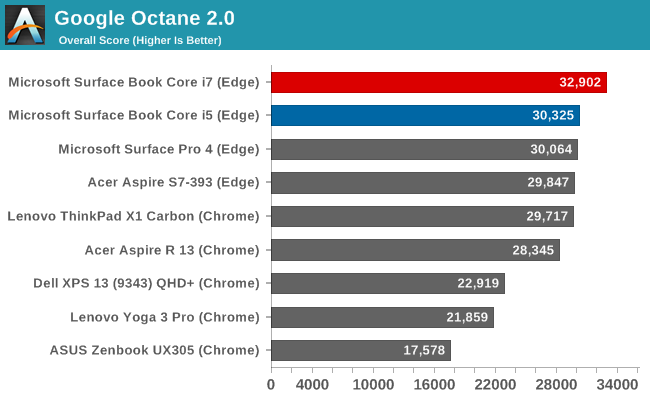 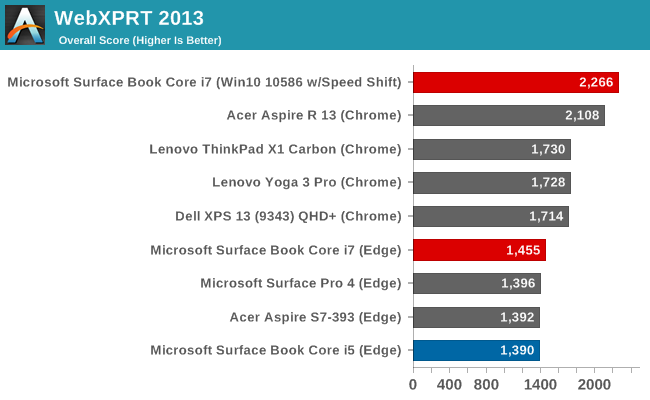 Like with the Surface Pro 4, performance on these tests is very good, with Skylake being able to outclass all of the previous generations of processors from Intel. We’ve already given you a preview of how this well change too when Speed Shift does get enabled on Windows 10, so expect these scores to go up a bit more too.

With the Surface Pro 4, and Surface Book, Microsoft has moved to the cutting edge of storage technology. All of the flash storage is now based on NVMe, and the use of PCI-E 3.0 gives the system significantly more bandwidth than SATA ever could. While this is not quite the jump a SSD was to a HDD, for SSDs, it’s a big jump in overall performance.

On the Surface Pro 4 we had a 256GB Toshiba XG3 NVMe drive, and it was somewhat hampered by the number of NAND dies available. With the Surface Book that was provided for review, it is the full 512 GB model, and the extra NAND dies make a huge difference, especially on the write speeds. We see a tripling of the sequential write speed, up to 1.5 GB/s, and pretty much all of the other write speeds are doubled. This is some seriously fast storage, and any work with large files is almost comically fast. 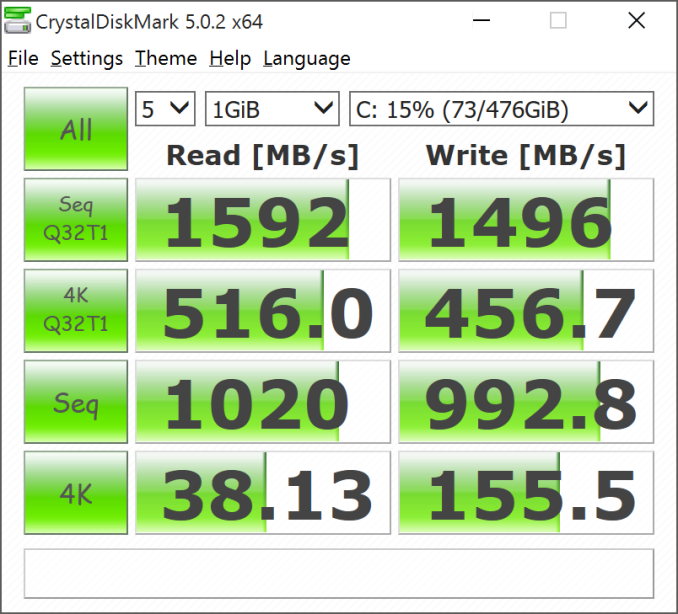 There is some bad news though. On notebooks, it is not uncommon to see components dual-sourced from multiple vendors. This can be for a number of reasons, and recently we have seen it in the iPhone 6s which sources it’s SoC from two vendors. Microsoft has gone down this road with the Surface Book, meaning there are going to be two versions of SSD available. The first is the very fast Toshiba that we’ve just seen, but the second is not quite what I would have expected in a high end device.

Microsoft has gone with the Samsung PM951, which is similar to the Samsung SM951 that we’ve reviewed in the past. It is still a PCIe 3.0 x4 NVMe drive, but there is one crucial difference between it and the SM951. The PM951 uses Triple-Level Cell (TLC) NAND rather than Multi-Level Cell in the SM951. TLC has some drawbacks, which are lower durability and slower write speeds. I’ll recommend reading our TLC primer to get into the technical reasons for this, but I have some concerns with TLC NAND being used in the Surface Book in particular, mostly because of its position in the marketplace. 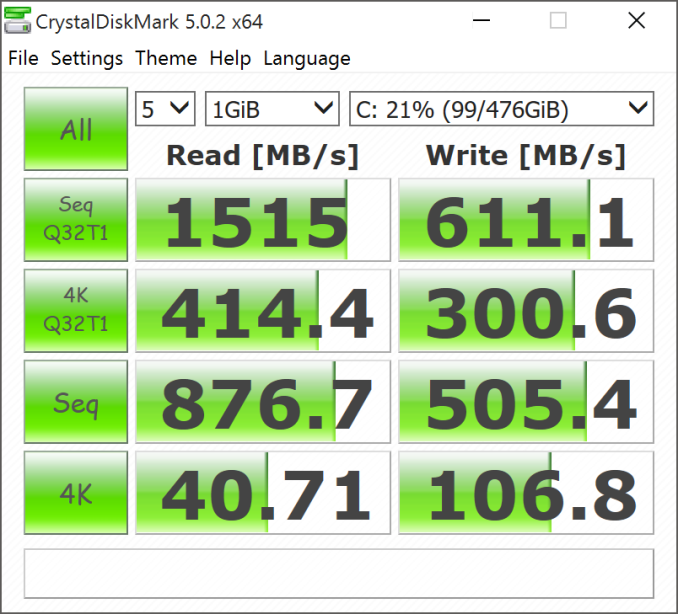 You can see that read speeds are still quite good, even surpassing the Toshiba some of the time, but write speeds are quite a bit lower. In particular, the sequential writes can be less than half the speed of the XG3 drive. This can be compensated for by using some SLC (Single-Level Cell) as a cache, but it does not appear that the PM951 has any caching available to it.

Also, these speeds are tested with the 512 GB drive, and lower capacity drives are going to have slower performance across the board due to the lack of parallelization of the NAND itself.

Let’s take a look at another test though. PCMark 8 uses traces from real-world applications to create their own storage test. 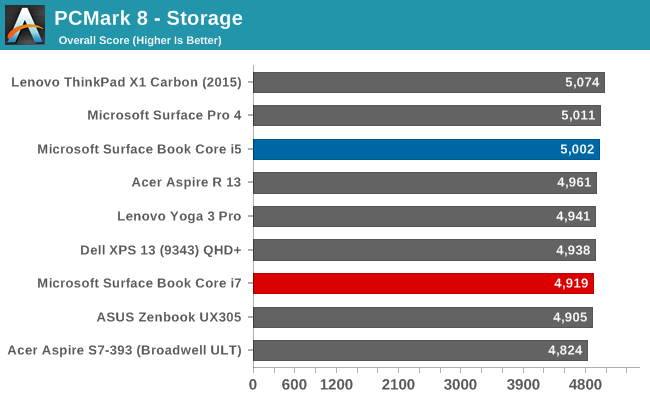 Summing the storage up, we have a situation that is not ideal. It’s fine to source from different vendors, but the performance differences between the two devices are quite substantial, let alone the long term durability of the TLC NAND. It was a decision done for the wrong reasons. It’s great that Microsoft has paid enough attention to storage to move to NVMe based drives, but then they have created a headache for themselves by sourcing drives with such different performance levels. If they had used the more expensive Samsung SM951, I don’t think there would be a discussion here. Many customers may not notice the speed differences, but that does not excuse the decision. Some customers will notice. On a premium device like the Surface Book, I would expect only the best, and while the drive may meet their internal performance levels, a cacheless TLC based SSD in a premium device is not necessary.