It is pretty interesting that Microsoft decided to offer a discrete GPU in the base of the Surface Book. This is pretty much the thinnest device out there with an NVIDIA GPU available, and although it is not a powerhouse like the GTX 970M, it can still offer a lot more performance than the integrated GPU available in Skylake. This is also helped by the discrete GPU being able to have its own power and cooling envelope, being that it is physically separated from the CPU. With the integrated GPU, it is competing within the same 15 Watt TDP envelope that is available to the CPU, so when gaming you always see the CPU move lower in frequency to accommodate. With a separate GPU, this isn’t necessary, and both can run at their full capabilities.

The actual GPU is described by Microsoft to be a custom Maxwell processor, but looking at GPU-Z on the Surface Book pretty clearly shows it to be about equivalent to the GT 940M. The custom part that Microsoft has gone with is clocked slightly lower than the official GT 940M and comes with 1 GB of GDDR5 memory rather than the typical 2 GB of DDR3 that comes with that part. The extra bandwidth should help out quite a bit, especially since this GPU is limited by a 64-bit memory bus. The lack of VRAM means you are going to struggle gaming at high resolutions, but then again the lack of compute power in the GPU also means the same thing. When gaming, the extra GPU power along with the CPU not needing to reduce its power output, should lead to much better performance when compared to using an integrated solution. 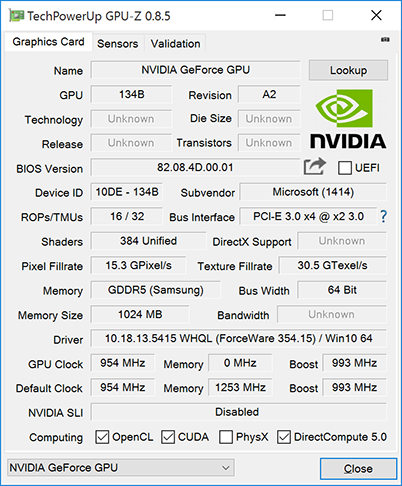 Microsoft is leveraging NVIDIA’s Optimus technology to determine when the GPU is turned on. This means there is a whitelist of applications which are enabled by default, and you can go into the NVIDIA control panel and set up your own applications to use either the integrated GPU or the NVIDIA GPU. Unlike most gaming laptops with Optimus though, Microsoft has not installed the GeForce Experience software, so in order to access the settings you have to either search for NVIDIA in the start menu, or open the legacy control panel. I think Microsoft is going for the automatic route that is likely good for most situations. The other missing piece though of the GeForce software is that it will automatically configure game settings for optimal frame rates, which is a great feature. Since the GT 940M is a pretty low end part - and as such requires some effort to dial in the most balanced settings - it would have been nice to have this.

In order to judge performance levels, the Surface Book i5 (with no dGPU) and the Surface Book i7 (with dGPU) have been put through our standard notebook workload. Since these are not gaming systems, they have not been tested on all of the games that a more powerful system would, but I’ve run a couple more than a typical Ultrabook would do just to see how the NVIDIA GPU fares. The Dell XPS 15 9530 is a quad-core Haswell notebook wth GT 750M, and is included as a comparison for a device with a lower end discrete GPU. 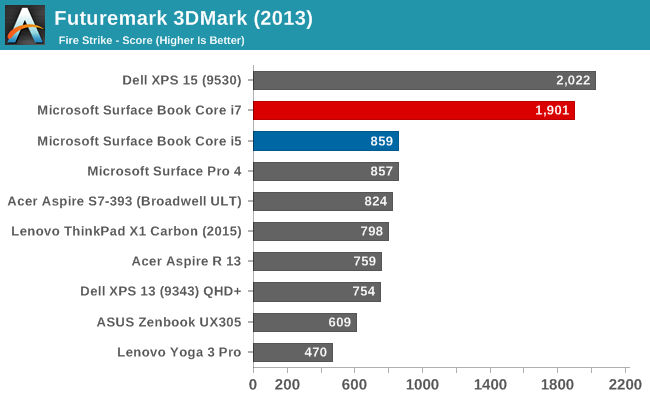 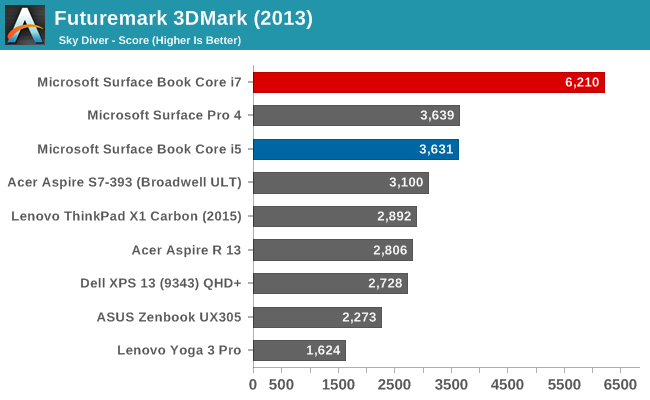 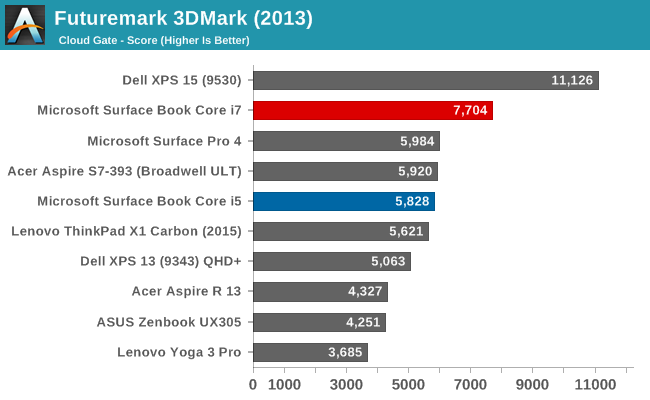 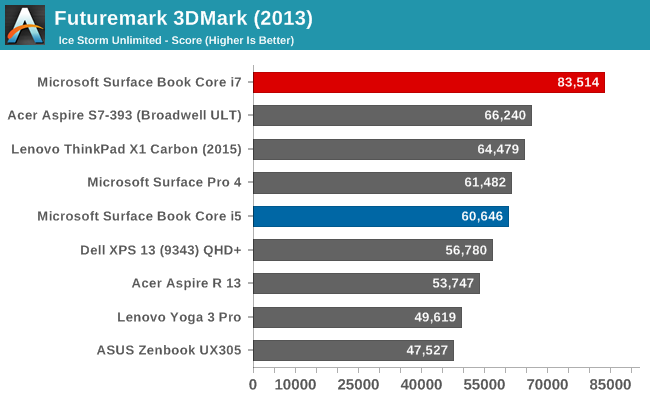 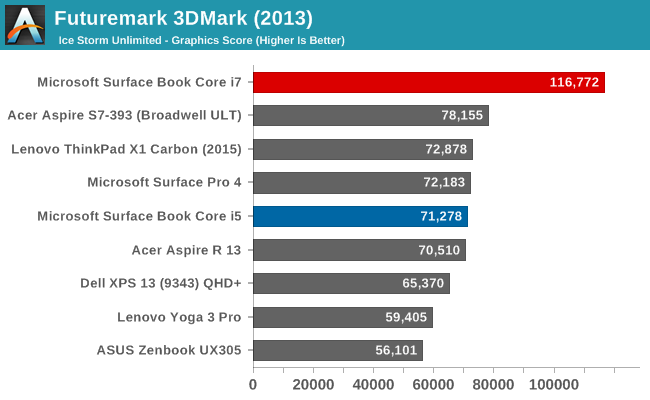 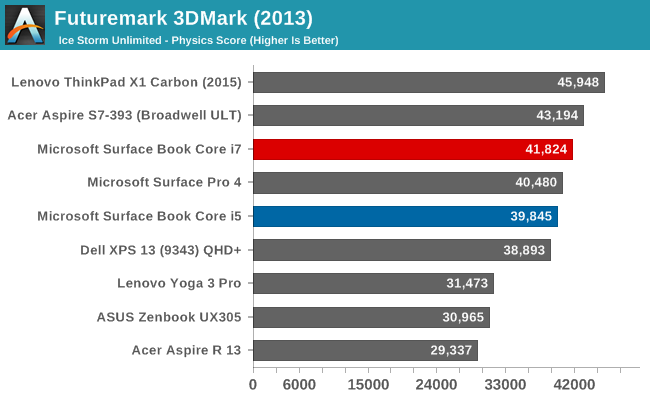 Futuremark’s 3DMark has several testing options for Windows PCs, with Fire Strike being the most demanding. On this test, the Core i7 model scored an impressive 121% higher than the Core i5 with just integrated graphics. But as the tests get easier, the gap between the two models shrinks. With Sky Diver, the Core i7 is still 71% faster, which shrinks again to 32% for Cloud Gate, and 37% for the easiest test, Ice Storm Unlimited. As the tests get easier, the CPU becomes a bigger factor and brings the scores closer together. 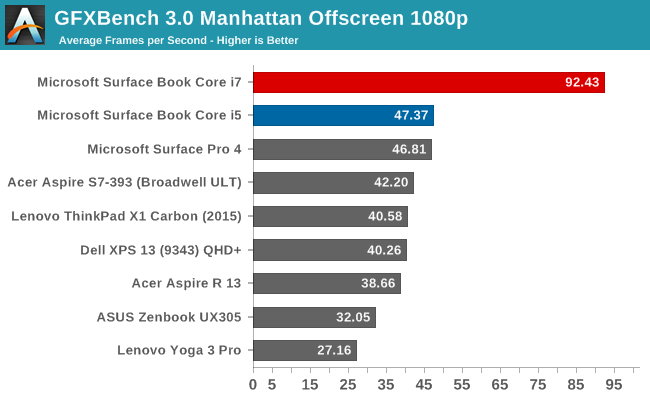 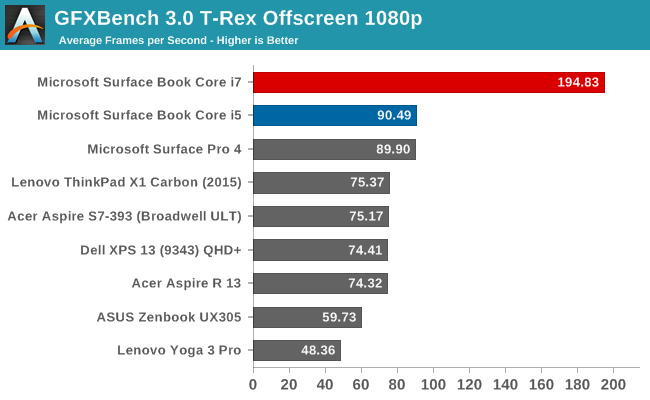 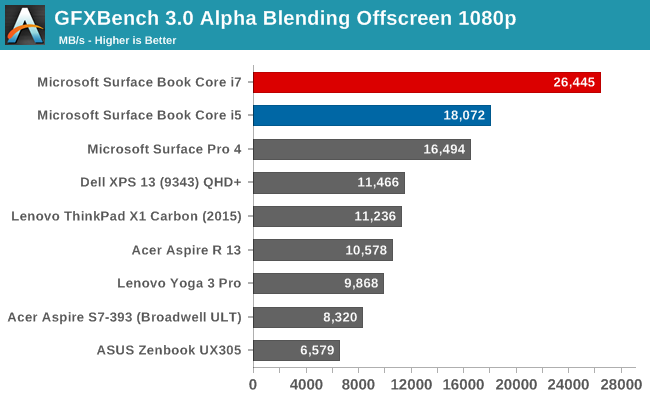 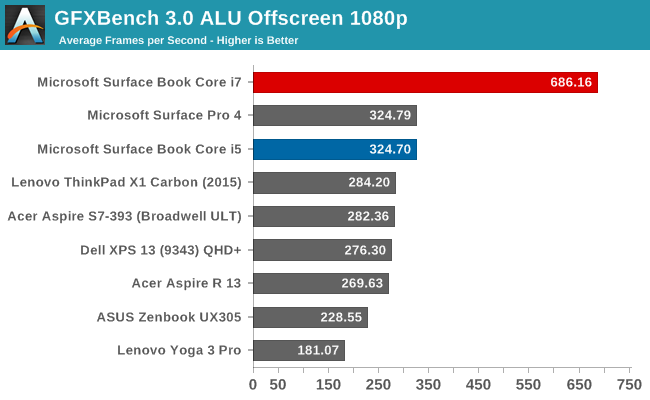 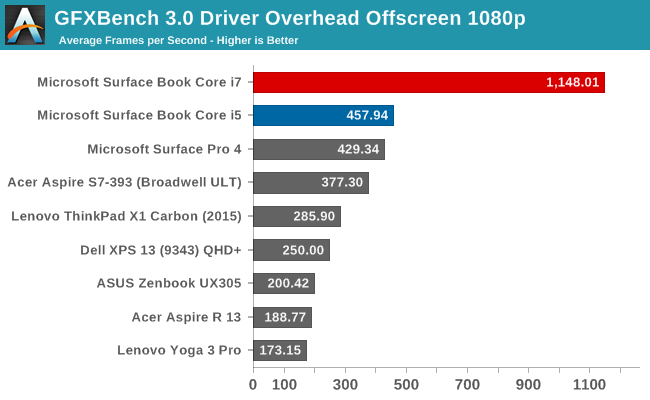 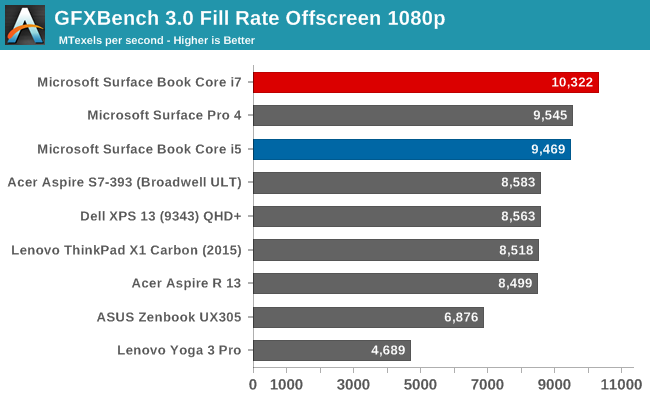 Our second and final set of synthetic tests are done with the DirectX version of GFXBench. Once again, the NVIDIA GPU provides a big jump in performance, pretty much doubling the scores of the Core i5 model with Intel HD 520 graphics. This isn’t surprising of course, since the NVIDIA GPU has more TDP available than the entire Skylake CPU has. It would be interesting to see the GT 940M with DDR3 compare to the Surface Book, assuming a similar CPU was available.

I’ve already spoiled these results a bit by including them in the Surface Book first look article, but much like the 3DMark scores, as the settings are turned down, the iGPU and dGPU solutions get much closer. At our maximum settings on this benchmark, which is 1920x1080 with all graphical options enabled, the Core i7 Surface Book is an impressive 91% faster. It is still not ridiculous frame rates, but the game is certainly very playable, stopping just short of 60fps. Our test scene for Dota 2 is also a very demanding part of the game, so I would not expect averages to dip much below this.

While I am anxiously awaiting the sequel to this amazing game, we can still use the original Tomb Raider benchmark. At its maximum settings, with TressFX enabled, it can be very demanding on a GPU. None of the integrated GPUs would be able to run this game at that kind of setting, and even the Surface Book Core i7 only gets 15.3 frames per second at our Enthusiast levels, so for this comparison I’ll focus on our value settings. At our lowest settings for this game, the integrated solution would be just playable, at around 40 frames per second. Since this is not a high paced shooter, 40 frames per second would get you by, but the Core i7 model bumps that up almost 100% to just over 80 frames per second. With this much performance available, you could even jump to our medium settings, which gave a result of 44.3 frames per second and would give a much better look to the game.

Much like Tomb Raider, this game is getting a bit long in the tooth, which actually makes it a good candidate for integrated graphics. But even on our value settings for this game, the Core i5 Surface Book did not quite hit 30 frames per second, where as the dGPU model was almost at 60.

I always like to take a look at temperatures and processor frequencies while the system is under load for an extended amount of time. It’s great that it can finish a benchmark in a couple of minutes, but rarely do people use a system for just a couple of minutes. The NVIDIA GPU in the base is of particular concern, since generally Ultrabooks only deal with about 15 Watts of heat, and the GPU can draw more than that. To test this out, I’ve run the Surface Book through an entire session of our Dota 2 benchmark, while logging data. 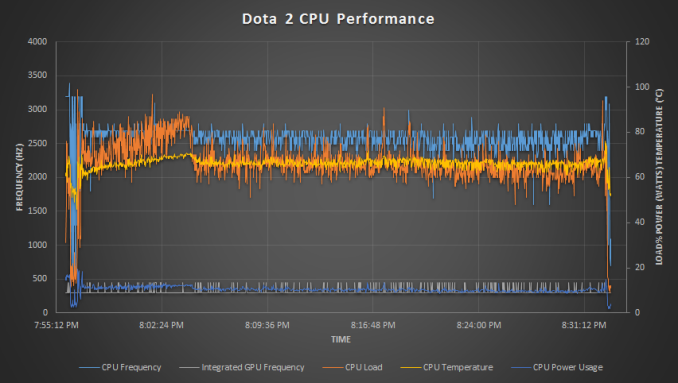 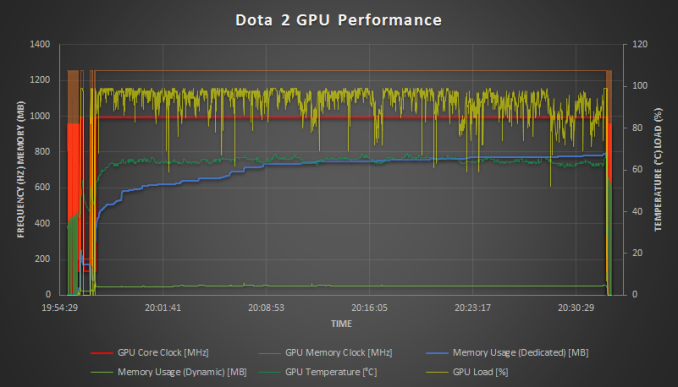 There are a couple of interesting things to note here. First, the GPU frequency locks in at 992.7 MHz as soon as the game is launched, and it does not budge at all for the duration of the gaming session. There is absolutely no thermal or power throttling happening. Looking at the temperature graph for the GPU, the temperature is not ramping up at all, so I would be confident saying that it would continue this speed for as long as necessary. The GPU load is also not pegged at 100% all of the time, indicating that the GPU is at least partially held back by the CPU. Since the CPU is in a different thermal zone altogether, it is not throttling either, but it’s struggling to keep up with the demands of the GPU. Looking back at our results, we can actually see that the system is CPU bound by looking at the Dota 2 framerates from Mainstream and Enthusiast settings, which are roughly identical, indicating that we are running into a CPU bottleneck.

I suppose I should mention that the Surface Book is not a gaming system. If you want to play the latest games, with high resolution and lots of options enabled, neither the integrated graphics version, nor the discrete graphics option, are really the answer here. But if you are someone who just plays lighter games like League of Legends or Dota 2, the NVIDIA powered Surface Book is easily the most powerful notebook that is this size. With roughly double the performance of the integrated graphics, the Surface Book Core i7 goes from unplayable, to playable, which, for some, is what they want. If you are a gamer though, there are better options for less money, but they will bring their own compromises as well, such as being thicker, heavier, and have less substantial battery life.