Brian did some excellent sleuthing and came across battery capacities for both the iPhone 5s and 5c in Apple’s FCC disclosures. The iPhone 5 had a 3.8V 5.45Wh battery, while the 5s boosts total capacity to 5.96Wh (an increase of 9.35%). The move to a 28nm process doesn’t come with all of the benefits of a full node shrink, and it’s likely not enough to completely offset the higher potential power draw of a much beefier SoC. Apple claims the same or better battery life on the 5s compared to the iPhone 5, in practice the answer is a bit more complicated.

The iPhone 5s improves power consumption by going to 28nm, but turns that savings into increased performance. The SoC also delivers a wider dynamic range of performance than we’ve ever seen from an Apple device. There’s as much CPU power here as the first 11-inch MacBook Air, and more GPU power than an iPad 4.

To find out the balance of power savings vs. additional performance I turned to our current battery life test suite, which we first introduced with the iPhone 5 review last year.

We'll start with our WiFi battery life test. As always, we regularly load web pages at a fixed interval until the battery dies (all displays are calibrated to 200 nits). 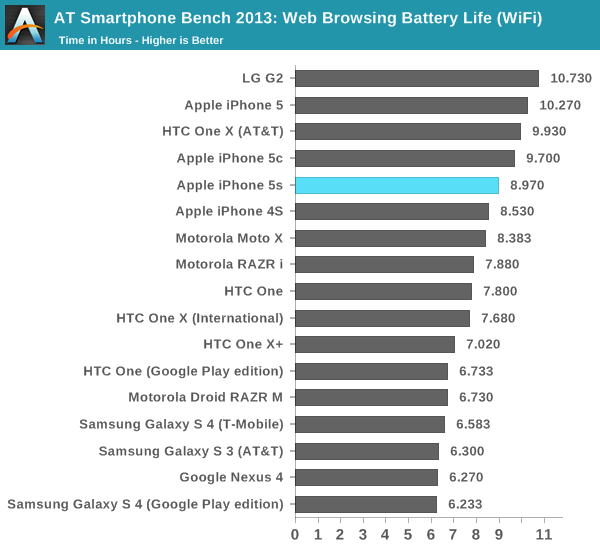 The iPhone 5s regresses a bit compared to the 5 in this test (~12% reduction despite the larger battery). We're loading web pages very aggressively here, likely keeping the A7 cores running at their most power hungry state. Even the 5c sees a bit of a regression compared to the 5, which makes me wonder if we're seeing some of the effects of an early iOS 7 release here.

The story on LTE is a bit different. Here we see a slight improvement in battery life compared to the iPhone 5, although the larger battery of the 5s doesn't seem to give it anything other than parity with the 5c: 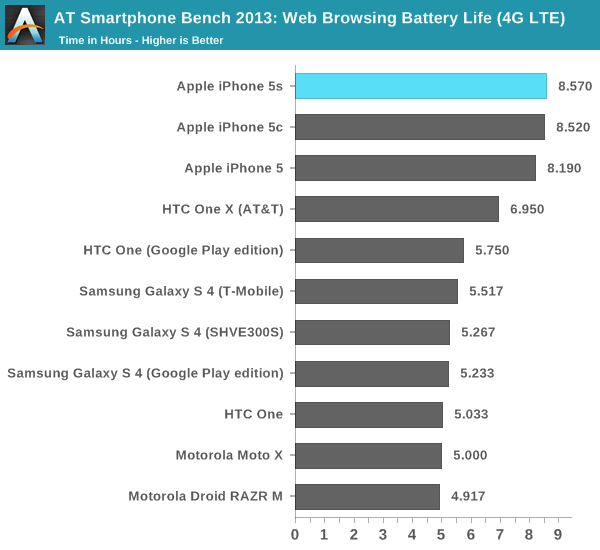 Our cellular talk time test is almost entirely display and SoC independent, turning it mostly into a battery capacity test: 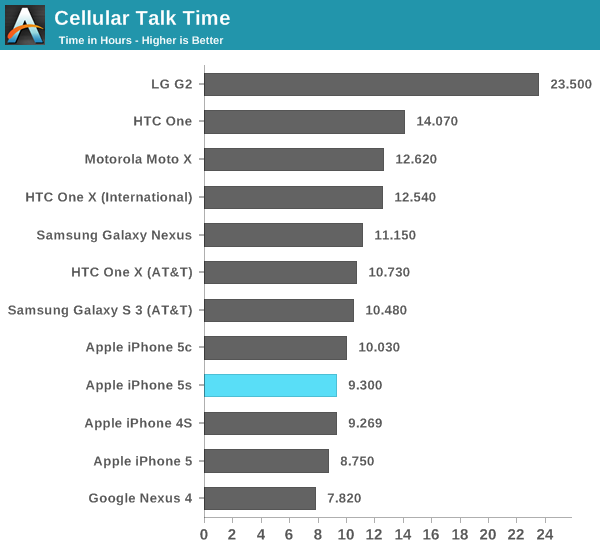 You can see the close grouping of the smaller iPhones at the bottom of the chart. There's a definite improvement in call time compared to the iPhone 5. We're finally up above iPhone 4S levels there. 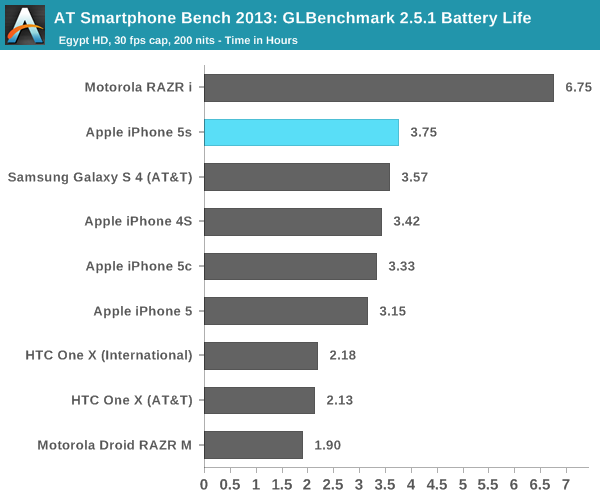 Our Egypt HD based 3D battery life test gives us the first indication that Rogue, at least running fairly light code, can be more power efficient than the outgoing 5XT. Obviously the G6430 implemented here can run at fairly high performance levels, so I'm fully expecting peak power consumption to be worse but for more normal workloads there's no regression at all - a very good sign.