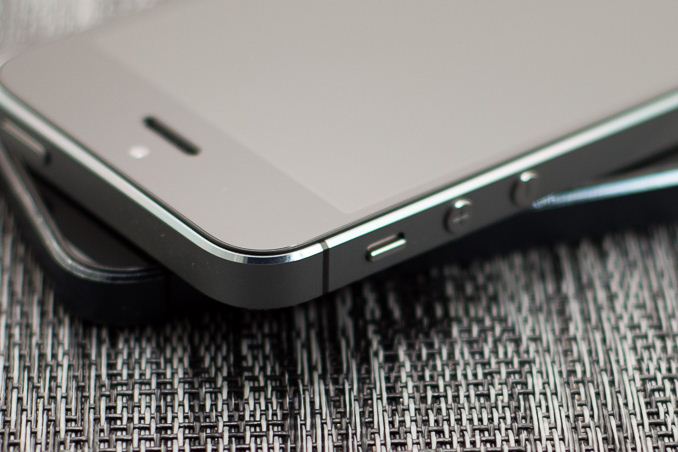 For much of the iPhone's life Apple has enjoyed a first-mover advantage. At the launch of the first iPhone, Steve Jobs expected the device and OS would give it a multi-year head start over the competition. Indeed that's how the market played out. Although Android was met with some early success, it wasn't until well after the launch of the first Android devices that we started seeing broad, mainstream acceptance of the platform. The iPhone bought Apple time, and together with the iPad it brought Apple a tremendous amount of profit over the years. The trick of course is turning a first-mover advantage into an indefinitely dominant market position, a difficult task when you're only making one device a year.

Today we find Apple in a very different position. The iPhone is still loved by a very loyal customer base, but the competition is much stronger than it was back in 2007. The modern smartphone market has also evolved. When Apple introduced the original iPhone with its 3.5" display, Steve called it "giant" on stage. Today even HTC's One mini ships with a 4.3" display.

Last year we saw Apple begin to address the changing landscape with the iPhone 5. The 5 saw Apple moving to a thinner, lighter chassis with much better internals and a significantly larger display. While there is market demand for Apple to do the same again, and move to an even larger display, there are some traditions Apple is sticking to. In this case, it's the tradition of the S-update.

The iPhone 5s continues Apple’s tradition of introducing a performance focused upgrade for the last year of any new chassis design. The first time we encountered an S-update was with the 3GS, which took the iPhone away from its sluggish ARM11 roots and into the world of the Cortex A8.

The next S-upgrade came with the iPhone 4S: Apple’s first smartphone to use a dual-core SoC. At the time I remember debate over whether or not a performance upgrade alone was enough to sell a new device, especially one that didn’t look any different. I’m pretty much never happy with the performance I have, so I eagerly welcomed the new platform. Looking back at the iPhone 4 vs. 4S today, I’d say the investment was probably worth it. In preparation for this review I threw iOS 7 on every iPhone that would support it, dating back to the iPhone 4. In my experience, the 4 is a bit too slow running iOS 7 - the 4S really should be the minimum requirement from a performance standpoint.

That brings us to the iPhone 5s, the third in a list of S-upgrades to the iPhone platform. Like the S-devices that came before it, the iPhone 5s is left in the unfortunate position of not being able to significantly differentiate itself visually from its predecessor. This time around Apple has tried to make things a bit better by offering the 5s in new finishes. While the iPhone 5 launched in silver and black options, the 5s retains silver, replaces black with a new space grey and adds a third, gold finish. 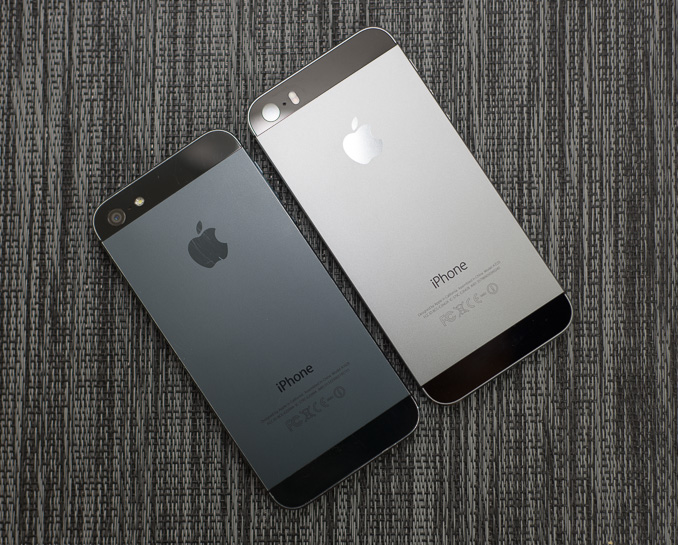 I was sampled a space grey iPhone 5s, which worked out well given my iPhone 5 was black. The new space grey finish is lighter in color (truly a grey rather than a black) and has more prominently colored chamfers. The move to a lighter color is likely to not only offer a little bit of visual differentiation, but also to minimize the appearance of scuffs/scratches on the device. My black iPhone 5 held up reasonably well considering I carry it without a case, but there’s no denying the fact that it looks aged. Interestingly enough, I never really got any scratches on the back of my 5 - it’s the chamfers that took the biggest beating. I have a feeling the new space grey finish will hold up a lot better in that regard as well. 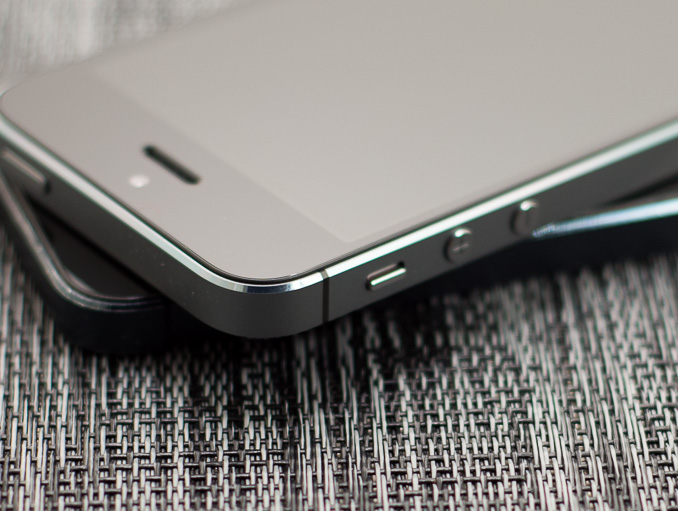 The addition of a gold option is an interesting choice. Brian and I saw the gold iPhone up close at Apple’s Town Hall event and it really doesn’t look bad at all. It’s a very subtle gold finish rather than a gaudy gold brick effect. I think gold is likely the phone I’d opt for simply because it’d be very different than everything else I have, but otherwise space grey is probably the best looking of the three devices to me. 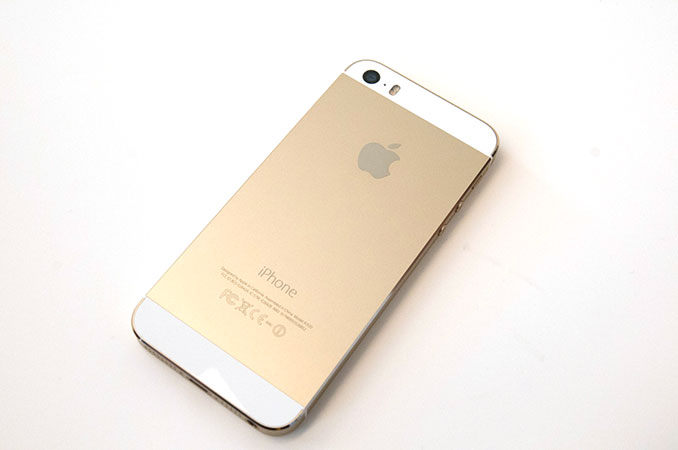 Along with the new finishes come new leather cases to protect the 5s. These cases are designed and sold by Apple, and they are backwards compatible with the iPhone 5 as well. Apple calls them leather cases but I'm not entirely sure if we're talking about real leather here or something synthetic. Either way, the new cases feel great. They've got a very smooth, soft texture to them, and are lined with a suede like material. 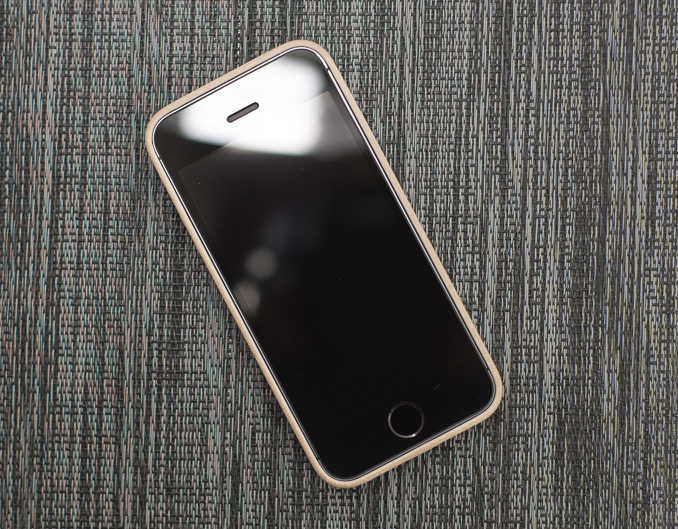 The new cases don't add a tremendous amount of bulk to the device either. The cases are available in 5 different colors and retail for $39: 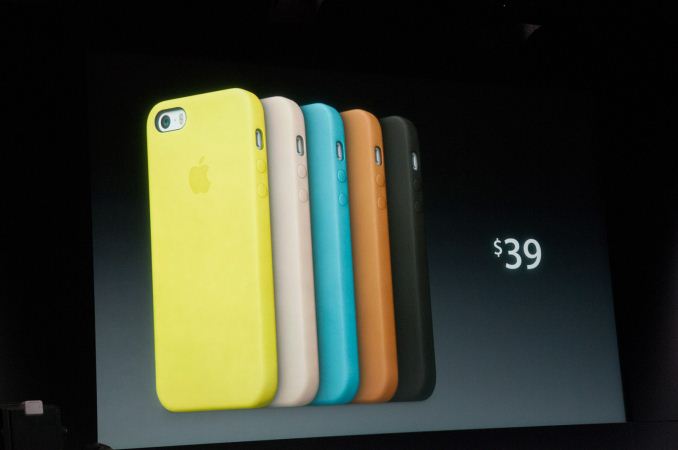 I was sampled a beige case and have been using it non-stop for the past week. I really like the case a lot and it did a great job protecting the 5s over the past week while I was traveling. I took all of the photos of the review device after I returned home from traveling, but thanks to the case the device still looked as good as new. If you're considering one of these cases you might want to opt for a darker color as the edges of my case started to wear from constantly pulling the phone out of my pockets: 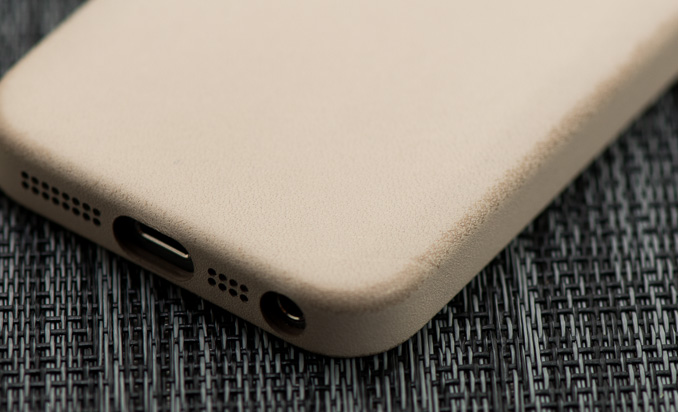 If you're fine with the distressed leather look then it's not a concern, but if you're hoping to keep your case pristine you may want to look at other cases. If you want a more affordable & more rugged option, Brian turned me on to the Magpul Field case which should work perfectly with the iPhone 5s.

Since the 5s is an S-upgrade, the chassis remains unchanged compared to the iPhone 5. The 5s’ dimensions are identical to that of the iPhone 5, down to the last millimeter of size and gram of weight. Construction, build quality and in-hand feel continue to be excellent for the iPhone 5s. Despite the diet the iPhone went on last year, the 5/5s chassis is still substantial enough to feel like a quality product. I remember criticisms of the iPhone 5 at launch, saying that it felt too light. Now going back and holding an iPhone 4S, it feels like the very opposite is true - the 4S was too heavy 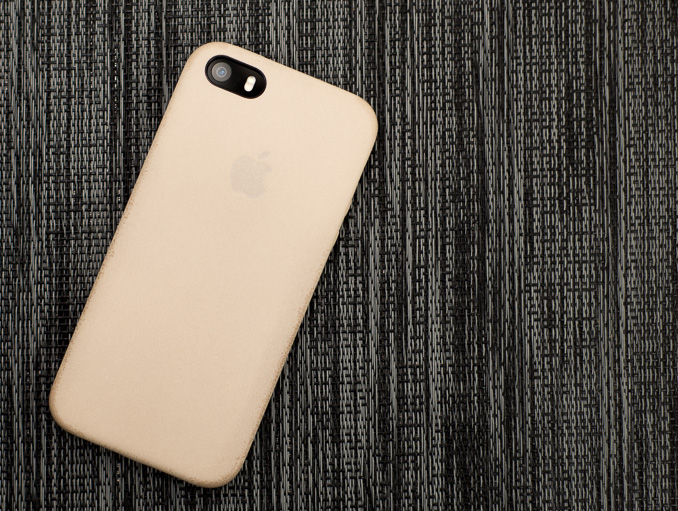 The iPhone 5s design remains one of the most compact flagship smartphones available. The move to a 4-inch display last year was very necessary, but some will undoubtedly be disappointed by the lack of any further progress on the screen dimension front. A larger display obviously wasn’t in the cards this generation, but I have a strong suspicion Apple has already reconsidered its position on building an even larger iPhone. Part of the problem is the iPhone’s usable display area is very much governed by the physical home button and large earpiece/camera area at the top of the device. Building a larger iPhone that isn’t unwieldy likely requires revisiting both of these design decisions. It’s just too tall of an order for a refresh on the same chassis.

Brian often talks about smartphone size very much being a personal preference, and for many the iPhone 5 continues to be a good target. If you fall into that category, the 5s obviously won’t disappoint. Personally, I would’ve appreciated something a bit larger that made better use of the front facing real estate. The 5s’ width is almost perfect for my hands. I could deal with the device being a little larger, with the ideal size for me landing somewhere between the iPhone 5 and the Moto X.

It remains to be seen the impact display size has on iPhone sales. Anecdotally I know a number of die hard iPhone users who simply want a larger display and are willing to consider Android as a result. I still believe that users don’t really cross shop between Android and iOS, but if Apple doesn’t offer a larger display option soon then I believe it will lose some users not because of cross shopping, but out of frustration.

As a refreshed design, the iPhone 5s carries over all of the innovations we saw in the 5 last year. The iPhone 5s features the same Lightning connector that debuted on the iPhone 5, and has since been extended to the iPad lineup as well as the new iPods.

As with all other S-upgrades, the biggest changes to the iPhone 5s are beneath the aluminum and glass exterior. The 5s’ flagship feature? Apple’s new A7 SoC. The A7 is the world's first 64-bit smartphone SoC, and the first 64-bit mobile SoC shipping in a product (Intel’s Bay Trail is 64-bit but it won’t ship as such, and has yet to ship regardless). In addition to the new 64-bit SoC Apple upgraded both cameras in the iPhone 5s and added a brand new fingerprint sensor called Touch ID. Of course the iPhone 5s is one of the first new iPhones to ship with iOS 7 from the factory.

The iPhone 5s also breaks with tradition in a couple of ways. The 5s is the first iPhone in recent history to not be offered up for pre-order. Apple expects demand for the iPhone 5s to severely outstrip supply, and as a result won't be accepting pre-orders on the 5s.

The other big change is what happens to the previous generation iPhone. In the past, Apple would discount the previous generation iPhone by $100 on-contract and continue to sell those devices at low capacity points. A two-generation old iPhone was often offered for free on-contract as well. This time, the iPhone 5s replaces the iPhone 5 at the high end, but the iPhone 5 ceases production. Instead, the 5 is replaced with a cost reduced version (the iPhone 5c). As the glass & aluminum iPhone 5/5s chassis likely doesn't scale well in price, coming up with a new polycarbonate design for slightly lower price points makes sense. I have written a separate piece on the iPhone 5c as I have more than enough to talk about with the iPhone 5s in this review.