Adding to its gaming range, the MSI MAG series is designed to offer a lower entry point for users to aim for which look to benefit from Z490 features including overclocking, but at a lower cost to the end-user. The MSI MAG Z490 Tomahawk includes two full-length PCIe 3.0 slots, two PCIe 3.0 x4 M.2 slots, and six SATA ports Also featured is dual Ethernet with a 2.5 G and Gigabit pair of controllers, but drops Wi-Fi 6 support as featured on the MPG Z490 series. 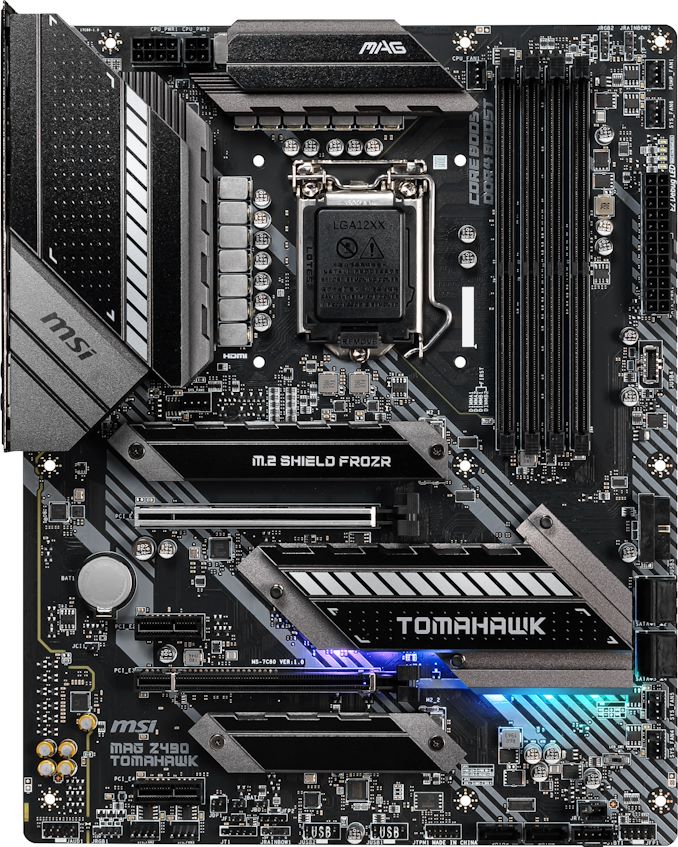 Dropping the red and black color scheme seen from previous Tomahawk models, the MSI MAG Z490 Tomahawk has opted for a more subtle black and grey theme throughout including the heatsinks, and PCB. It consists of some integrated RGB LEDs underneath the chipset heatsink, with Tomahawk branding and straight diagonal lines across the PCB amalgamating into the design of the heatsinks. It uses an 8-pin and 4-pin 12 V ATX power input pairing for CPU power, with a 24-pin motherboard 12 V ATX power input to power the motherboard. Both of the two PCIe 3.0 x4 M.2 slots include its heatsink, with six SATA ports with support for RAID 0, 1, 5, and 10 arrays. The board does have two full-length PCIe 3.0 slots which run at x16+4, with an additional two PCIe 3.0 x1 slots.

On the rear panel is one USB 3.2 G2 20 Gbps Type-C, one USB 3.2 G2 10 Gbps Type-A, four USB 3.2 G1 Type-A, and two USB 2.0 ports. Featured is a pair of Ethernet ports, one controlled by a Realtek RTL8125B 2.5 G, and the other by an Intel I219-V Gigabit controller. For users using onboard graphics, there's an HDMI and DisplayPort video output. In contrast, the five 3.5 mm audio jacks and S/PDIF optical output are controlled by a Realtek ALC1220 HD audio codec. Finishing off the rear panel is a single PS/2 keyboard and mouse port.

Despite the MSI MAG series targeting the lower-end of the Z490 gaming market, it does include a 2.5 G Ethernet controller which does bump the pricing up a little. The MSI MAG Z490 Tomahawk hasn't been given a price yet, but is plenty enough for users looking to build a single NVIDIA based graphical powerhouse, or even opt for two-way AMD Crossfire support, on supported Radeon models.