Similar in many ways including features and design to the MPG Z490 Gaming Edge WIFI, MSI has also released a Micro-ATX version, the MSI MPG Z490M Gaming Edge WIFI. Changing it up a little, MSI has included two full-length PCIe 3.0 slots with support for two-way NVIDIA SLI and AMD CrossFire, with a 2.5 G Ethernet port, Intel Wi-Fi 6 and BT 5.1 support, with two PCIe 3.0 x4 M.2 slots, but all on a smaller PCB. 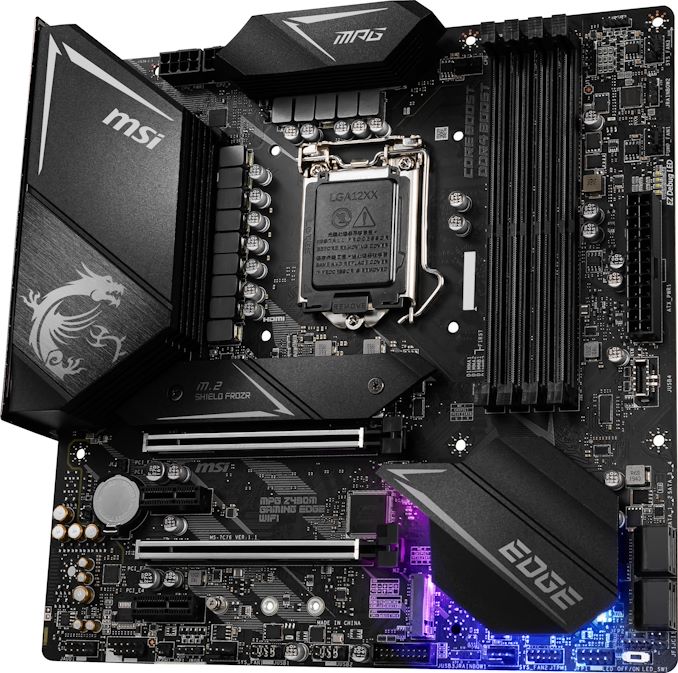 The Z490 and Z490M Gaming Edge WIFI share the same black and grey design, with primarily black heatsinks on a black and grey accented PCB. A large MSI Dragon logo is present on the rear panel cover, with a set of RGB LEDs integrated into the chipset heatsink which can be customized via the MSI Mystic Light RGB software. There are two full-length PCIe 3.0 slots which operate at x16, and x8/x8, with two further PCIe 3.0 x1 slots. Similar to the ATX version, the Z490M Gaming Edge WIFI has two PCIe 3.0 x4 M.2 slots, with the top slot accompanied with a heatsink. The board also has four SATA ports with RAID 0, 1, 5, and 10 arrays supported. Also present is four memory slots with support for DDR4-4800, with a total capacity of 128 GB.

On the rear panel is single Ethernet port powered by a Realtek RTL8125B 2.5 G controller, with antenna connectors for the Intel AX201 Wi-Fi 6 wireless interface, which also adds BT 5.1 support. For USB there is a single USB 3.2 G2 20 Gbps Type-C, one USB 3.2 G2 10 Gbps Type-A, two USB 3.2 G1 Type-A, and two USB 2.0 ports. The five 3.5 mm and S/PDIF optical output are controlled by a Realtek ALC1220 HD audio codec, and there are a DisplayPort and HDMI video output pairing for onboard graphics users. Finishing off the rear panel is a single PS/2 keyboard and mouse combo port.

The MSI MPG Z490M Gaming Edge WIFI pricing hasn't been announced as of yet, but it does represent a very small select group of micro-ATX Z490 models at launch. It has better full-length PCIe 3.0 support than its bigger ATX sized sibling but has fewer SATA ports as a result. It does, however, have two PCIe 3.0 x4 M.2 slots, keeps a good networking combination of a 2.5 G and Wi-Fi 6 and has a nifty EZ LED control button to turn off RGB which can enable or disable RGB lighting with a simple press.