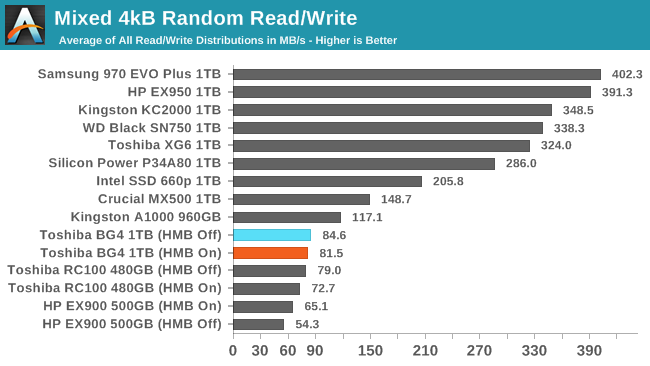 This mixed random IO test covers a fairly wide span of the drive, so it's not a surprise to see that the Toshiba/Kioxia BG4 and other DRAMless SSDs end up being among the slowest drives overall, with HMB providing little or no help.

The power consumption of the BG4 during this test is as low as any other drive, but the limited performance means its efficiency score is still clearly worse than most of the drives that have their own DRAM.

The performance of the BG4 is low and relatively flat across this test, declining slightly as the workload gets more write-heavy when most drives gain performance. With a working set small enough for the BG4's HMB configuration to be useful, we would likely see a very different performance profile. 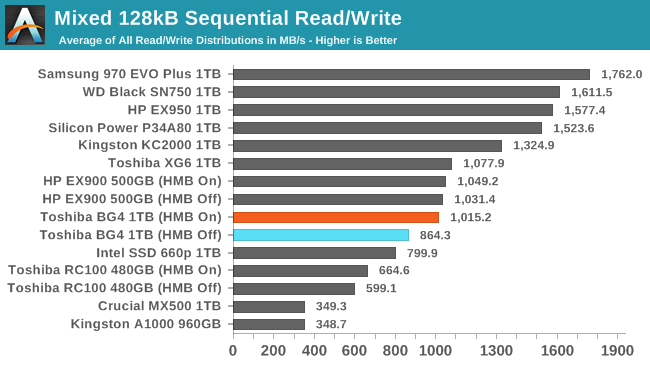 The BG4 is a bit more competitive on the mixed sequential IO test, almost matching the XG6's overall performance and more or less tied for fastest among the entry-level NVMe drives.

The BG4 comes out on top of the power efficiency rankings, with the WD Black SN750 a close second. Even with the lower performance of running without HMB, the BG4 stays near the top of the efficiency chart.

Without HMB, the BG4's performance across the mixed sequential IO test is mostly flat, with a bit of an overall decline as the workload becomes more write-heavy. Enabling HMB allows the BG4 to pick up some speed during the last third of the test, but it doesn't have a huge impact.