The OnePlus 2 had many problems, but something you could generally count on was that it provided good battery life. Unfortunately, the caveat was that the phone usually ran on four Cortex A53 cores so it performed only a bit better at CPU tasks than a $100 Moto E LTE, but that's another story. With the OnePlus 3 you no longer have to deal with exceptionally poor performance, and with the battery being made smaller at the same time as OnePlus moves from an LCD to an AMOLED display it's difficult to say what happens to battery life in the process. To evaluate the OnePlus 3's battery life under various scenarios I've run our 2016 WiFi web browsing battery test, PCMark's battery test, and GFXBench's Manhattan 3.1 battery test. 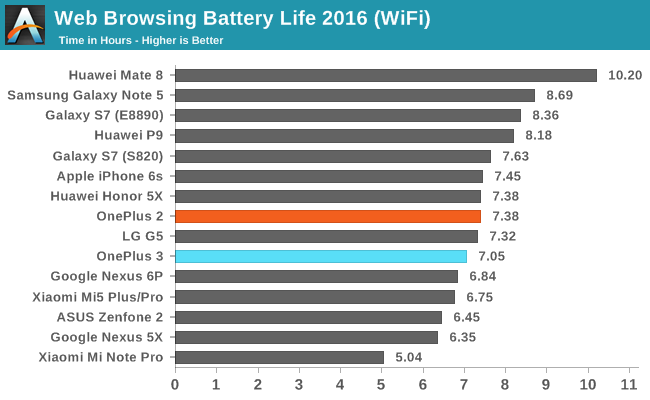 In my own usage I haven't noticed any problems with web battery life on the OnePlus 3. OnePlus definitely could have put in a larger battery, but it would have made the phone thicker and heavier which would have a negative impact on its ergonomics and usability. The OnePlus 2 basically feels like a brick in the hand, and all you get for it is an extra 300mAh over the OnePlus 3. The OnePlus 3 much nicer to hold in the hand, and the idea that you should compromise that by making it 3mm thicker and 30g heavier just to boost the battery capacity by 10-15% is ridiculous.

For those who are interested, I measured 6.47 hours when running this test over LTE. I've decided not to compare this result directly to our past reviews because I'm still unable to achieve a strong enough signal over LTE to get results that are comparable to those run by Josh and Matt, but the drop in battery life when running over LTE was only about thirty minutes which is a great result for -97dBm on LTE. 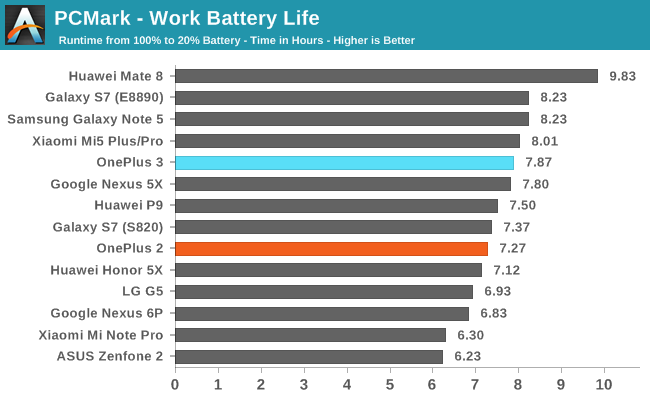 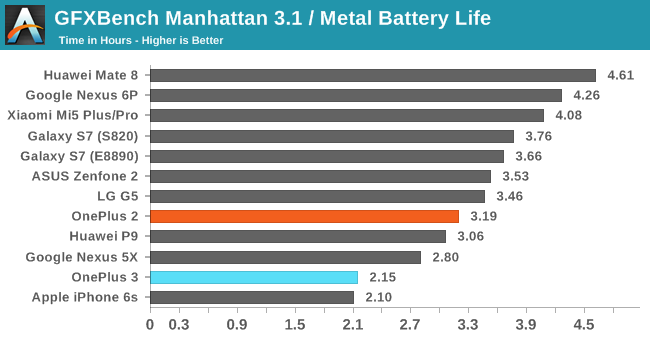 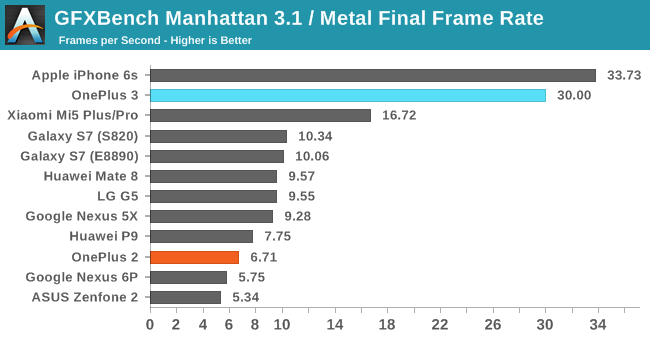 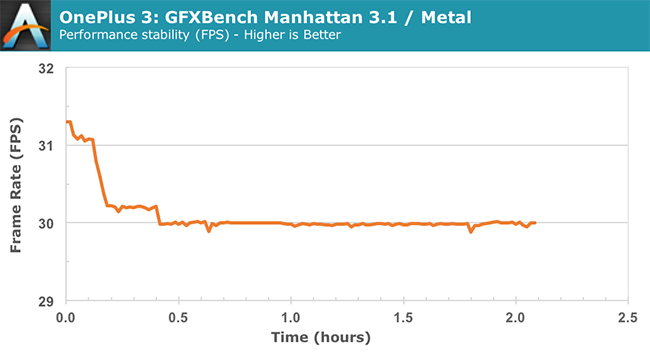 The OnePlus 3 does exceptionally well in our GFXBench Manhattan battery test. While it's by no means a leader in terms of absolute battery life, the performance it achieves is impressive to say the least. It's important to note that this is an on screen test, and so while the OnePlus 3 is a bit behind the iPhone 6s for sustained performance, it's also pushing a much higher resolution. The fact that the phone maintains its frame rate for over two hours is also an improvement over pretty much every other Android device, with the LG G5 coming close but exhibiting small oscillations that the OnePlus 3 doesn't have. Suffice to say, the OnePlus 3 provides a substantial improvement over the OnePlus 2 here, and I think anyone would agree that it's more fun to play a game at 30fps for two hours than to play it at 7fps for three.

In the end, the OnePlus 3 generally does as well or better than its predecessor in our battery life tests when you consider their context. In our 2016 web test battery life has dropped a bit, but it's not a significant decrease even though performance has improved immensely. PCMark battery life improves, and that's a test that reflects real world usage quite well. In GFXBench it doesn't last as long, but sustained performance is three times as high, and the frame rate the phone can maintain is high enough that a game with the visual fidelity of the Manhattan benchmark would actually be playable at 1080p on the OnePlus 3.

The OnePlus 3 introduces a new standard for quick charging that was created by OnePlus, which they call Dash Charge. According to OnePlus, Dash Charge moves much of the power management processes to the charger itself rather than the phone, which reduces the heat generated by a device as it charges. There isn't much technical information about what exactly is going on, but a reasonable guess is that the DC/DC voltage conversion is now going on at the charger instead of the device, which means the phone only has to handle the current limiting. Dash Charge also operates at 5 volts, and the included charger is a 5V 4A block for 20W of output power. It's worth noting that the USB Power Delivery implementations that we've seen operating at 15W also use 5 volts, so this isn't necessarily something unique to Dash Charge.

Of course, there is a caveat with OnePlus making their own protocol is that you're limited to their charging blocks.  On top of that, you're limited to using OnePlus's cords, with the charger not providing quick charging using other USB Type-C cables such as the Google-branded ones that I have. This is a significant drawback compared to Qualcomm Quick Charge and USB Power Delivery, although I would imagine most users will use the included charger and cable so it may not pose much of a problem in practice. 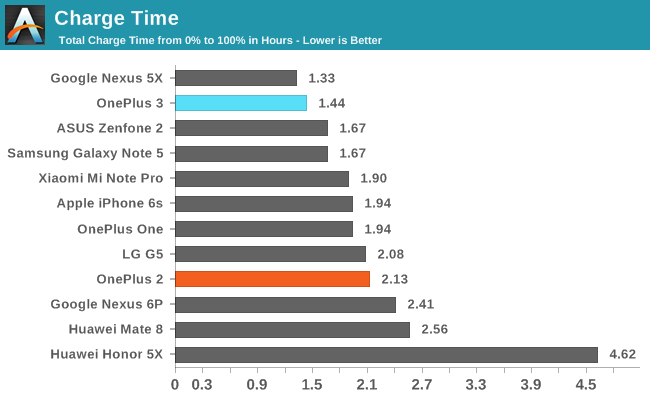 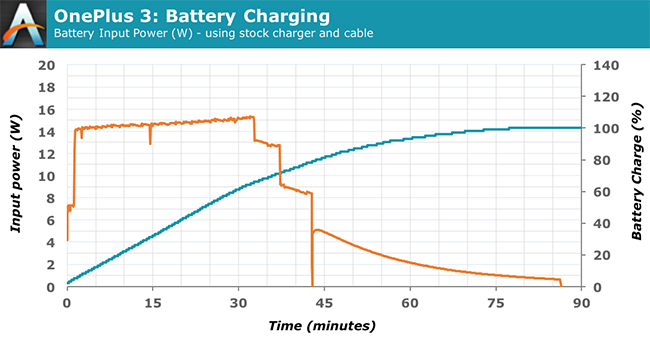 As a OnePlus-specific charging implementation, Dash Charge may not be as convenient as USB Power Delivery or Qualcomm Quick Charge, but it certainly charges the phone quickly. At 1.44 hours to go from 0 to 100% there's not really anything to complain about with the actual time to charge.

While Dash Charge is interesting in how it charges quickly and actually does manage to keep the phone cool while doing so, I'm not really sure if it's worth the trade-offs. If you lose your OnePlus cable you have to buy a new one from OnePlus, and you can't quick charge with the large number of Qualcomm Quick Charge accessories available on the market. If nothing else, Quick Charging is here on a OnePlus device, but it has more restrictions than one might have hoped, and it's not clear if the benefits are worth it.