OnePlus has moved back to Sony sensors with the OnePlus 3. What's interesting is that they've actually moved to a smaller sensor size, which was probably a combination of what was available within pricing constraints, as well as how thin the sensor needed to be to minimize the camera hump on the back of the phone. In addition to the sensor shrinking, the resolution has gone up, which means we're now dealing with 1.12 µm pixels rather than 1.3 µm pixels on the OnePlus 2's OV13860. At a quick glance one would expect that this means image quality will certainly be worse, but improvements in sensor technology from year to year make smaller pixel sizes more viable, and one can't conclude anything just based on the sensor specs alone.

The lens system remains similar between the two phones, with the same aperture and a similar focal length. OnePlus has also changed from laser autofocus to PDAF. While this is an upgrade in many respects, PDAF generally does not work well in low light while laser autofocus does, and so it's not the case that the move to PDAF will improve autofocus speeds in every situation. That being said, the OnePlus 2 is notoriously bad at focusing in the dark even with its laser AF so the actual focus itself in the dark may be improved with the OnePlus 3 even if it's not as fast. 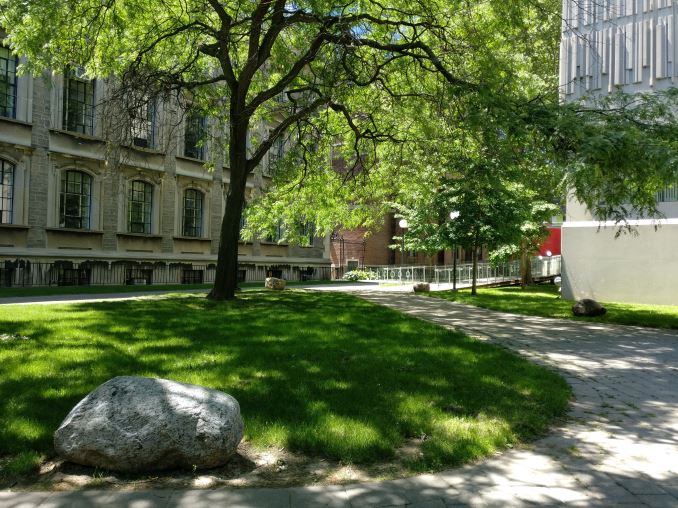 The OnePlus 3 performs very well in this test. Compared to a device like the iPhone SE or iPhone 6s there's definitely a greater level of detail and sharpness in the more distant objects, and in the branches and leaves of the tree. The OnePlus 3 also has a more natural exposure than the iPhone, but the white point does skew toward green which gives the entire photo a green look to it. The OnePlus 2 doesn't suffer from this issue, but it ends up overexposing the photo which produces a less natural looking appearance overall. One interesting point is that the OnePlus 3 has removed more detail in the grassy area than the OnePlus 2, which is a regression in detail that I didn't expect to see. My only other complaint is that the OnePlus 3's photo does push a bit too hard with the color saturation, and the Nexus 5X provides a photo that is closest to what the scene actually looked like to my eyes.

For a $400 smartphone the OnePlus 3 does very well here. OnePlus just needs to do a bit of tweaking to their image processing, but they're in a much better place than they were with the OnePlus 2 when it originally launched. Nothing here stands out as a problem with the camera itself, and OnePlus has been known to make many changes to image processing with their updates to OxygenOS so I expect that there will be continued improvements to still image quality as time goes on. 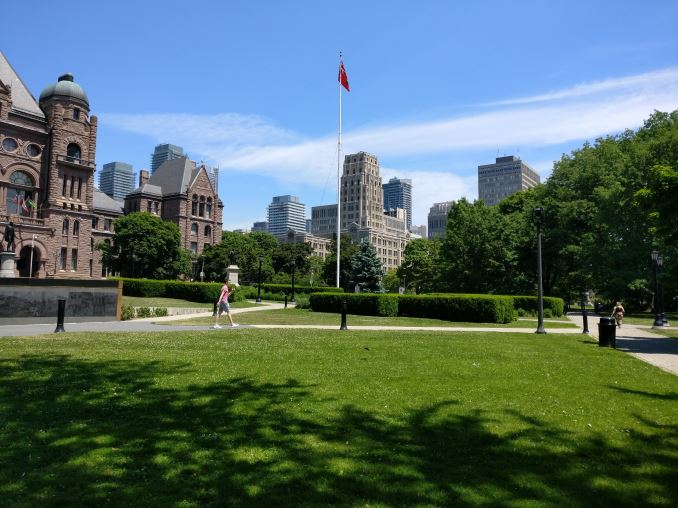 This next scene is a fairly standard outdoor scene, and the only area of difficulty would be capturing the detail in the distant bushes without producing significant sharpening artifacts. In this scene the OnePlus 3 again performs quite well, and I would actually say that it provided the best photo of the devices that I tested. Compared to the OnePlus 2 there's a noticeable improvement in sharpness, which is visible by looking at the brick texture of the building on the left and the leaves of the tree on the right. The colors in the scene are also more true to how it actually looked at the time. The one thing that doesn't look quite right are the bushes in the distance, which end up looking flat. Most of the other devices end up avoiding this, but they also suffer from areas that are overexposed and over sharpened, so every device has a trade-off here.

Ultimately there's not really anything that OnePlus is doing wrong here. The exposure and white balance are correct, and the level of detail is high, with significant improvements over the OnePlus 2's sharpness across the frame, and especially near the edges. 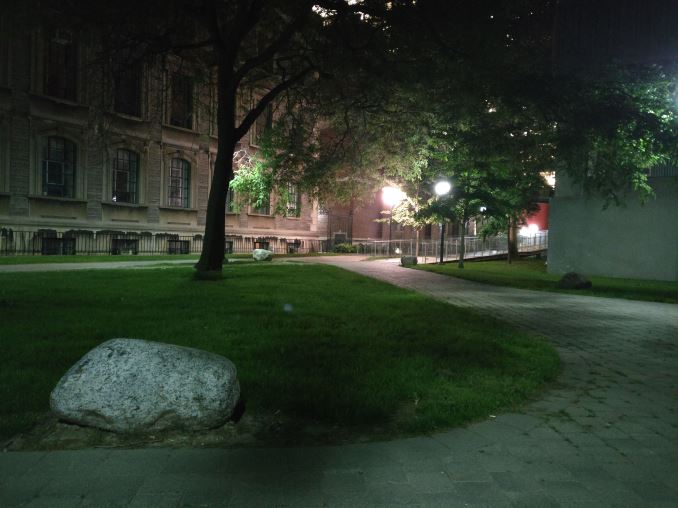 The low light performance of the OnePlus 3 improves significantly over the OnePlus 2. As I mentioned at the start of the page, the OnePlus 2 has serious issues with achieving focus in low light, and the shots here that I used for it are the best of many attempts. The OnePlus 3 is able to focus, and on top of that the detail retained in the image and the exposure are both very impressive. Of the devices I've compared I would say that the OnePlus 3's image is actually the best one, with the iPhone 6s coming after but being worse due to the increased noise level and lesser detail retained. I'm no longer testing the Nexus 5X using its HDR+ mode because Google has had more than enough time to fix their issues with normal image processing by now, and when you compare the OnePlus 3 to the 5X's stock processing it's clear that the OnePlus 3's low light capabilities are superior. 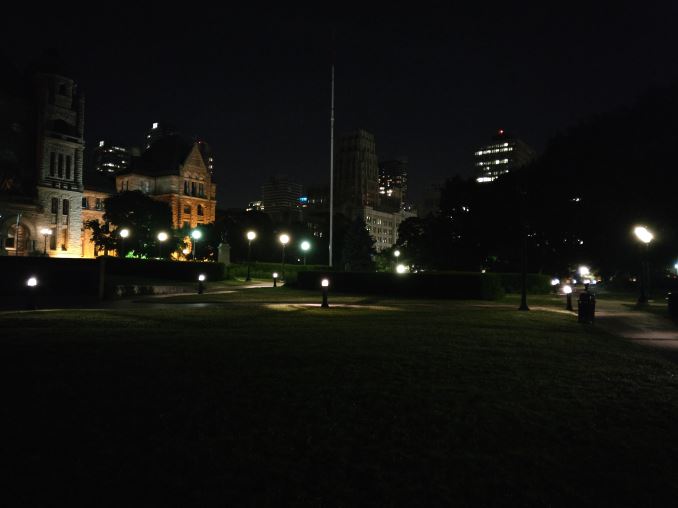 While the previous test was a low light test with lamps illuminating the area, this next test is really just to see how far each camera can push its exposure and how much detail can be maintained while also doing proper chroma and luma noise reduction. In this case it's again clear that the OnePlus 3 leads the other devices, with the OnePlus 2 failing to focus properly again, and every other device being decidedly worse with the detail retained, overall exposure, and noise across the frame.

In all my test cases the OnePlus 3 improves significantly over the OnePlus 2. OnePlus has come a long way from the early days of the OnePlus One where even basic noise processing didn't seem to be implemented properly. I think the OnePlus 3 provides great image quality for a $400 device, and it addresses pretty much every issue I highlighted with the OnePlus 2, which shows that OnePlus is listening to reviewer and user feedback to improve their devices year over year.

The OnePlus 3 certainly improves over its predecessor with still photos, but it's not clear whether the same can be said for video recording. Looking at the files doesn't show any improvement in quality from an encoding perspective, as OnePlus is still encoding UHD video at 42Mbps with the H.264 baseline profile. The audio is kept as a dual channel 96Kbps AAC track as well. OnePlus still has room to improve with the basic image processing and the stabilization provided by the OIS even if the video doesn't improve in bitrate, and I've recorded two videos to demonstrate the video quality when moving as well as from a mostly stationary perspective. Like many Android devices, the OnePlus 3 can only record UHD video for up to ten minutes.

Unfortunately, the UHD video recording on the OnePlus 3 isn’t very impressive. There are a number of issues with the footage, starting with stability. OnePlus is making use of their OIS, but they’re doing so in the same flawed manner as every other Android manufacturer who has implemented OIS when recording video. The problem is that the OIS is used to keep the video as stable as possible, which then fails when the OIS reaches its travel limit and resets, causing an extremely rapid shift in camera position which shows up as jerky motion in the video. This doesn’t pose a problem if you just point the camera somewhere and start recording, but if you plan to move at all while recording it makes for some really jarring footage.

In addition to jerky footage caused by the stabilization implementation, I’m noticing some severe issues with macroblocking that makes the footage look much lower in quality than you would expect from a UHD video on a modern smartphone. In both video samples you can see it in the sky and on the concrete paths, and it results in footage that just isn’t competitive with something like the iPhone SE which also costs $399. These artifacts aren't a result of any image compression on Youtube either, as they exist in the source files as well.

The OnePlus 3 improved significantly with still image quality, but the video quality has some serious issues. Most vendors are pushing higher bitrates than OnePlus is, and Apple is still ahead of all the other smartphone vendors here. It's not as though the OnePlus 3's video quality is terrible, but I feel as though there was room for improvement here but no action was taken.