With the iPad Pro, one of the main points of interest is its display. Although there are other elements to the iPad Pro like the stylus and the keyboard, the display is really the centerpiece of this tablet, especially when neither the Apple Pencil nor the Smart Keyboard come included with the iPad Pro itself. I think it goes without saying that everyone wants to have a great display on a tablet, but what determines a great display is often in question.

While it’s obvious that less reflectance is better, as is higher contrast and maximum brightness, things like gamma and color reproduction are often subjective as the same color will often look different to different people. In order to try and deal with this issue, we focus on testing all mobile displays to the same color accuracy standards. For now, the industry standard gamut is the sRGB gamut, along with power 2.2 gamma. Although the sRGB gamut is relatively limited compared to something like DCI-P3 or Rec. 2020, it remains an industry standard when compared to what exists on the market today. In order to test how well a display meets these standards in addition to other criteria, we use an i1Pro2 spectrophotometer for accurate color measurements along with an i1Display Pro for accurate contrast measurements. In order to organize this data into a readable format we use SpectraCal’s CalMAN 5 with a custom workflow.

In the case of the iPad Pro, it’s obvious that the architecture of the display is different from what we’ve seen in mobile devices before. Due to the sheer resolution, it seems that Apple is electing to use embedded Display Port (eDP) instead of the more traditional MIPI DSI interface used in smartphones. We’ve seen a number of smartphones and tablets this year ship with an 8 lane MIPI DSI configuration which allows for a theoretical maximum of 2715x1697 for about 4.6MP, but the 2732x2048 resolution of the iPad Pro means about 20% more pixels than what a 2 port MIPI DSI configuration can handle.

By comparison, eDP has been able to support 4K at 60 Hz or higher for quite some time. This is self-evident by looking at the number of laptops launched with a 4K display. With the iPad Pro, Apple claims that they’ve implemented their own custom timing controller or TCON. Some digging through the system files seems to corroborate these claims as there are numerous references to an Apple Agile DP Display SAC Controller. That’s a mouthful, but Agile seems to be the internal name for this controller, and DP seems to be a reference to DisplayPort, while SAC is likely a reference to Slow Adaptive Clocking.

Slow Adaptive Clocking is something that there's very limited public information on at this time. My best guess here is that this is actually related to the variable refresh rate technology that Apple is implementing in their custom TCON. On the surface this technology seems to bear a lot of resemblance to G-Sync or FreeSync, but rather than varying refresh rate to fit the GPU’s rendering rate the refresh rate only has two distinct settings at 60 Hz and 30 Hz depending upon whether the content on the display would benefit from the higher refresh rate. It’s likely that at least part of the reason why this is possible is the use of indium gallium zinc oxide (IGZO) TFTs which don’t leak current in the off state. This means that when there is a longer period of time between display refreshes, the liquid crystal retains its state rather than fading towards its original state of either completely open or closed to the backlight. 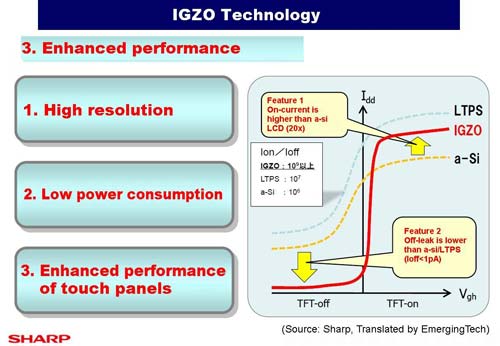 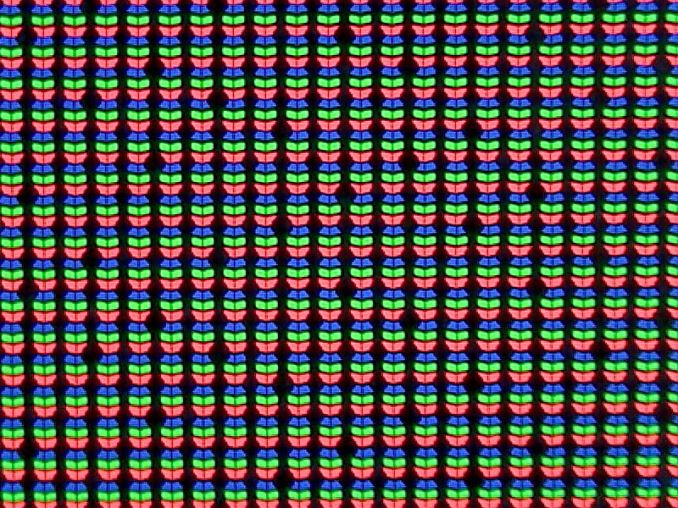 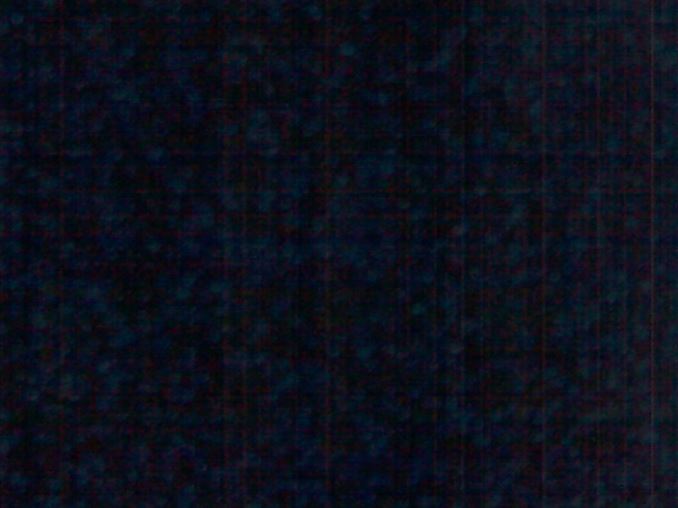 The panel itself also appears to have dual domain pixels and a conventional RGB stripe. Viewing angles as a result are quite good. The cover glass also contains the AR coating first introduced with the iPad Air 2, which cuts reflectance roughly in half relative to a display that doesn’t have such a coating. This effectively doubles outdoor contrast, so it’s great for outdoor use. 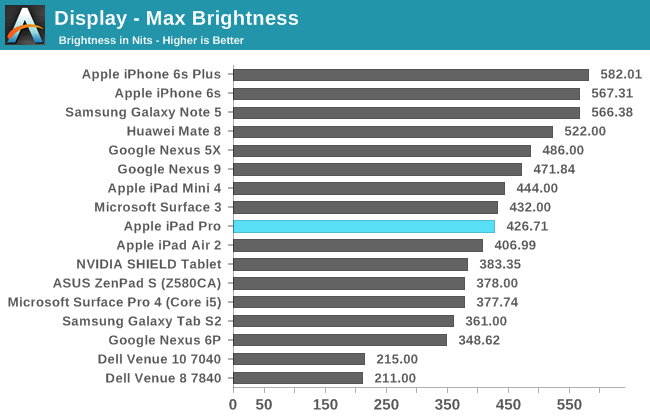 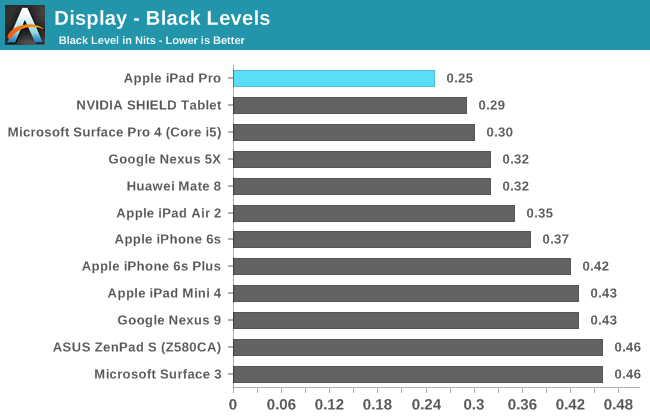 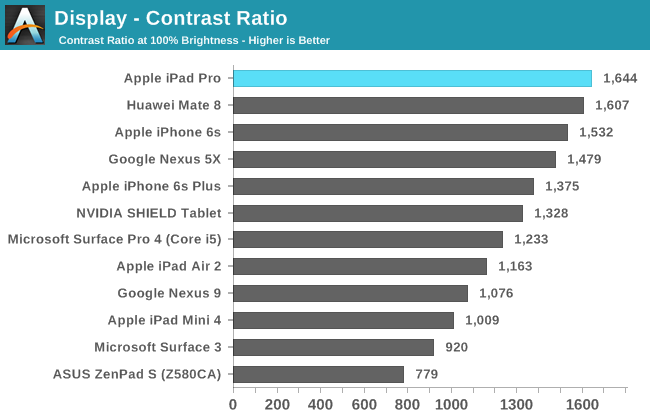 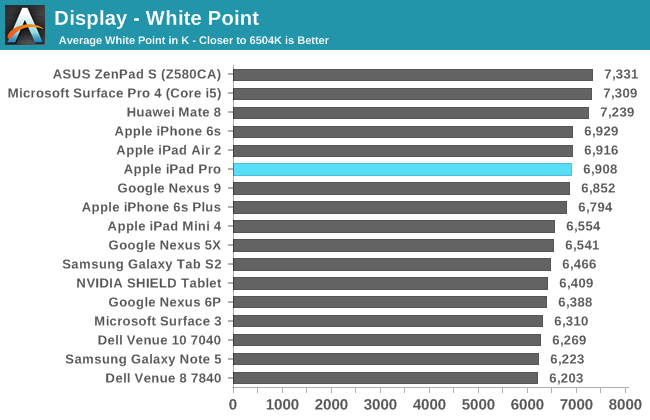 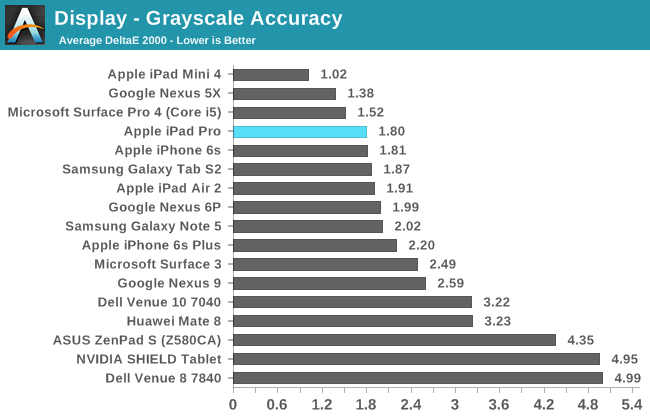 Moving on to our grayscale test, the iPad Pro does impressively well overall with well-controlled gamma but tending slightly towards a colder color balance. I’m not sure whether this is because of backlight efficiency concerns due to the use of blue LED with yellow phosphor in the backlight or because people seem to prefer colder white balances in general, but it’s there nonetheless. The cold color balance might affect some particularly color critical work but even for medical use I suspect it shouldn’t be a serious problem. 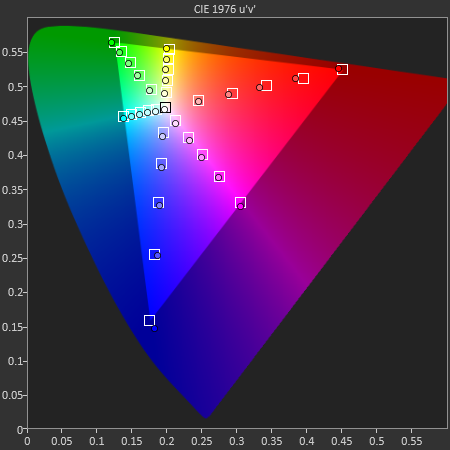 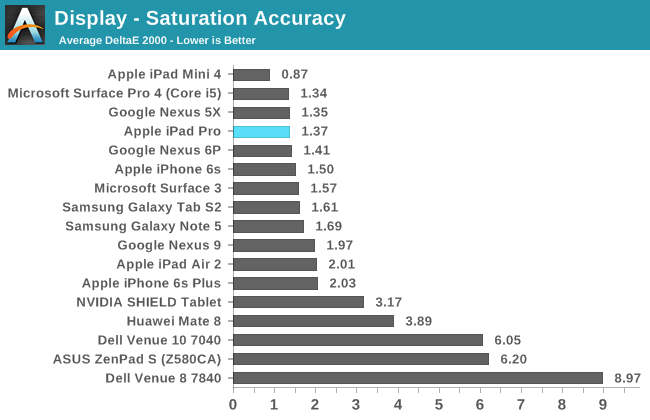 In saturations, the iPad Pro is basically perfect. There is some mild undersaturation of red, but I basically see no reason to try and find some method of personally calibrating the display. 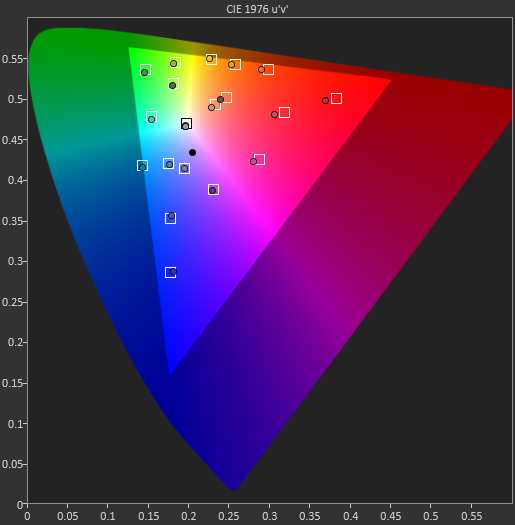 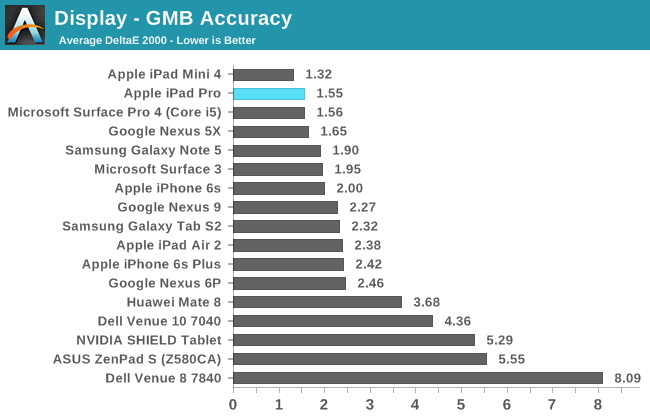 In the Gretag MacBeth ColorChecker test, color error is once again basically nonexistent. Anything with red appears to be mildly undersaturated but the error is going to be almost impossible to notice.

Overall, the iPad Pro display is probably one of the best available on the market today. The Galaxy Tab S2 display is comparable in overall accuracy and has superior contrast, but the iPad Pro has noticeably higher brightness for all content above 50% APL and in any scenario with a lot of ambient background light the AR coating will help a lot with improving effective contrast and general readability. Although pixel density is equivalent to the iPad Air 2, the sheer size of the display means that the viewing distance is increased and therefore the perceived resolution. The display looks great in person, and unless your single point of consideration for display performance is contrast I think it’ll be hard to be disappointed with the iPad Pro display.