Apple Maps has been the butt of many jokes in the tech industry since its initial release with iOS 6. At that time it was clearly not ready to start shipping, and it paled in comparison to the previous maps app which used data from Google. Apple was forced to issue a public apology for the issues, and recommended that users use mapping services other than Apple Maps. Since that time, Apple has steadily improved their maps by acquiring companies, sending out cars to do manual mapping, and adding new sources of information for businesses. Even with their improvements, Apple Maps has still lagged behind Google Maps in some key areas, with one of them being built in directions for public transportation. With iOS 9 Apple has implemented their own transit directions right into the app, bringing back a feature that was lost with the switch from Google to their own mapping service three years ago.

Ever since the original Apple Maps release I have used Google Maps to find locations and get directions, as it provides the same experience on iOS and Android, and because public transit directions are something I need. With transit returning to maps on iOS, I thought it was worth going back to Apple Maps to see what improvements have been made in the last three years, and how it compares to Google Maps in my local area. 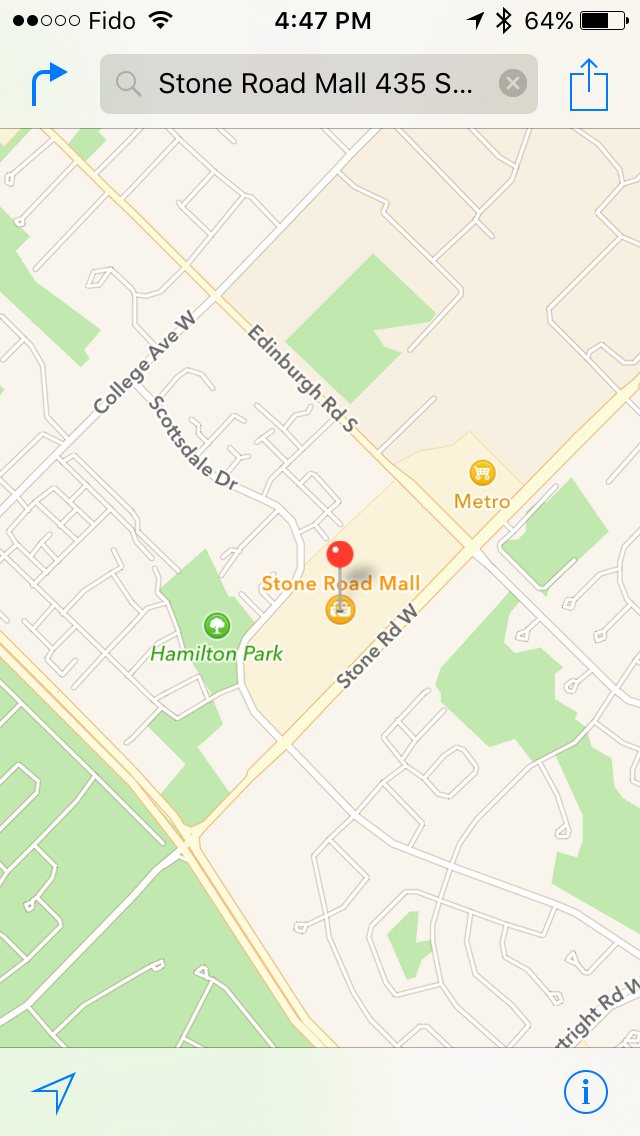 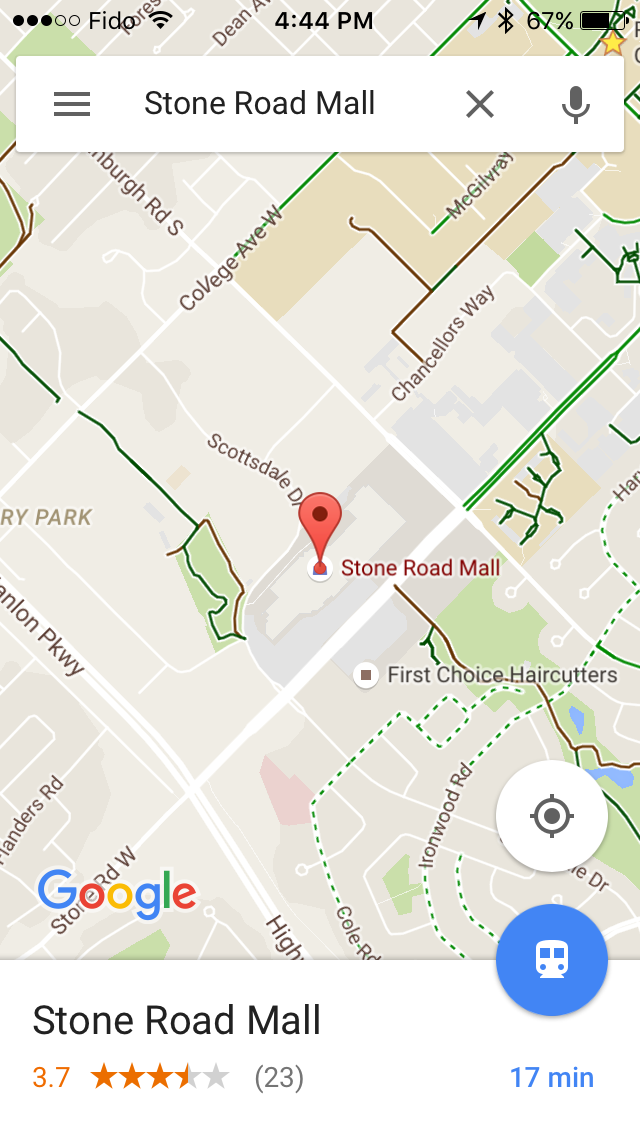 My first impression is that the Apple Maps application itself is better than Google Maps on any platform. Google Maps has always had fairly janky scrolling and zooming for me. Apple Maps definitely isn't devoid of stuttering, but it's normally significantly smoother than Google Maps. I find the aesthetics of the maps themselves to be nicer, and I think it's just due to the colors used and the fonts for the street names. The Apple Maps app also fits in better with iOS by following Apple's design and navigation guidelines, while Google Maps, like Google's other apps, feels like you're running an Android application and uses methods of navigation that are actively discouraged on iOS.

Google Maps certainly has a number of advantages though. I enjoy travelling by bike, and Google Maps has a really great overlay that shows you bike trails which are often submitted or edited based on user submissions. Apple Maps has no such thing, and I don't know how they would ever match the feature because it would require getting cyclists to submit to Apple Maps as well as Google, which will never occur to any meaningful extent. Google Maps also shows you the names of streets at a reasonable zoom level, while Apple Maps barely shows you any street names until you zoom so close that you don't even have a concept of where you are. The satellite imagery in Google Maps is also much better; it never turns to black and white like Apple Maps, and is noticeably higher in detail and resolution. 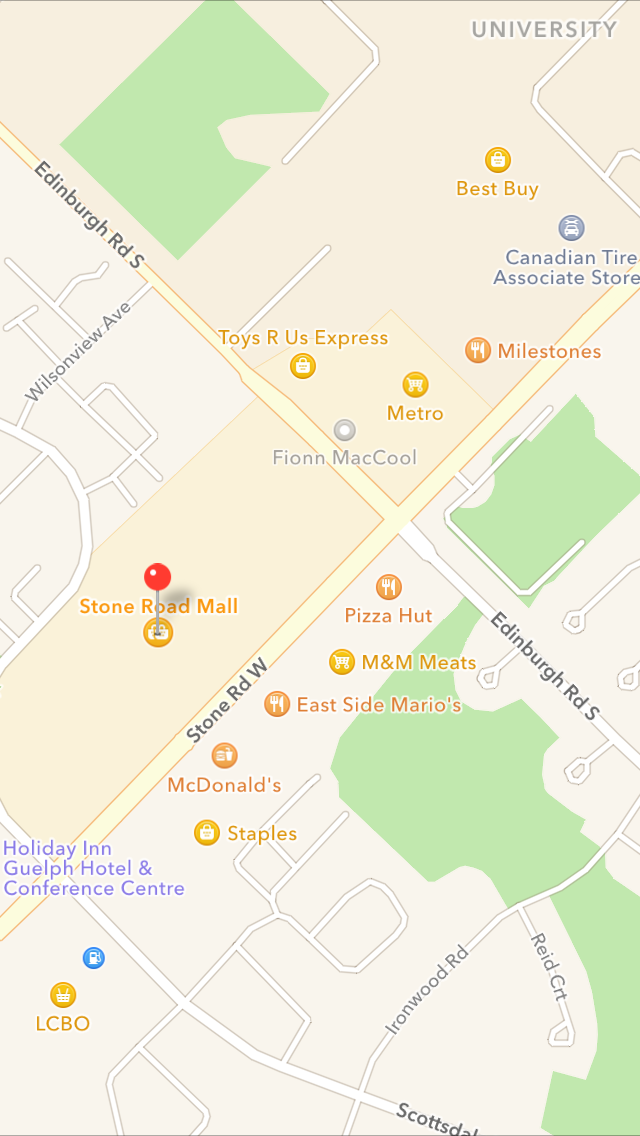 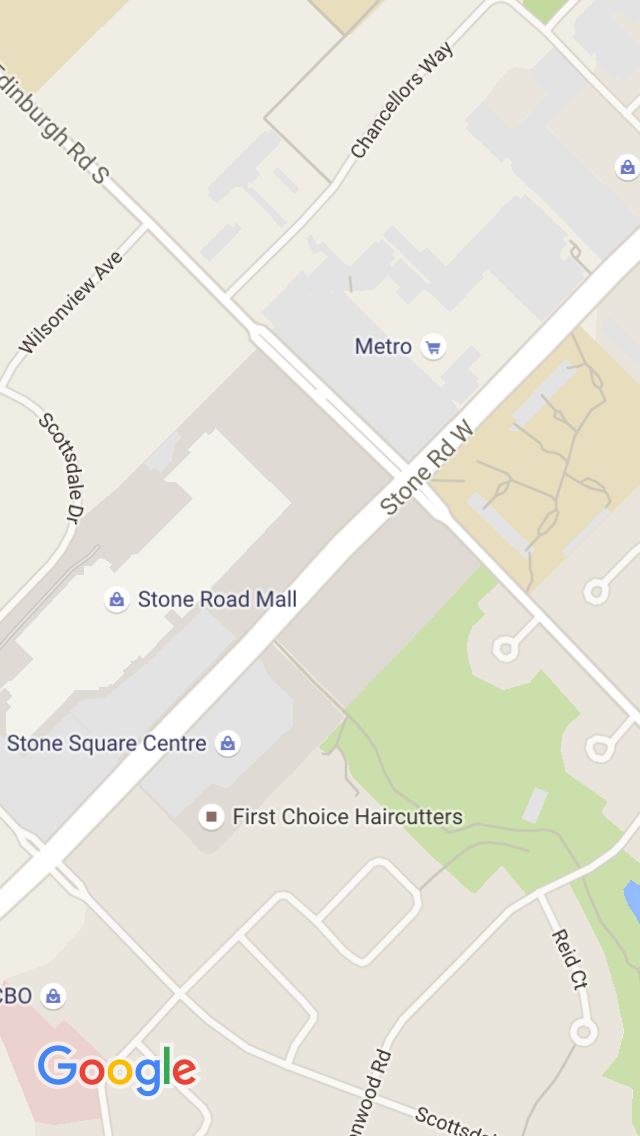 At the same time, Apple Maps has some advantages too. While it's very reluctant to put the names of streets, it lists many businesses and they all appear to be accurately placed. In contrast Google Maps does the same thing Apple Maps does with street names and makes only the ones it has arbitrarily chosen show up unless you zoom really close. If you're having to balance clutter I would probably choose to show street names rather than businesses though.

Both mapping apps actually had some issues with the accuracy of their mapping. Google Maps omits a ton of small streets that branch off of other streets, while Apple Maps marked a residential area as though it was a field. There are also some paths and roads that are marked in a questionable or incorrect manner in Apple Maps.

If I had to choose an application based solely on the quality and accuracy of the maps themselves, I would have to go with Google Maps. Apple Maps has improved greatly in my area since it originally launched, but Google has been in this business for far longer and they've collected and accurately marked a lot of data in that time. For my purposes Apple Maps is definitely sufficient, as I really treat my maps app more like a GPS device than a map, and so I was very interested to see what Apple has done with transit. 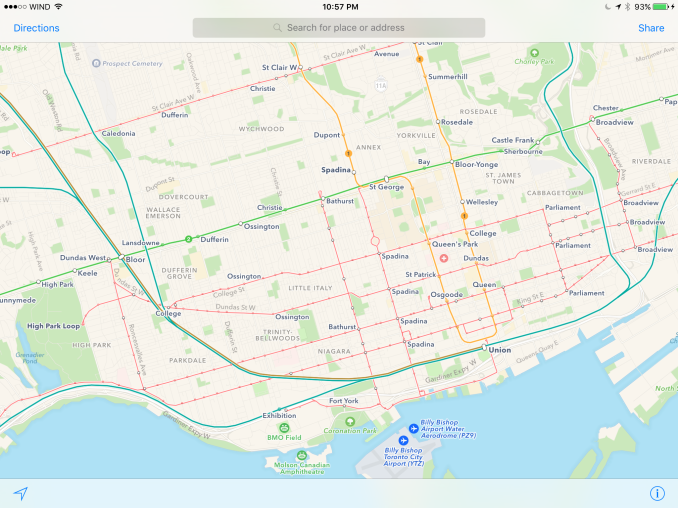 When Apple announced transit support at WWDC they did so in a somewhat confusing manner. It seemed that it would only support a handful of major cities, like New York, London, and Toronto. In reality, transit directions are supported in a great number of cities, and the ones specifically mentioned by Apple are the cities where they have created map overlays that show all the transit lines in the city. This is really not unlike the situation with Google Maps, where the cities that have transit overlays are big cities that have various types of public transport that run both above and below the ground. Clearly Google still has an advantage of scale, especially with Apple launching with few European and no Japanese cities, but these will be improved over time just like the maps themselves have been. 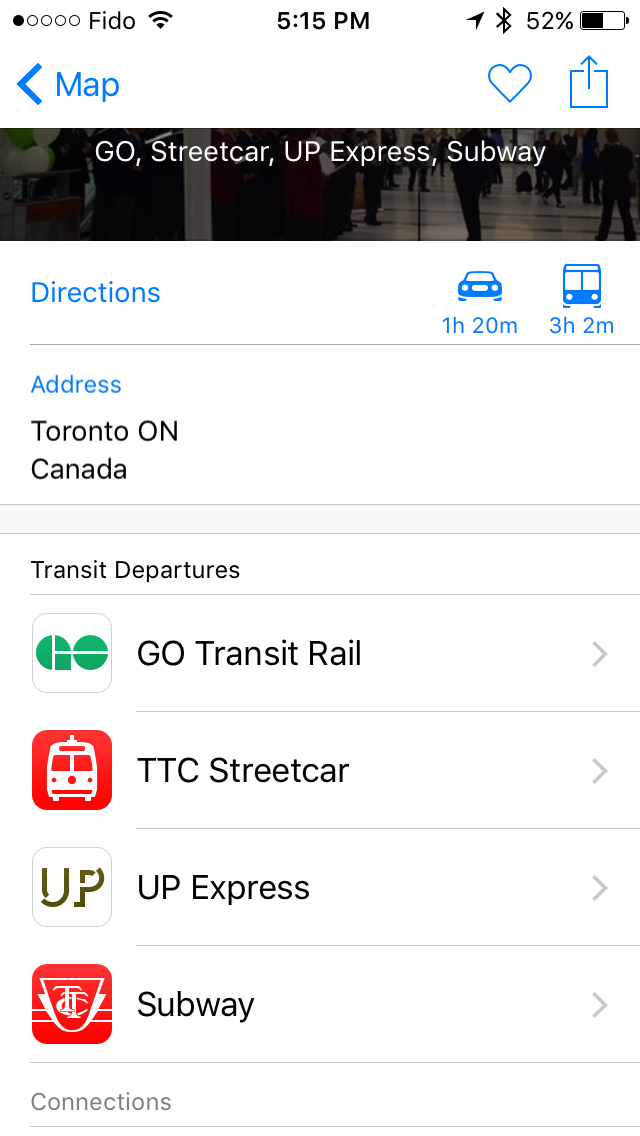 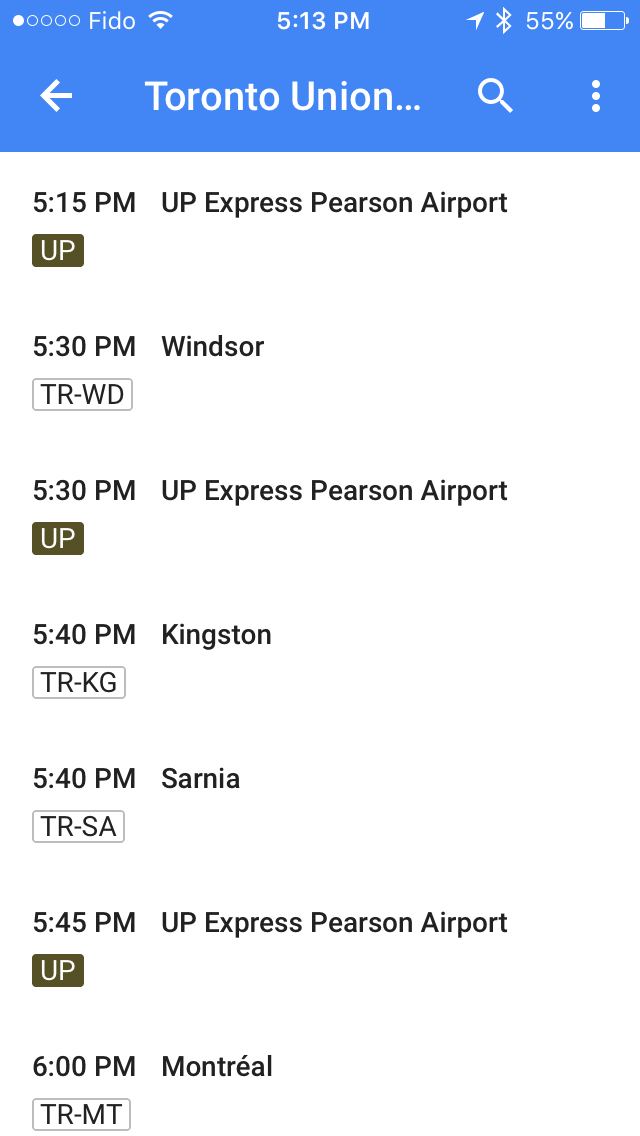 Of course, coming late to the party does give Apple a chance to think about what things could be done better about transit. For example, you can see above that when you select Toronto's Union Station in Apple Maps you're presented with a very clean view containing relevant info and sections for all the different transport services that run there. In contrast, Google's listing actually splits the station into five separate points on the map for the different transit services, and when you click on one the different transit lines are just laid out haphazardly. 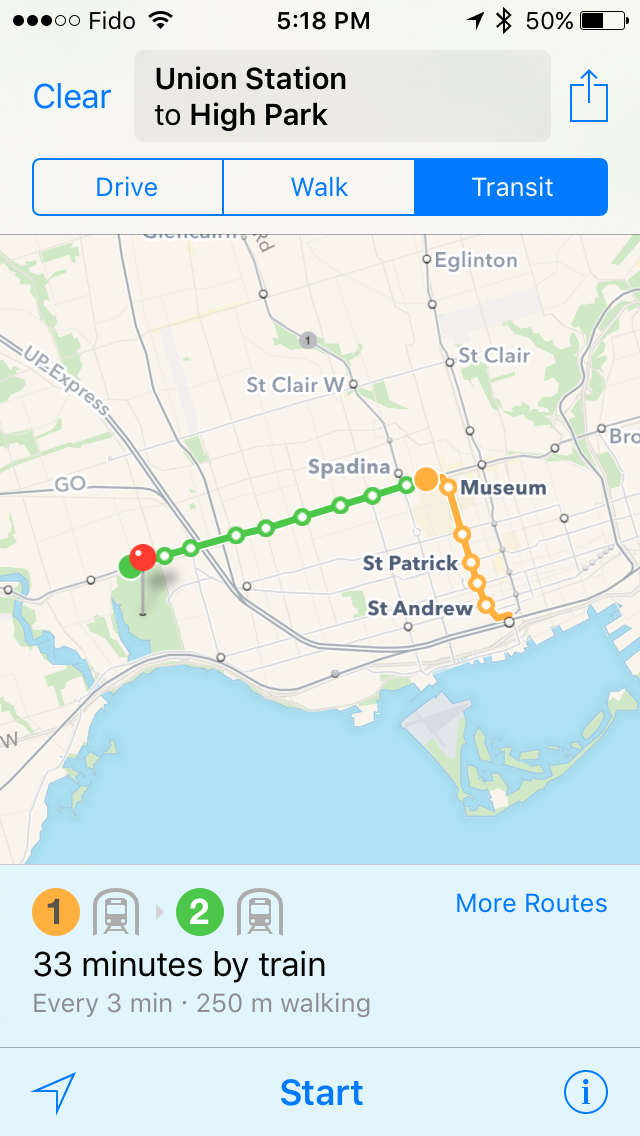 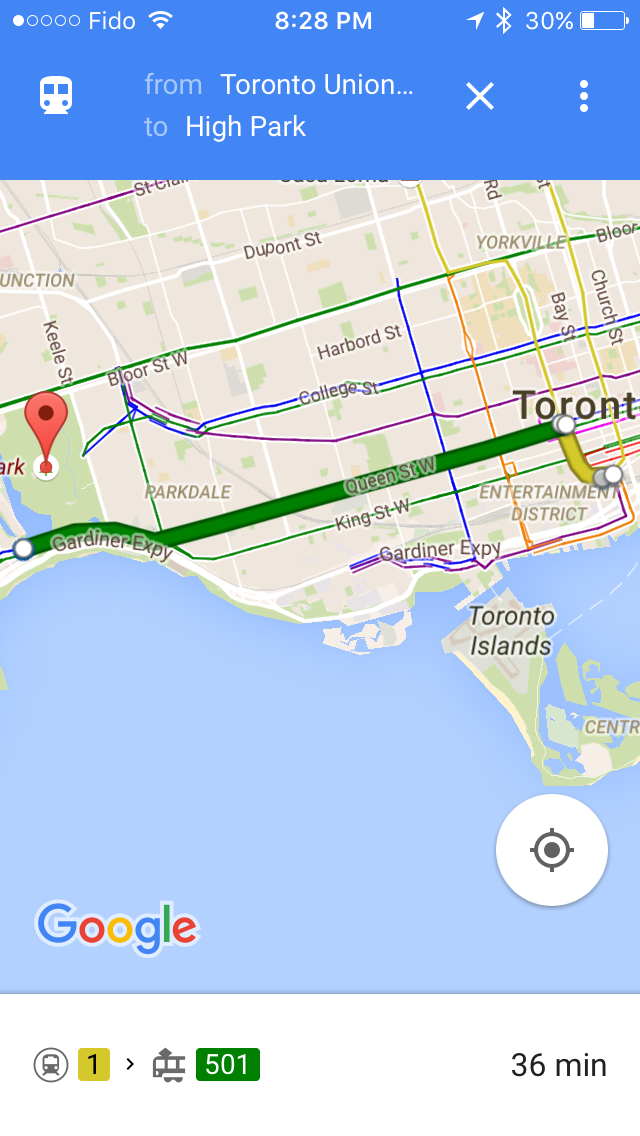 The most amazing thing of all is that contrary to the reputation Apple Maps has, the transit directions and maps are accurate! Not only are they accurate, but I've seen several situations where they give a more sensible route than Google Maps has, and I even had to deal with this firsthand when travelling in Toronto earlier this year. Above you can see me trying to travel from Toronto's Union Station to High Park. Apple Maps presents a very logical route which takes the subway for the entire journey. For whatever reason, Google Maps suggests taking the subway for one section, and then taking a street car which results in a longer journey and also places you in a less convenient spot near a loud expressway on the other side of the park.

I've also noticed that in my city the algorithm Google Maps has used to map the journey of buses has made a number of errors. I see several cases where your route apparently takes you floating over a river, or through the middle of residential areas. While these may seem inconsequential, if the errors occur near the beginning end of your route it can be difficult to tell where you need to get or where you'll be let off. Google Maps also doesn't let you know when a route has been put on a detour due to construction, which is another way to end up missing the stop you want to get to. It really sounds crazy even to myself, but in my experiences I've seen Apple Maps constantly outperform Google Maps as a transit tool.

Now before anyone gets the wrong impression based on what I've written here, I want to reiterate that these are only my experiences. I can't travel too far to test out maps, and I live in a fairly urban area. I've heard and seen the stories of areas where Apple Maps is still mapped completely wrong, or where there's no map at all. I'm sure there are lots of stories that run contrary to my experience. However, with Apple Maps being used by 3.5x the number of users that Google Maps on iOS has, it's clear that a lot of users do find the default maps app to be satisfactory.

My big complaint now is that there are no bicycle routes, and that's an area where I predict Google will have a continued advantage. With that said, I think the better performance and better design of the Apple Maps app are serious points to consider as well. If you're someone who turned away from Apple Maps initially like I did I would encourage you to give it another try. If it's a disaster, then Google Maps is still there to provide great mapping info. However, I think the good aspects of Apple Maps may surprise you, as they surprised me.