Low power mode is a new feature in iOS 9, and it's fairly self-explanatory. Android OEMs have been adding similar features for a while now. When your battery hits 20% the normal low battery popup will appear, but it now has a button to turn on low power mode. Apple hasn't specifically detailed what they're doing in low power mode, but they have given a broad overview of what they're doing, and some of the things can be measured manually. Low power mode makes the following changes:

With all of these changes, Apple says that low power mode can extend battery life by up to three hours if used for an entire cycle. You can actually enable the mode manually if you want by going to the battery section of the settings application. The low power mode will also automatically disable itself once the device is charged to 80%.

As for some of the specifics, I can confirm that the iPhone 5s will bring the SoC to a state where the max clock is 800MHz, while the display on this specific unit drops from 523nits to 414nits. I hope to get figures for the iPhone 6 and 6s as soon as possible, and I'll update this section once I have them. It's difficult to measure the impact of something like low power mode, as it's still heavily dependent on how you use the device. Regardless, it's good to see Apple bring this sort of feature to iOS, and I would be interested to see which users decide to use it all the time to improve their battery life even if it requires sacrificing apps running in the background and a degree of performance.

The iOS Notes application has been fairly simplistic since its original incarnation. You can add text, and if you long press you can insert images. Through some copy and paste magic you could end up getting text formatted with different fonts and sometimes features like bullets, but that implies that you had to write it out in another application anyway unless you’re pasting right from the web. In contrast, an application like Google Keep on Android has support for other features, like making checklists of items. Something like Evernote provides even more features that make the iOS stock app look bare in comparison. In iOS 9 the notes application receives a large overhaul, with a number of visual tweaks and new features. 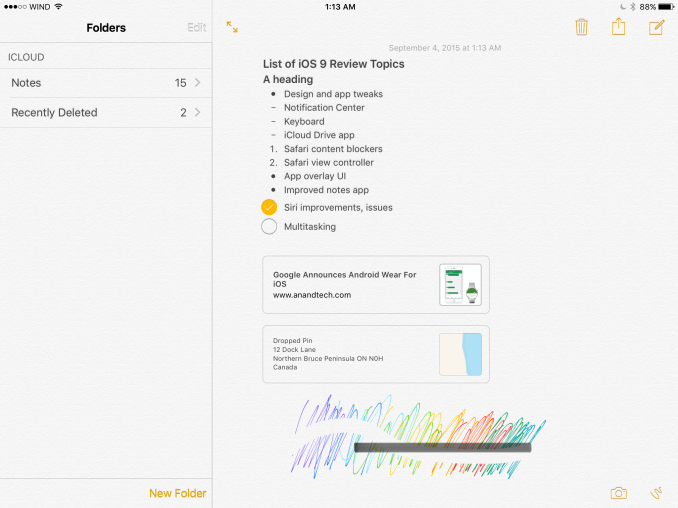 Notes on iOS now supports rich text formatting. You can change whether your text is meant to be for a title, a heading, or a body of text. You can also make text bold, italicize it, or underline it. There’s still no support for fine adjustments like setting a precise text size, and for those controls you’ll still need to rely on a third party application or on Pages. To be fair, it’s not in Apple’s best interest to kill the viability of making third party note applications.

In addition to the font formatting you can also make lists using bullets, dashes, or numbers. There’s also the ability to create checklists, which I have used a few times during the course of writing this review to make sure I haven’t forgotten anything that I want to cover. You’ll also notice in the screenshot above that you can link to locations, webpages, voice recordings, and other content and they’ll be embedded in the note inside a rounded rectangle. 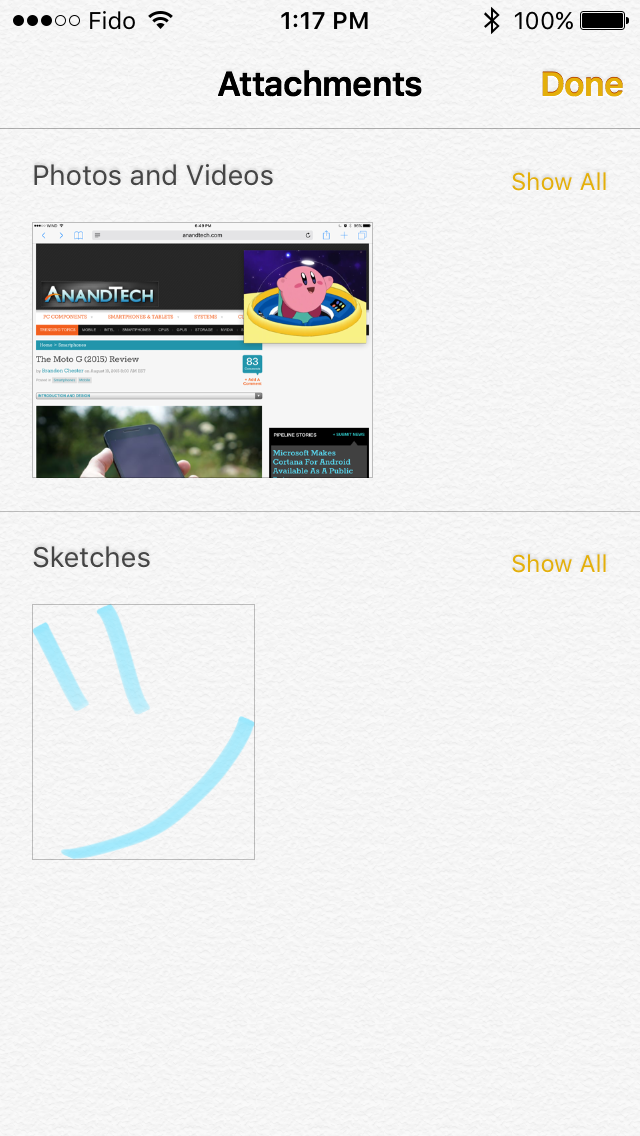 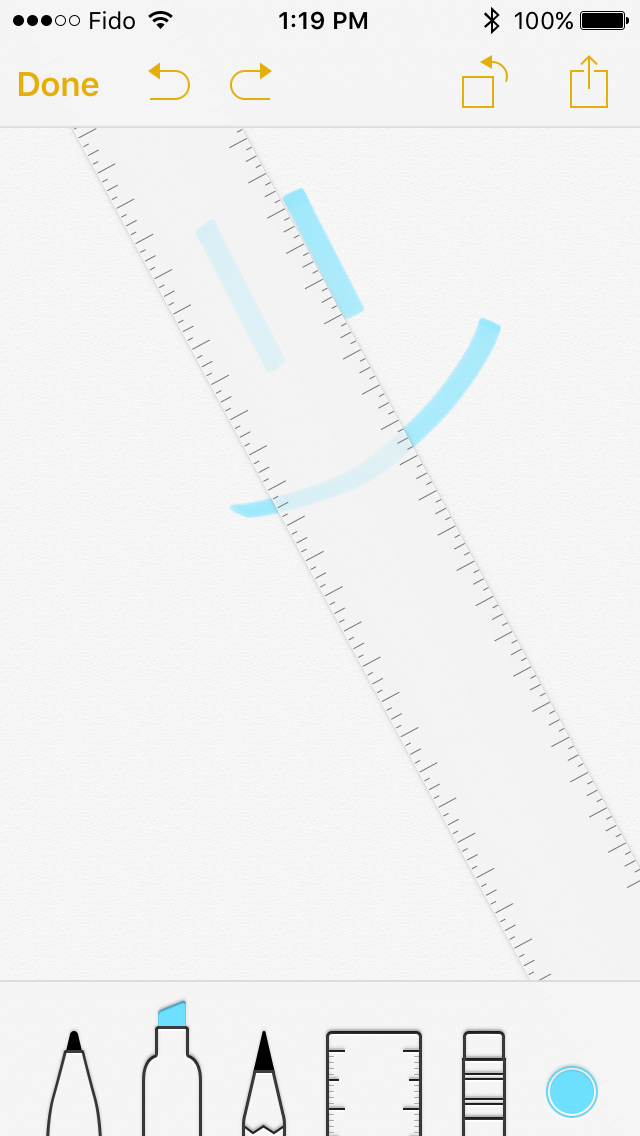 Something else Apple has added is the ability to draw on notes. Clicking on the squiggly line on the bottom navigation bar opens up a drawing section which has different virtual tools to draw with. There's your standard fine marker, a thicker tool like a highlighter, and a pencil. There's also a ruler which can be used to draw straight lines, and both an eraser and undo/redo buttons for any mistakes.

While the ability to draw on pages is interesting, it’s not implemented the way I had hoped it would be. Your sketches are essentially images in the note, rather than being drawings that you can position anywhere. An app like Notability lets you put scribbles wherever you wish, which can be helpful when you want to emphasize something or put yourself a note in a margin. Since your sketches are just images they have to be positioned above or below a line of text, and cannot be put to the right.

The last thing worth mentioning about the new Notes app is that Apple has also added the ability to view all the images, sketches, and attachments that exist within all of your notes. This can be helpful when trying to find a note based on a photo or a link inside it when you aren’t sure exactly what sentence or list you had in the note alongside it.

I've always felt that the iPad has one of the best first party tablet keyboards out there. I think part of it has to do with the 4:3 aspect ratio allowing for keys of greater height in landscape, which means you aren't dealing with rectangular keys that result in uneven movement depending on whether you're moving your fingers vertically or horizontally. The iPad keyboard has also had some unique features that the iPhone doesn't, such as the ability to split it into two parts by pulling outward from the middle. However, when Apple added QuickType suggestions I always felt like there was a lot of wasted space on the left and right sides where there were no suggested words. In iOS 9 the iPad keyboard gets a few feature additions that can greatly improve productivity, and fills in those empty areas in the QuickType bar while doing so.

The most obvious addition to the keyboard are the new shortcut keys on the left side of the QuickType suggestions. Depending on the context these buttons will differ, but by default you get a pair of undo and redo keys, and a paste key. If you select text these buttons change to a cut key, a copy key, and a paste key. They also change in different apps, with the Notes application condensing the standard 3 shortcuts into an overflow menu, and adding a button to create a checklist as well as a button to adjust the formatting of text.

On the right side of the keyboard are additional shortcuts that depend on the application you're in. In Notes they are buttons to insert images and access the sketch screen, while in Mail they're for text formatting, adding images, and adding attachments. Many apps don't have shortcuts here at all, and you'll have to open up the keyboard in an app to see what you get.

More interesting than the new shortcuts is the ability to use the keyboard as a trackpad of sorts. It's not something that allows you to bring up a mouse cursor and move it around the screen, but in apps where you're inputting text it allows you to move that input cursor and to increase or decrease the size of a text selection field. To use this trackpad mode you need to place two fingers on the keyboard at the same time until the keys go blank. After that you can move your fingers around and the cursor will track with them. It's a useful way to move the cursor within a sentence to insert a word, or to accurately change the size of a selection by only a letter or two.

One last thing I'd like to mention is that the case of the letters on the keyboard now changes depending on the status of the shift key. This fixes a longstanding issue with the shift key on the iOS keyboard that has existed since iOS 7. The change applies to both the iPad and iPhone keyboards, but I felt it was best to just mention it here.

Ultimately, I think the changes Apple is making to the iPad keyboard go hand in hand with the new multitasking features that I'll be discussing later in the review. They represent the iPad finally growing up and becoming its own device. It was never correct to say that the iPad was just a big iPhone, but from a high level the two devices did provide similar experiences as they used the same applications and operating system. Adding features that are very specific to the iPad differentiates it more from something like the iPhone 6 Plus, and improves its ability to be used to get actual work done.