Once upon a time I used Pulse to keep track of the news and reviews coming from my favorite websites. That seems like a long time ago now, as once it was acquired by LinkedIn the Pulse app received a number of updates that negatively impacted the interface and the app’s performance. At that point I abandoned it for Flipboard, which has been my news application of choice on both Android and iOS up until this point. At WWDC 2015 Apple announced that they were creating their own news reader called Apple News, and that it would be launching with iOS 9. Naturally I was interested in seeing how good it was, and if it was good enough to merit replacing Flipboard with it on iOS.

Before I go forward, I have to mention that Apple News is only launching in the United States, United Kingdom, and Australia. The content is hardly regional though, so I have no idea why this is the case. Until your device is set to one of these regions the app won't even show up, and if you want to get around this restriction you need to go to Settings > General > Language & Region and set your region to one of those three places. This doesn't require you to change your language, but it does change the formatting of dates, currencies, etc. 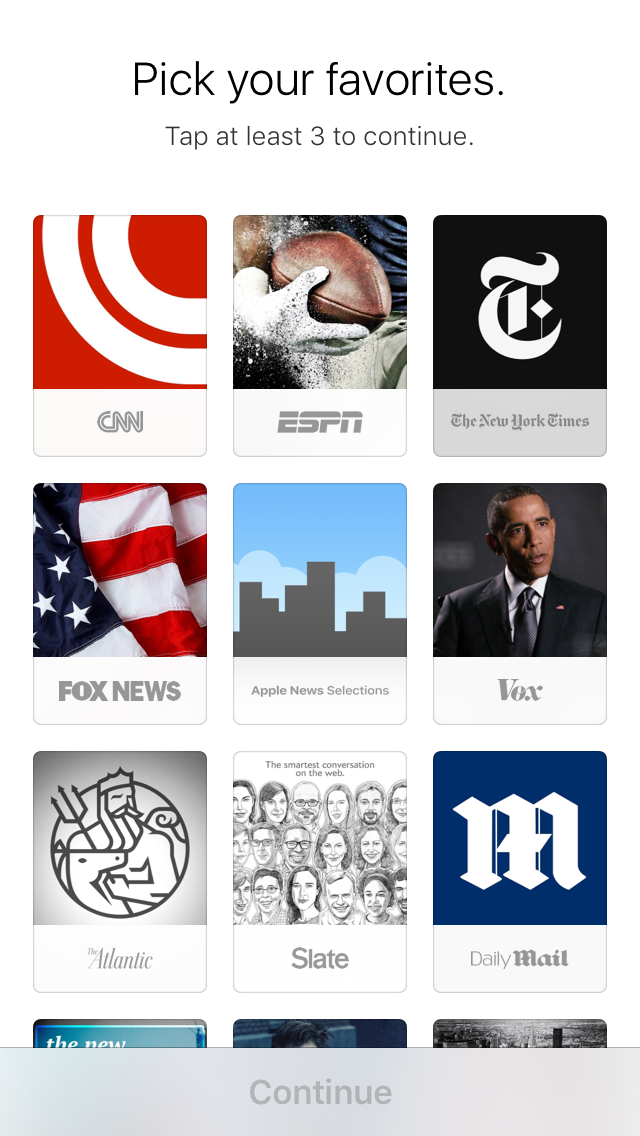 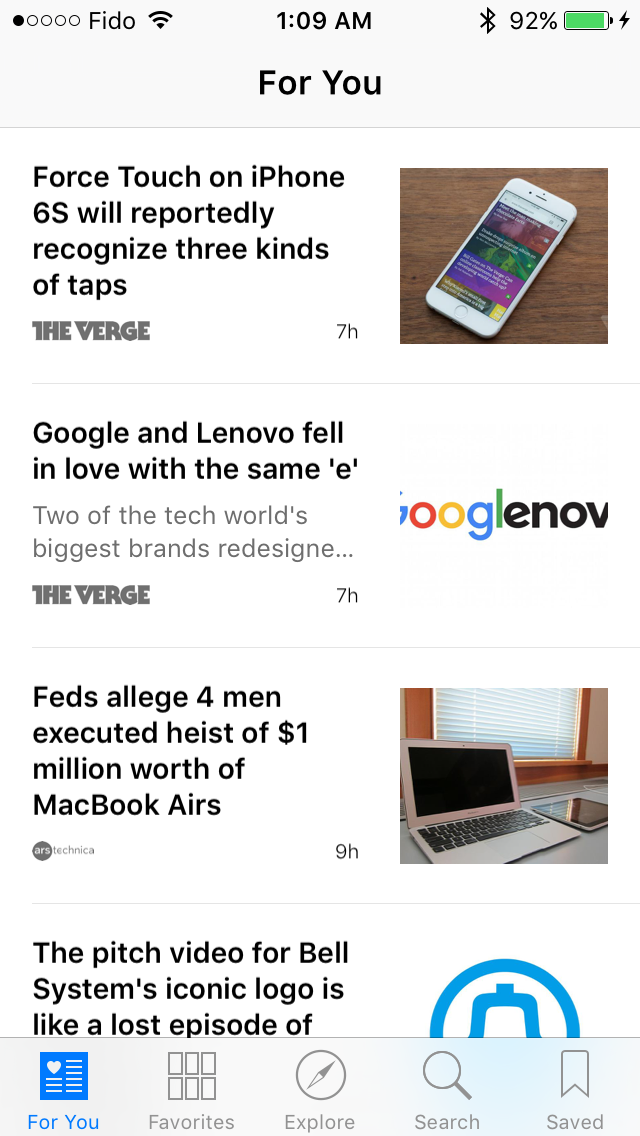 When you first launch Apple News you’ll be asked to add three of your favorite news sources to the app. The app is intelligent about offering additional selections based on what you initially choose. For example, if you scroll down and decide to add AnandTech as a source the list will begin adding additional news sources related to technology. Once you’ve picked three or more sources you’re ready to start using the app. The first screen you’ll see is the “For You” screen, which aggregates stories from your selected news sources and topics. I’d imagine a lot of users will spend their time reading here, but I personally like to dive into a specific site or topic, which you can do from the favorites tab.

Of course, you’ll likely want to expand your news sources beyond what you initially chose when you’re setting up the app. Apple has two methods of doing this. The first is to go to the explore tab. This section has lists of channels and topics which are selected based on what sources you already have. You can also scroll down to browse news sources by topic, which can be a good way to find a new source about a topic you enjoy reading about. If you already know what you want then there’s no need to go exploring, and you can instead go to the search tab to search for a topic or a website.

At this point Apple News seems pretty good, but it hasn’t really done anything that an existing news application like Flipboard doesn’t already do. The real appeal of Apple News is in the content, and more specifically, how nice it can be to read content designed for the Apple News format. At this point I’m going to switch over to the iPad, as the large display really works great with the formatting of Apple News articles, and in general it’s just a nicer way to read news than a phone. 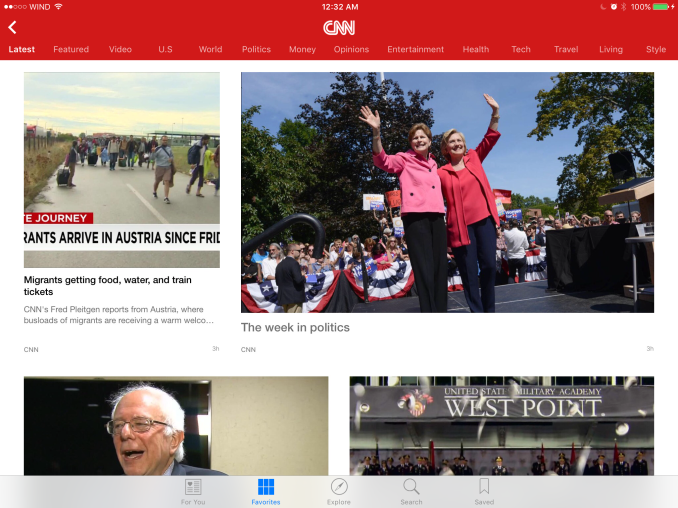 Most publications haven’t fully taken advantage of the Apple News format, and are just providing the same RSS feed as they would to other applications. This is because the format has only been available to selected sites in a closed beta during the iOS 9 beta cycle. In those cases you don’t get the same experience as publications that have, but you still benefit from the layouts and typography of articles in Apple News. Publications that present articles designed for the Apple News format are a whole other story. As you can see above, CNN has decided to customize their hub with a list of topic sections along the top. When you’re reading news from a particular publication that has done the work to add these things it feels just like being inside a native application, but without the storage usage and clutter on your device that having separate apps for every news source would create.

The experience inside the articles themselves is also better than any other news reader I’ve used in the past. Standard articles still look nice because they’re formatted well, and Apple has made good choices for the fonts and sizes to use for different types of text. When you get into articles designed for Apple News the experience gets even better. Like I mentioned before, it really feels like being in a native application for a publication. There can be animations, parallax image scrolling, Gaussian blur, and special text formatting. These things improve the experience by adding things, but there are also improvements made by taking things away. There are no auto playing videos in the articles, and no intrusive advertisements that scroll along or pop up and block your content. The features involving smooth scrolling and animations are very difficult to do well on the web, and it’s really not something other news apps can compete with if they’re just using standard RSS feeds for websites.

I mentioned that there are no intrusive ads in Apple News and in fact at this point I actually haven’t seen any advertisements at all. I know that they will be coming at some point because publishers need to make money, but I don't know when that will be. What’s great is that the ads won’t be intrusive like the ones you’ll get when you visit many of these publications on the web, which is another win for users.

Of course, there is one downside to Apple News that could force some users to continue using other services, and that’s the lack of support for adding RSS feeds. Thankfully, an extremely large number of publications have added themselves to Apple News, including ones that primarily cover Microsoft and Google which confirms that it's not an echo chamber of Apple related news. That being said, there are a couple of sites that I normally check from time to time that aren’t on the service yet and while none of them are sites I consider essential enough for me to stop using the app, it’s very possible that for the time being a user could be missing a site that they really need supported.

Based on the current support I see, I think it’s clear that websites and publishers are already aware of how necessary it is to be on Apple News, and if a publication isn't on it yet it certainly will have to come sooner rather than later unless it's a publication so specialized and unique that users are willing to visit it through Safari because there's no alternative. Being a default app for an operating system comes with a lot of power because users will choose it based on its immediate accessibility, even when it’s not as good as some third party alternatives. However, in the case of Apple News I honestly feel that it is the best news reading application I’ve used to date, and I miss it a lot when using devices like the Nexus 9 and Galaxy S6.