Google Updates Hangouts For iOS With A New Interface 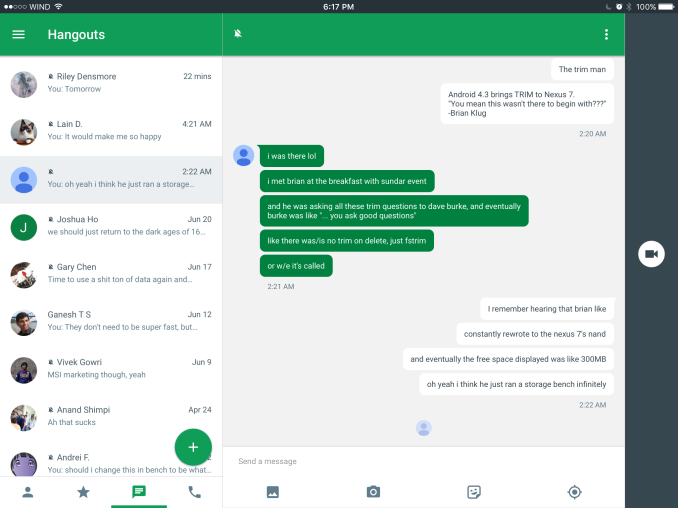 Today Google shipped an update for their Hangouts application on iOS. The update brings the version number to 4.0, and rightfully so as it comes with a new design for the entire application. Although this is an iOS application, it feels very much like an Android application as it follows the same Material Design principles that Google's Android applications use.

Above you can see the conversation view for the application running on an iPad. It still retains the bar to initiate a call with the person on the right hand side, which may pose a problem in the near future when users pull from that side to initiate multitasking on iPads running iOS 9. There are a few other iPad specific changes, such as a green circular send button that only appears when you've inputted text. The app has some issues with rendering on the iOS 9 beta so I can't take screenshots of them. All of the other changes that I note below exist within both versions, with the exception of UI elements that only exist in one of the layouts such as the navigation buttons at the bottom. 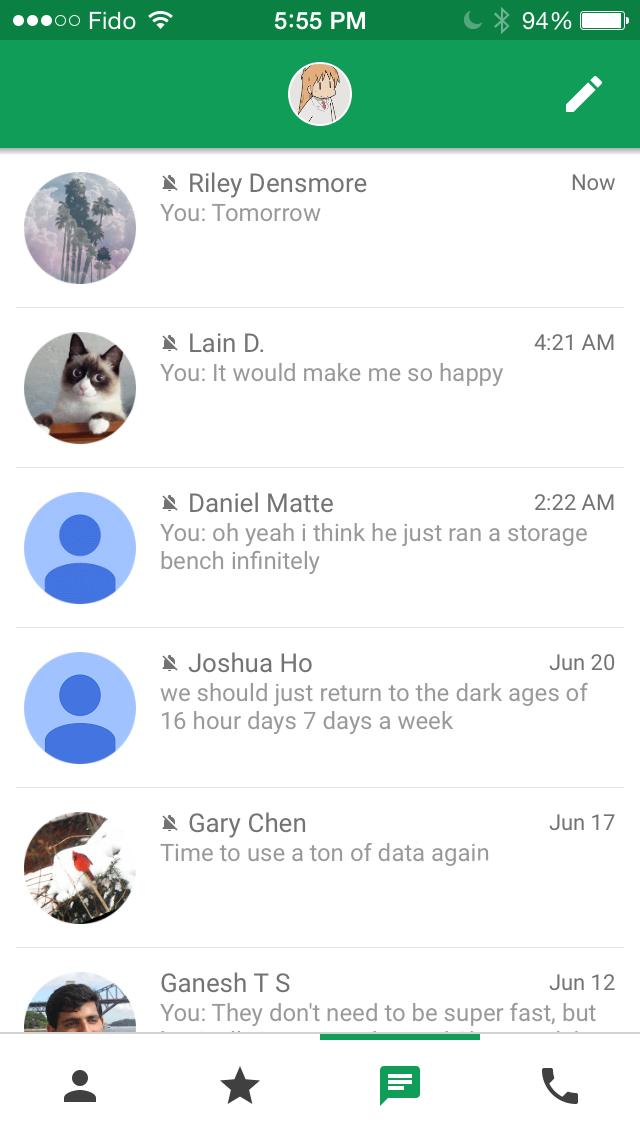 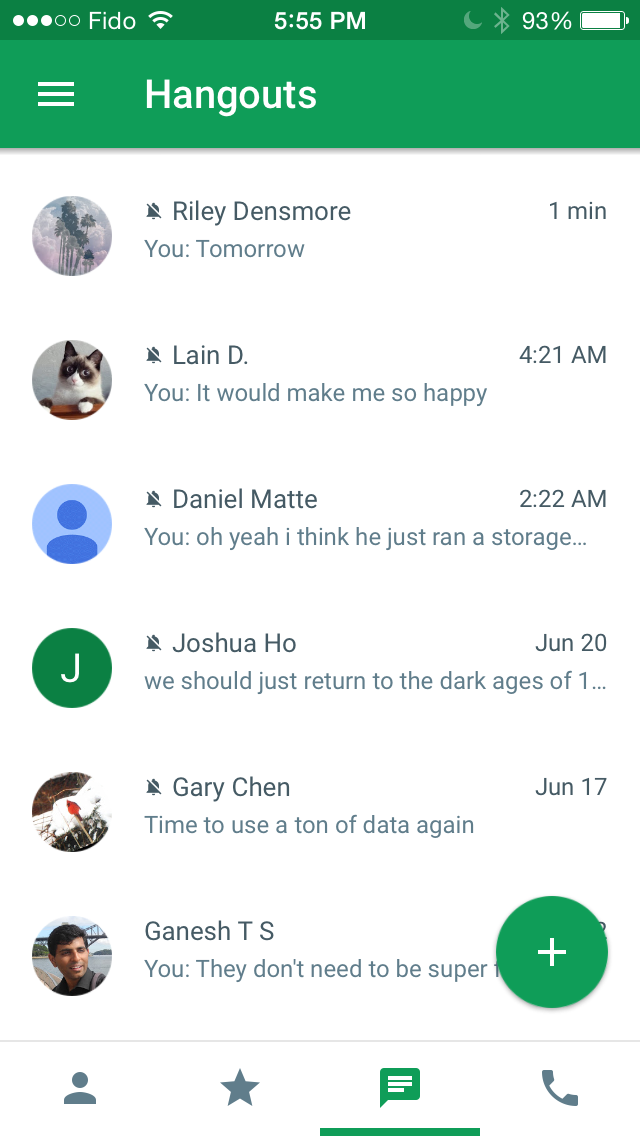 The main screen of the application only receives a few changes, but they're noticable. The app now adopts the circular button for starting a new conversation that has become standard in Google's applications, as well as the navigation drawer which can be accessed using the hamburger button in the top left. This is a difficult situation, because while the navigation drawer is used within all of Google's applications on Android, it's discouraged by Apple and their design guidelines for iOS applications. I think in this situation it would probably be better for Google to follow the guidelines of the platform they're designing for even if it means there has to be some fragmentation between the design of their apps on iOS and Android.

In addition to the new forms of navigation, there are some subtle tweaks as well. The fonts now use a thicker weight and are a blue color as opposed to the light grey they used previously. The increased contrast makes text a lot easier to read. This blue color is also used for the navigation buttons at the bottom. The only other tweaks I've noticed is the green bar indication which section you're in being moved from above the navigation buttons to below, and the separation lines between conversations being removed, which is something Google has done with their other applications as they redesigned them to follow the Material Design guidelines. 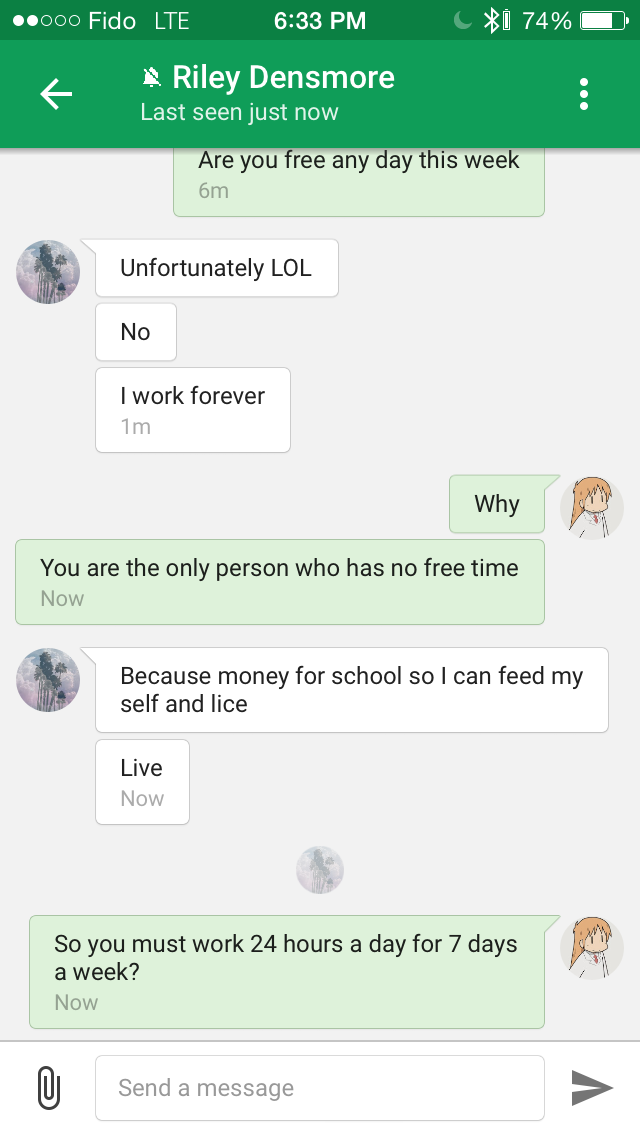 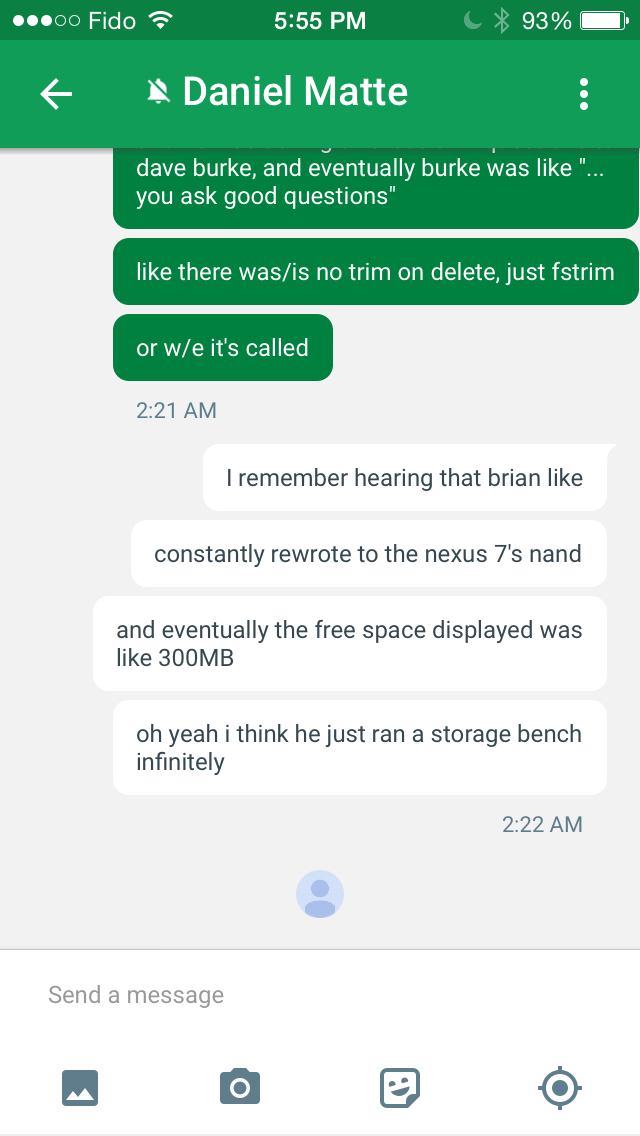 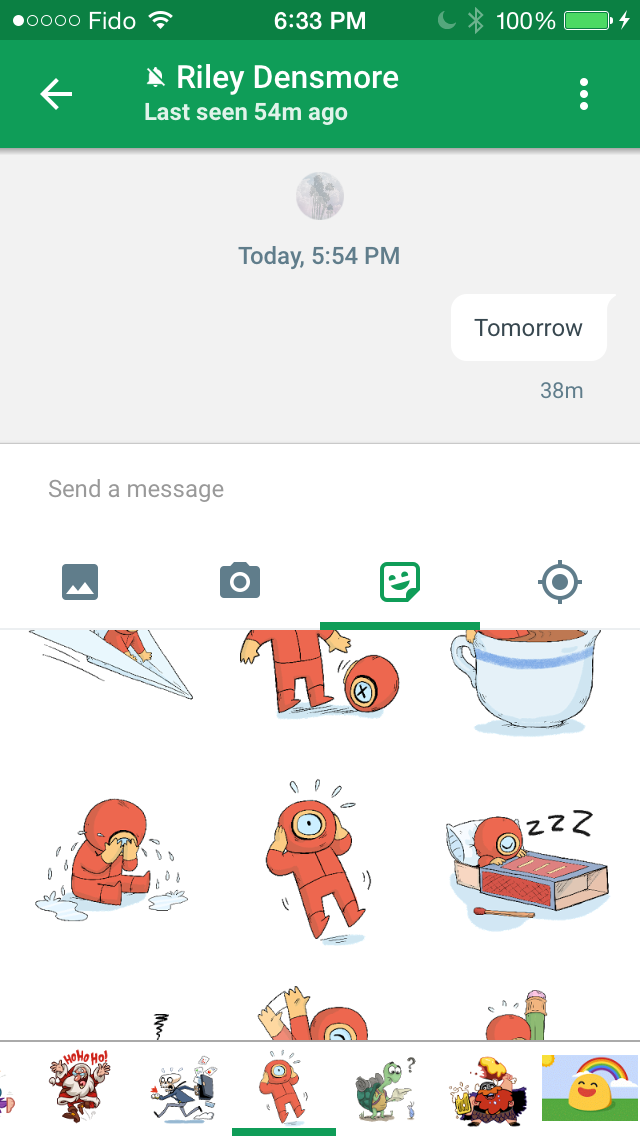 Old UI on the left, new UI in the middle and on the right

Once you go into a conversation you'll see that Google has been doing a lot of work to update the appearance of the app. The green color of the bubbles now better fits with the green color that Hangouts uses, and now the green bubbles are the ones sent by your conversation partner rather than by you. The bubbles themselves are also more rounded than they were before. Text within the white bubbles doesn't use the same blue used for the text in the conversation view, but it seems to be a lighter color than the black used before because there's visibly lower contrast between it and the white backgrounds. Text within the green bubbles now uses a white color to contrast with the dark text in the white bubbles.

The input field also receives a number of changes. Rather than having a paperclip that leads to another menu, Google has exposed all the options for sending media right underneath the text box. This means that you don't fit quite as many messages on the screen as before, but I think it's a worthwhile change. You can now send images, take images to send, and send various little pictures to the person you're conversing with. Location sharing is supported as well, and the photos button allows you to send multiple photos at once.

Hangouts 4.0 for iOS is rolling out on the App Store, and you should be able to download it now for any iPhones, iPads or iPod Touches that you own. The new interface hasn't come to Android yet, but there have been recent leaks of a similar looking redesign on Android, and Google says that it will be coming soon.