With the introduction of Broadwell-U earlier this year, we have seen yet another step up in battery life on notebooks. It does not all come down to the CPU though, although having one that draws plenty of power while doing nothing is certainly not beneficial. Display technology is also a big factor, and we have seen quite strongly that the higher resolution panels can certainly struggle for battery life compared to more average resolution displays. If a device is to have truly great battery life, every single component needs to be sorted out, because any single one drawing extra power can have a significant effect on the overall battery life. The other factor of course is battery size, and the X1 Carbon has a 50 Wh battery.

To test battery life on notebooks, we have two tests. Our light workload consists of browsing four pages every minute with the display set to 200 nits. The heavy test gets a lot of the other components into the mix. The web browsing is increased to about twenty pages per minute, a video is played, and a 1 MB/s download is done to keep the wireless active. 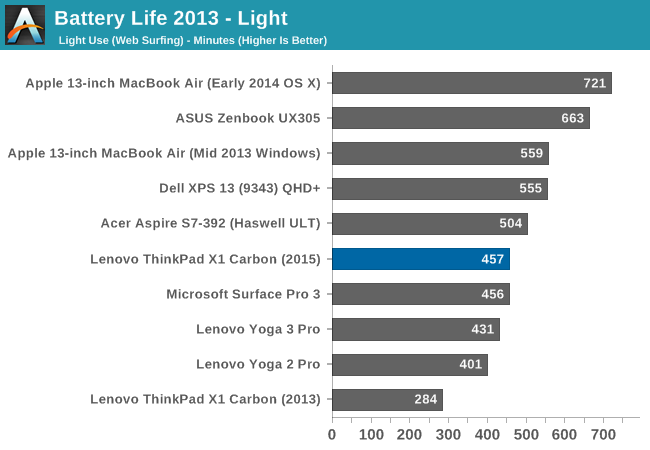 On our light test, the X1 Carbon is well off of the leaders in this test. It does seem odd to say that almost eight hours of battery life is not enough, but the bar has been raised this year. The X1 Carbon does have a slightly smaller battery, but as we will see in a bit that is not the reason for the lower than average result. A lot of this can likely come down to the display. In order to hit 200 nits, the display had to be set at 92% brightness which is quite a bit higher than most devices. Since this test is generally affected more by display power draw than any other, I would tend to think that this display is not the most efficient out there. It is always a bit of a guess though, since we cannot directly measure the power of each component. 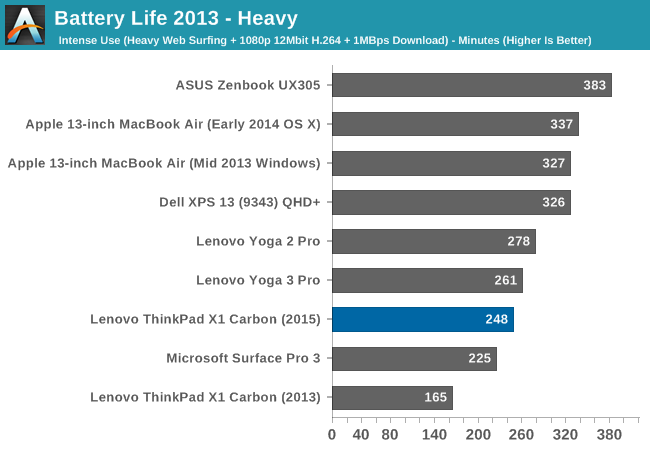 In the heavy test, the X1 Carbon falls even farther as the more efficient devices move past it. One thing to highlight from this test is the 2013 X1 Carbon. That was just two years ago, and battery life has skyrocketed since then.

Next we have our normalized graphs which show the amount of battery life divided by the size of the battery in order to judge how efficient each device is. 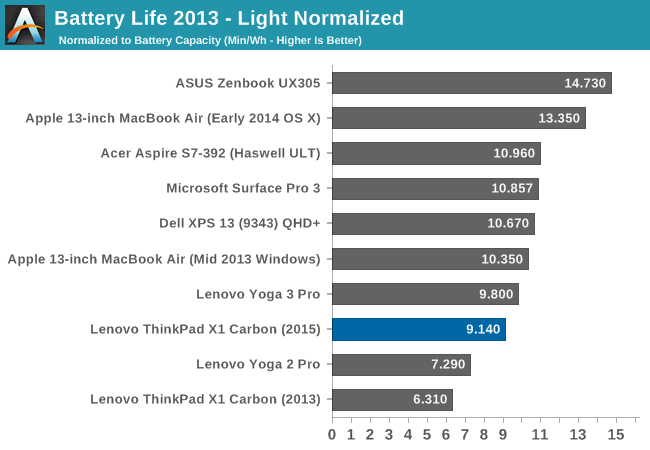 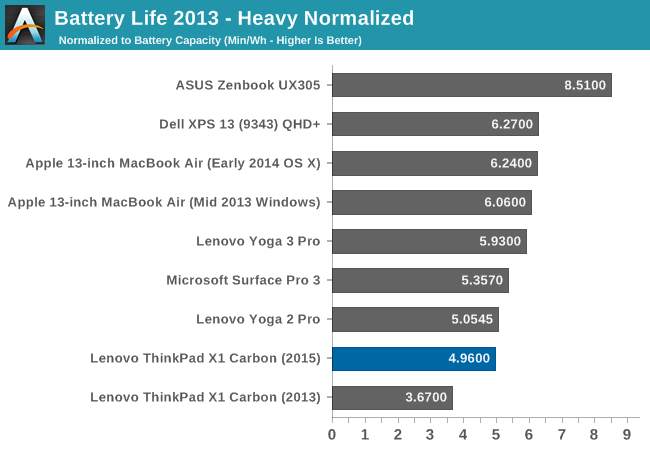 The light result shows that the X1 Carbon is not that much less efficient than some of the competition, but it also has one of the smallest batteries at 50 Wh despite this being a 14-inch notebook. Dell squeezed a 52 Wh battery into the XPS 13 this year despite the much smaller dimensions facilitated by the small display bezels. The heavy graph has an even worse result. Battery life is not the forte of the X1 Carbon. Even though it is not the battery life winner, taking a look at the Ivy Bridge powered X1 Carbon for 2013’s score really underlines the big gains seen in efficiency. Just two years ago, the X1 Carbon was about mid-pack in efficiency (see our review here) and just two years later the new X1 Carbon is almost 45% more efficient than the 2013 model, and yet it is almost at the bottom of our Ultrabook chart for battery life.

The X1 Carbon sports Lenovo’s Rapid Charge technology which will let you charge 80% of the battery capacity in just 30 minutes. Lenovo says that they use high current rather than high voltage to increase the battery charge rate, which they claim helps battery longevity. Whichever it is, the X1 Carbon does offer some pretty fast charging. 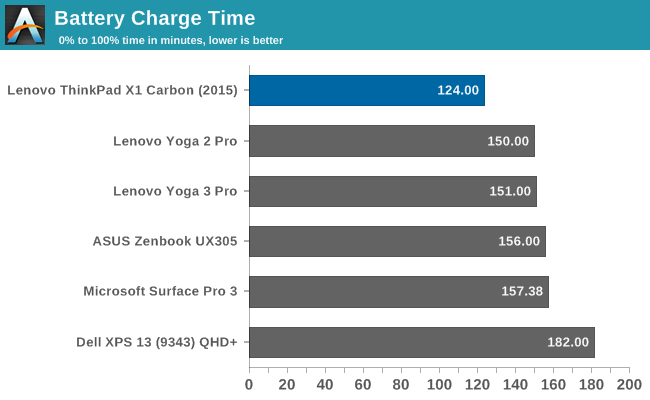 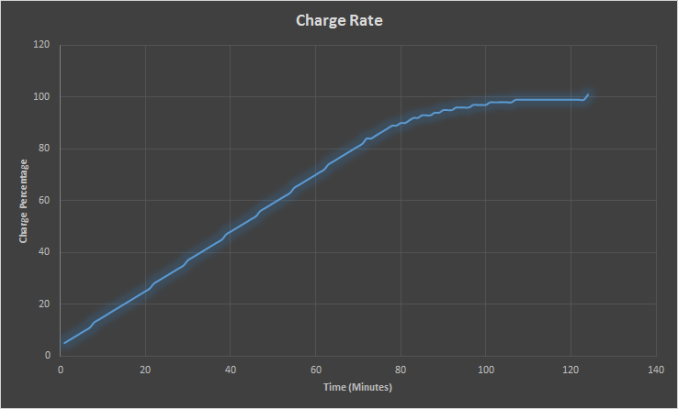 With the included 45 watt adapter, I was unable to reach the 80% in 30 minutes, but with the higher output adapters it could happen. Even with just the 45 watt model 80% happened in just 69 minutes which is very impressive, and a full charge took just over two hours. The battery life may not be at the top of the charts, but luckily if you do drain the battery you can get it back to a reasonable level in not too long.