Lenovo offers two display choices in the X1 Carbon, with a 1920x1080 model as the base option, and a 2560x1440 available with or without touch. While the resolution of the base panel is fine, the fact that it is a TN panel is not, so I would avoid that if at all possible. Thankfully the step up to the higher resolution model for $150 also gets you an IPS panel. With many devices that I see, there are some questionable decisions made, and I think the TN panel on a $1000+ Ultrabook is the one on this device. 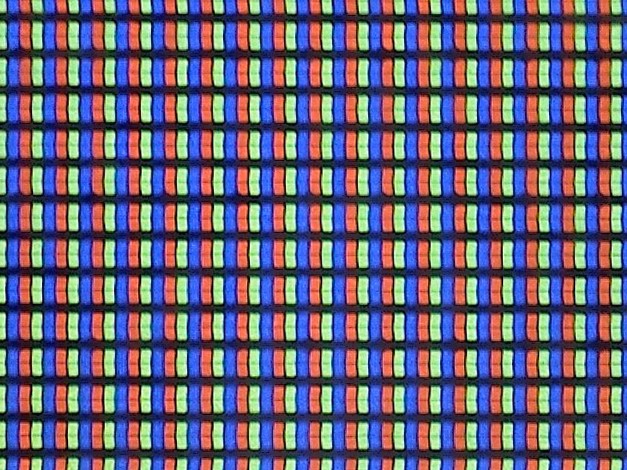 Luckily Lenovo shipped the IPS panel for review. It is a 14-inch panel with a full RGB stripe. In the hardware ID the panel is just labeled as Lenovo, so I can’t say for sure who makes this panel. This model also has the touch digitizer. Despite that, it has almost a matte coating applied to it, or at least the anti-reflective coating is quite effective. This display also came with a built in ICC profile, so it was tested with that ICC being used.

To test the display characteristics, we use SpectraCal's CalMAN 5 suite along with the X-Rite i1Display Pro colorimeter for brightness and contrast readings, and the X-Rite i1Pro spectrophotometer for color accuracy testing. 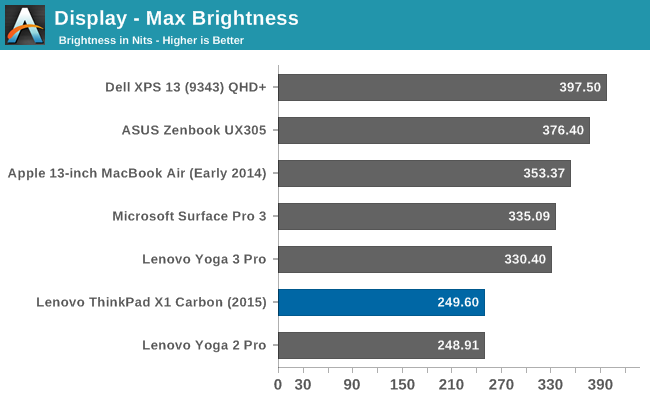 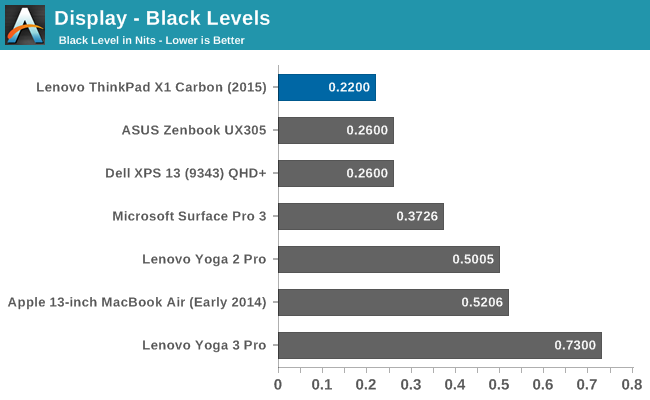 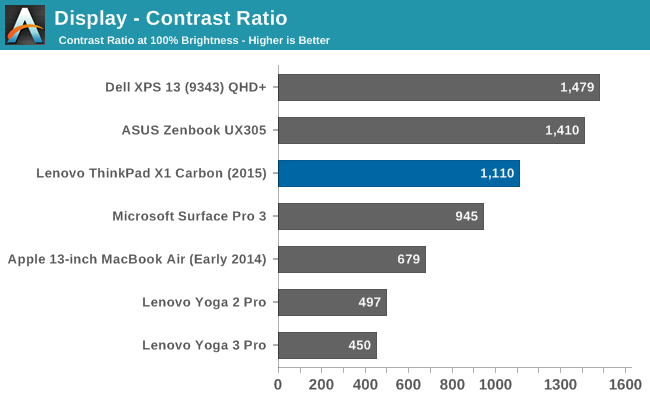 At 250 nits, the X1 Carbon does not get as bright as much of the competition. In fact, to do the color calibration steps, we set the display to 200 nits which is 92% in the power settings of this device. However black levels are quite good, so the overall contrast ratio is still a respectable 1100:1. 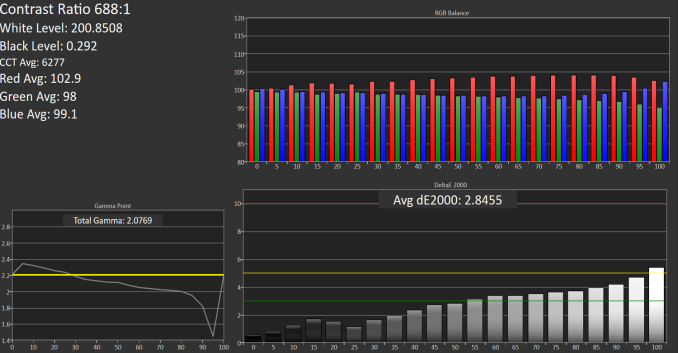 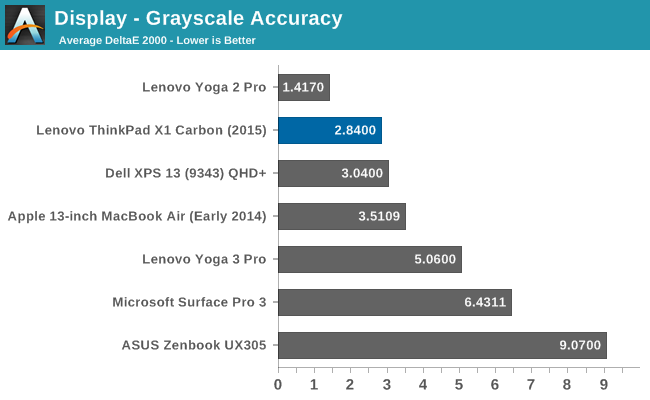 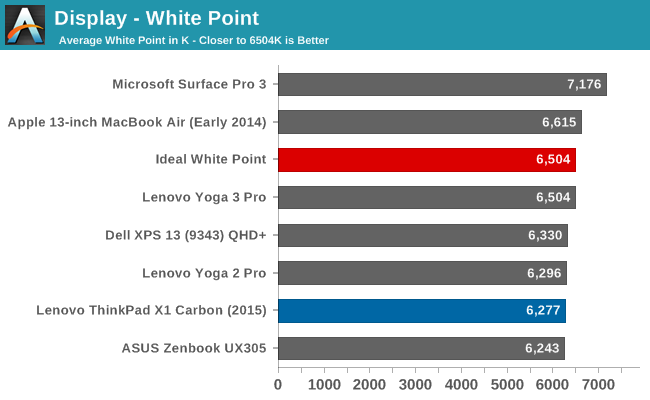 With an average score under three, the grayscale on the X1 Carbon is quite good. The errors do get a bit higher though as the brightness increases, and 100% white actually has a dE of over 5. Gamma drops down quite a bit at the higher brightness levels, and the overall gamma is just 2.0, and the target is 2.2. 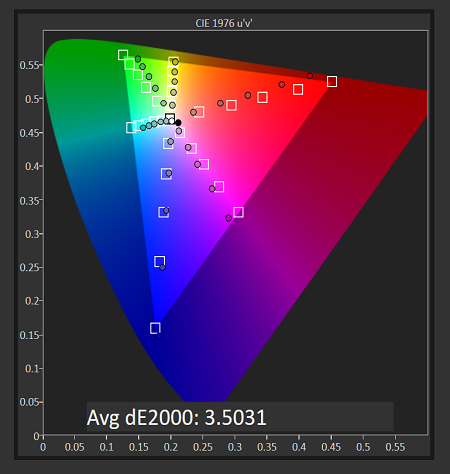 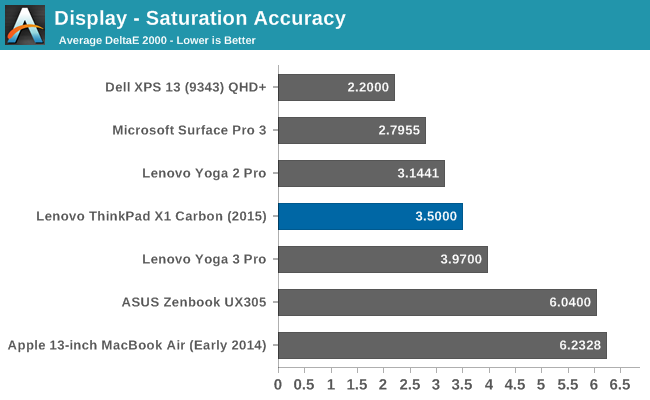 Saturation accuracy was decent on this display with an overall error level of 3.5, as an average over all of the readings. It is not the best display, but it is far from the worst. It is really the reds that drift off the most. 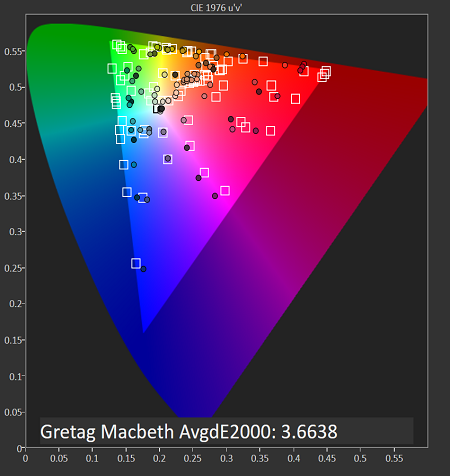 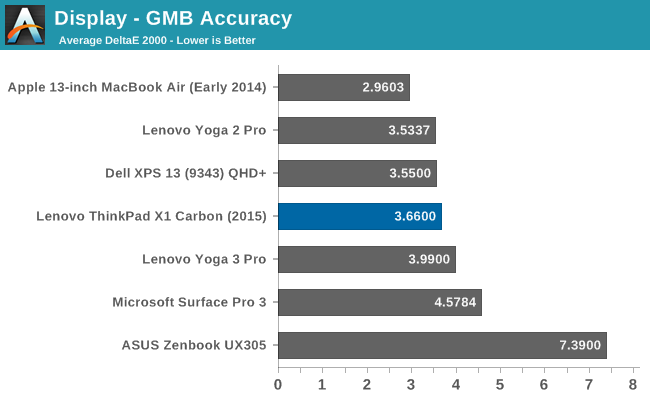 The Gretag Macbeth is the most comprehensive of the tests, and it tests quite a few colors including a lot of the flesh tones. The overall score is once again a good, but not great result, at 3.66.

The overall display is really just average, with no really standout features. The brightness is a bit low, but the contrast is good. Colors are off, but not dramatically. Out of curiosity, I also tested the display without the ICC profile as well, and surprisingly it did not have much of a change in the results. When a generic ICC profile is used, it can’t take into account variability in the individual panels.

Generally ICC profiles are the most help to grayscale, so I ran through our calibration to see how much we could improve the panel.

The grayscale sees a significant improvement, with a dE2000 of just 0.454 and gamma is almost spot on a 2.2. This is what calibration should do, so it was great to see the improvement. Unfortunately this only had a mild effect on the color related scores. Without a 3D LUT, there is only so much you can do.

One other thing that I need to mention about the display is that, at least on the sample I received, there was a bit of a twinkle in the display, which was more noticeable on light colors like white. All displays have a bit of this due to the glue and coatings applied, but on the X1 Carbon it was a bit more noticeable than I was used to.

So overall the display is just OK. Back in 2013 when the X1 Carbon first launched, a display of this quality would have been quite welcomed, but as with all things, progress moves forward and expectations get higher with the competition.