Last but certainly not least in our look at the MacBook is a look at its battery life and WiFi performance.

Along with the technical considerations that have gone into making the MacBook as small as it is, I would consider the subject of battery life to be the second most interesting aspect of the MacBook’s design. For on the one hand, the CPU at the heart of this laptop is Core M, a very low power CPU specifically designed for thin & light devices, which on its own doesn’t draw all that much power. On the other hand in constructing the MacBook Apple has ditched the MacBook Air’s standard DPI TN panels for high DPI Retina IPS panels. As we’ve seen in other Apple products in the past, going Retina incurs a significant power cost, as the high DPI displays require a much stronger, much more power hungry backlight to light up the display. Apple needs only to pay this cost once, but it’s an expensive cost.

All the while Apple also has to deal with the battery capacity limits of such a small chassis. Using terraced batteries has allowed Apple to maximize the amount of volume the MacBook’s batteries occupy, however at 39.7Wh this only gets them up to roughly where the 11” MBA (38Wh) already sat. The end result is that relative to the 11” MacBook Air Apple has virtually the same battery capacity to drive a less power-hungry CPU and logic board paired with a more power-hungry display.

Officially the MacBook should be able to hit 9 hours of runtime on a light web workload, and 10 hours with video playback. This happens to be identical to what the 11” MacBook Air is rated for, and in practice would be very close to what the Haswell-based 11” Airs hit as well.

Meanwhile to test battery life, we have two workloads. Our light test is light web browsing, and our heavy test increases the number of pages loaded, adds a 1 MB/s file download, and has a movie playing. We set all displays to 200 nits. 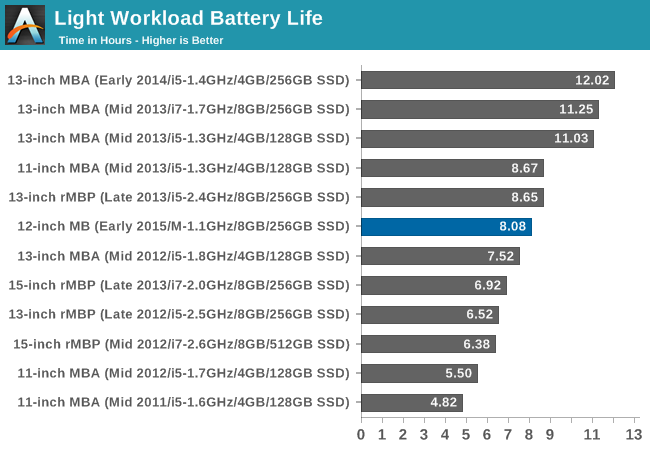 In practice what we find is that by our testing methodologies the MacBook falls about an hour short, clocking in at 8 hours and 5 minutes. The difference in battery life most likely comes down to differences in how we test; Apple bases their estimates on 75% display brightness, whereas we test at 200 nits, which in the case of the MacBook is around 85% brightness. If we turned our brightness down to 75% I suspect our results would come very close to Apple’s, at the cost of dropping below 200 nits of brightness.

Even by our own testing standards, the MacBook’s battery life is enough to get the laptop through an entire work day (8 hours) – if only just – so while we can’t hit 9 hours at our preferred brightness Apple isn’t in too poor of a position for such a small laptop. In practice what this means is that the MacBook does just a bit worse than the 11” MacBook Air, essentially falling behind by 40 minutes of runtime. However given the fact that the MacBook is also physically smaller than the 11” Air, this is not an unexpected tradeoff.

Putting things in a bit larger perspective, thanks to Intel’s massive energy efficiency gains from Haswell in 2013, the MacBook looks very good compared to the older 2011/2012 11” MacBook Air models. From a battery life perspective the new MacBook easily exceeds those models, is physically smaller than those models, and all the while delivers performance that at worst is equivalent and at best better than those models. Put another way, Apple has been able to hold performance constant while bringing down both the size and greatly improving the battery life.

However if you want better than 8 hours on a light workload, then even the MacBook is no substitute for a larger laptop with a bigger battery. There’s only so much that can be done on 39.7Wh, and as a result the 13” MacBook Air will remain unmatched as Apple’s long-haul Ultrabook. 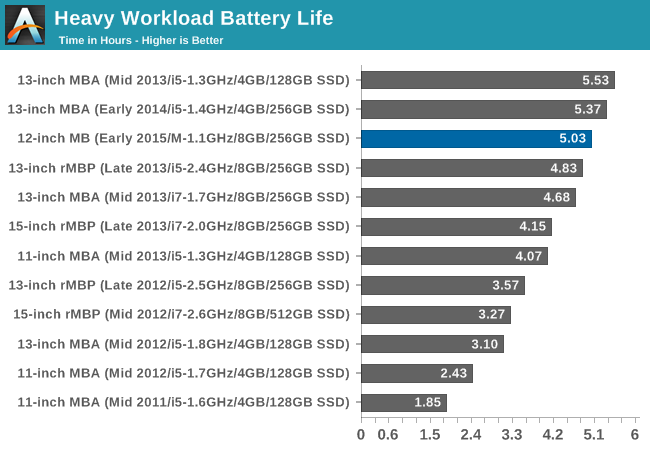 Meanwhile with a heavy workload the MacBook’s fortunes improve. No longer just in the middle of the pack, at 5 hours and change it’s offering runtimes close behind the 13” MacBook Airs. This shift in relative performance is not unexpected, and is closely tied to the balance between CPU power consumption and display power consumption. Compared to the light workload, the heavy workload requires that the CPU draw quite a bit more power all the while the amount of power drawn by the display is virtually unchanged. As a result the higher powered MacBook Airs see a big step up in their power requirements, while the Core M equipped MacBook sees a smaller step up. 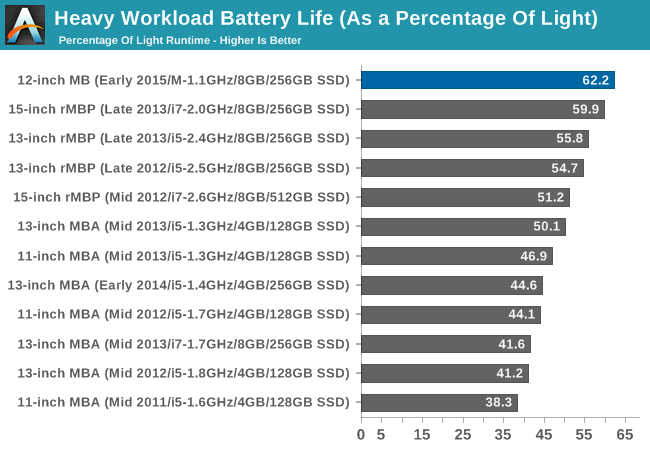 In fact if you look at heavy workload runtime as a percentage of light workload runtime, the 2015 MacBook has the smallest drop in runtime out of all of the MacBooks. Apple’s latest laptop gets 62.2% of its light runtime under the heavy workload, compared to 50.1% for the best MacBook Air. The only thing with a similarly small decrease are the Retina MacBook Pros, whose large, Retina displays result in a similar situation.

Somewhat paradoxically then, the MacBook looks best under a heavy workload, even though its processor is relatively slow. Ultimately this is more an intellectual curiosity than anything else, but it’s a great example of how the MacBook’s component selection has resulted in a much different power consumption balance between the display and CPU than what we’ve seen on the MacBook Airs and similar Ultrabooks. If the display isn’t the single biggest power draw on the MacBook, it’s certainly going to be a close second.

Our final benchmark is a quick glance at WiFi performance. The MacBook ships with a Broadcom 2x2:2 802.11ac solution, which means that in theory it is capable of delivering up to 833Mbps.

For our WiFi benchmark we copy a large file from a Gigabit Ethernet connected SMB file server, timing how long it takes to transfer the complete file and calculating the average. All laptops are placed within a few feet of the router to maximize their achievable bandwidth and minimize interference. For the MacBook we’ve gone ahead and run this test under both Windows and OS X, to showcase any performance differences between the two OSes. 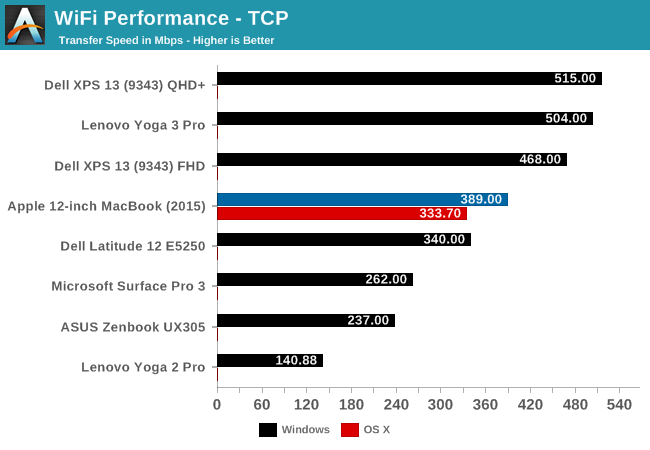 Under Windows the MacBook hits 389Mbps, about 47% of its theoretical maximum performance. Compared to other Windows laptops this is a mixed bag, with some laptops able to hit as high as 500Mbps, and others coming up much shorter. In the case of the MacBook I suspect the all-aluminum chassis is not doing it any favors. Meanwhile performance under OS X is a bit worse at 333.7Mbps, most likely due to OS X’s less extensively optimized SMB support.

While I imagine it’s impractical from a design perspective, given the fact that the MacBook only has a single USB port, I would have liked to see a 3x3:3 solution for the MacBook to allow it to achieve better WiFi performance. Even 3x3 solutions seldom keep up with GigE in the real world, but the MacBook certainly has the SSD and processing power to handle faster speeds than what we’re seeing here.