Shifting gears from OS X, let’s take a look at performance under Windows. Though not every MacBook will be used with Windows, Windows gives us a wider selection of benchmarks to work with, and it gives us a chance to compare the MacBook to some contemporary PCs.

For our Windows comparison I’ve pulled in a number of results from our most recent Core M review, including other Core M laptops, the Haswell-U powered Surface Pro 3, and a couple of Broadwell-U powered laptops. Of particular interest is likely the Asus UX305, which is another Core M based laptop that uses a very similar build. At 13.3” it’s larger than the MacBook, but it is a similar aluminum fanless design. 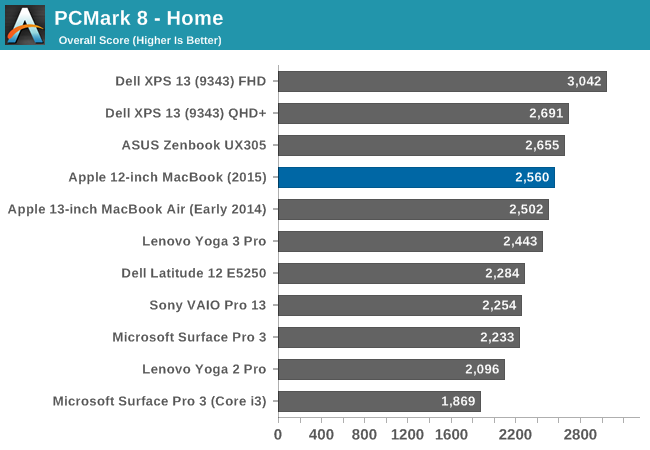 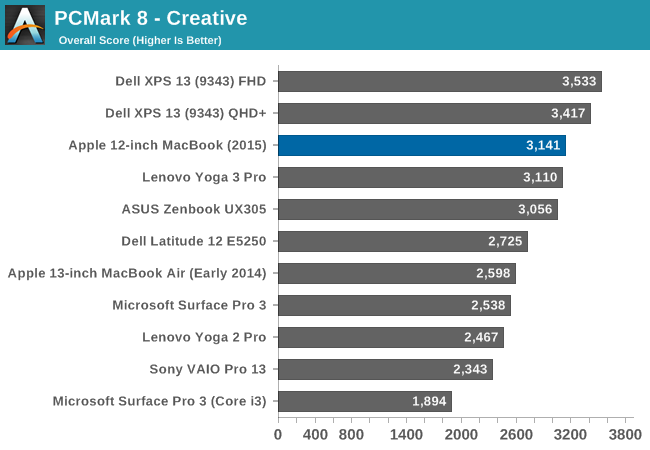 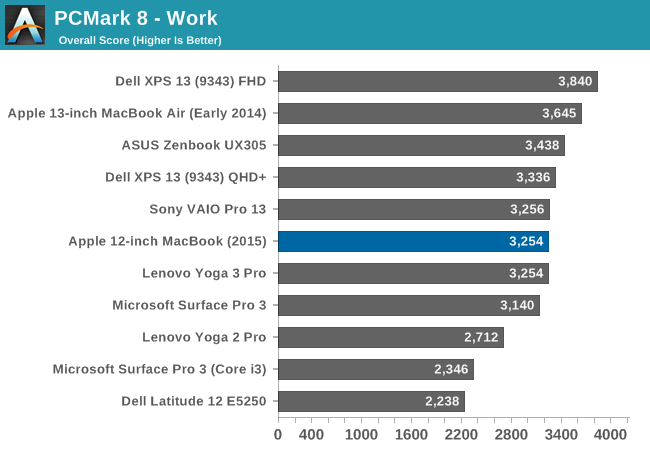 Depending on which sub-test we’re looking at, the PCMark workloads are a mix of bursty workloads, lightly threaded workloads, and heavily threaded workloads. As a result the MacBook and its Core M processor are given some opportunity to show off, and at other times is pushed back due to its cap on sustained performance.

The Home workload is one such light test, which plays into the MacBook’s favor. Here it’s towards the top of the charts, surpassing everything other than the Core M based Asus UX305, and then the more powerful Broadwell-U based Dell XPS 13s. I keep rattling on about workload types and this is a good example of why it matters, because in a light workload the MacBook is among the fastest of the ultra-portables, beating out many other Core M devices and also some Haswell based Ultrabooks. Put another way, in a light workload Core M can already deliver (and at times exceed) one-generation old Haswell Ultrabooks.

As for the Creative and Work workloads, the MacBook still places relatively well. Doing this well on the Creative workload was a bit of a surprise, since it’s the most demanding benchmark of the 3. I suspect we may be seeing a mix of dividends from the SSD and Core M’s GPU, Otherwise the lighter Work test actually has the MacBook farther behind the pack, with performance in-line with other Core M laptops, though not as exciting compared to the Ultrabooks.

Overall, between our OS X and Windows CPU benchmarks, what we’re finding is that the performance of the MacBook generally mirrors our expectations given what we know about its design and component selection. Given a light workload that allows the Core M CPU inside of the MacBook to turbo to its fastest speeds, it’s a very potent competitor in a small package, able to give all but the most recent Ultrabooks a run for their money. However heavier, sustained workloads drive a wider gap in between the two classes of devices, and in those cases the MacBook offers performance closer to Ultrabooks a 3-4 years old.

Shifting gears one more time, let’s take a look at GPU performance. GPU workloads present an interesting scenario for Core M, and by extension the MacBook. The underlying Intel HD Graphics 5300 GPU is a GT2 configuration, making it moderately powerful for an iGPU, however the power and thermal constrains on the MacBook means that the laptop doesn’t have the power required to run a GT2 GPU at full speed.

With the Broadwell CPU cores alone able to chew up 4.5W and then-some, a combined GPU+CPU workload will generally put the MacBook in a pinch. Consequently I don’t see the MacBook being used as any kind of gaming machine – the MacBook Air is undoubtedly a much stronger contender – but it’s useful to put this performance in context. 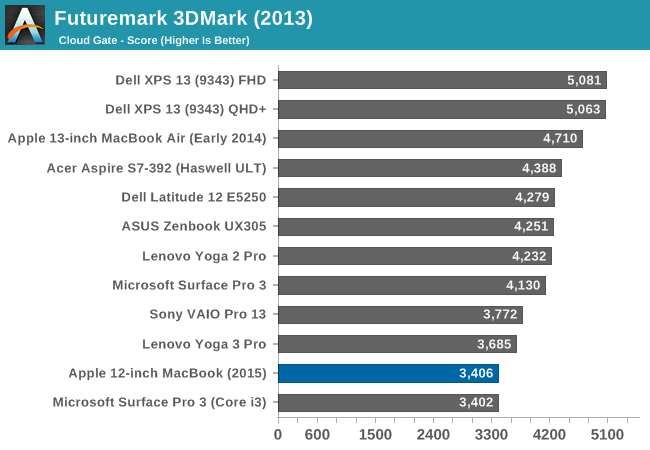 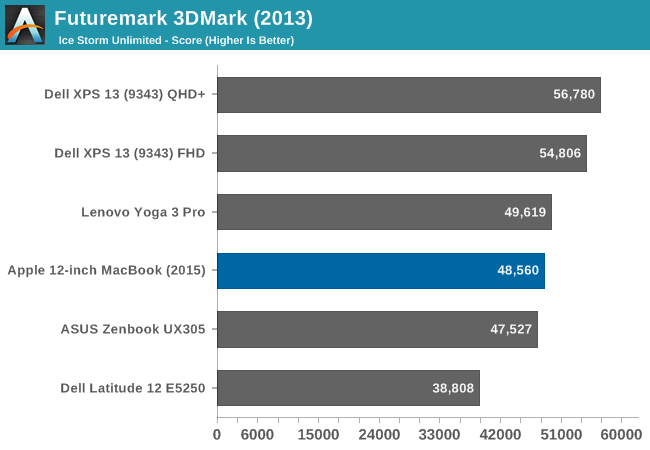 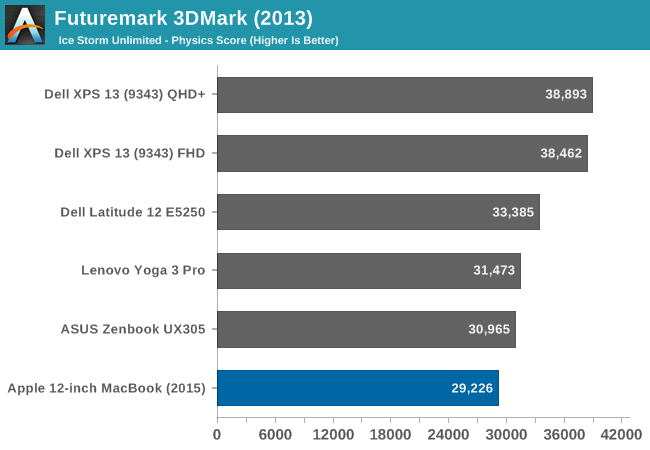 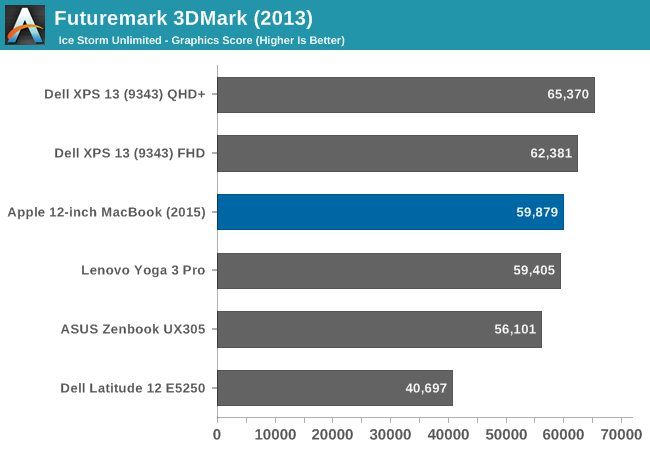 Our 3DMark scores handily illustrate this exact point. Facing significant power and thermal limits, the MacBook has to pull back in performance and consequently ends up near the bottom of our charts, versus its much better showing in PCMark. The 2014 MacBook Air 13” is some 38% faster at Cloud Gate, and on the newer Ice Storm benchmark the results aren’t much better. Of the two it’s worth noting that Cloud Gate is a much more complex and longer running benchmark, whereas Ice Storm is a quick running tablet-sized benchmark. Consequently Cloud Gate throttles harder and sooner, which is why the MacBook does relatively worse there. Overall the MacBook doesn’t even beat any of the other Core M laptops, which is a bit surprising. But nothing here is quite like the MacBook, so it’s somewhat different in its combination of small size and aluminum chassis. 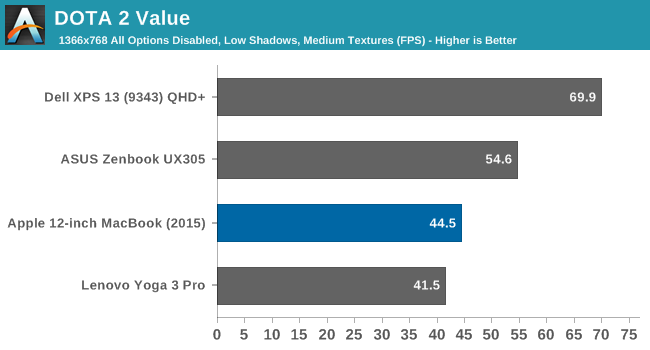 Meanwhile I have also run our DOTA 2 Value benchmark against our other Core M devices and the Broadwell-U based Dell XPS 13 for good measure. On an absolute basis 44.5fps is definitely playable for a game like DOTA, however on a relative basis this is a weaker showing than the UX305, not to mention the XPS 13. Compared to the UX305 the MacBook again appears to be throttling sooner and harder, whereas the Ultrabook-sized XPS takes full advantage of its higher power limits and better cooling.

Ultimately as we said when opening up our look at GPU performance, the MacBook’s GPU is potent on paper, but it simply doesn’t have the power and cooling capabilities needed to take full advantage of it. This means that while CPU performance isn’t too far removed from the Ultrabooks, GPU performance absolutely is.

Finally, I wanted to take one last look at performance relative to the tablets, this time from a GPU perspective. 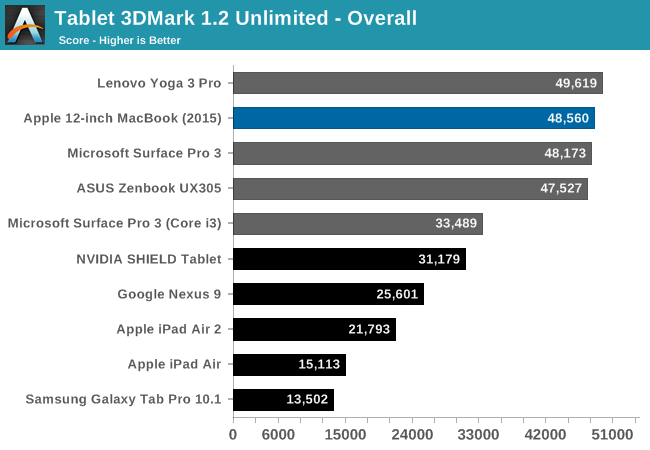 While the iPad Air 2 makes a good run on the MacBook in the web benchmarks, it and the other tablets are even more power limited than the MacBook, and as a result their GPU performance is even more constrained. The MacBook still has a better than 2x lead on the iPad Air 2 in this GPU benchmark, so judging from this it will be some time yet until an iPad's GPU performance catches up with this MacBook's.