Although using the same capture and video encoding chip as its predecessor, the AIW Radeon 8500DV offered a number of compelling options to users. 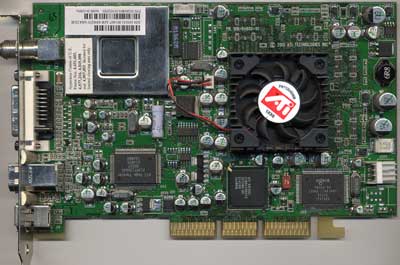 As its name implies, the 8500DV offered inputs specifically for digital video cameras giving ATI the ability to call it a true digital video editing solution. The inputs themselves are nothing more than two Firewire ports (IEEE-1394) and can support more than just DV cameras. The ports being located on the card itself doesn't cost ATI much to implement and gives them a good marketing edge over the competition by being able to claim true DV capabilities. In reality the DV suffix means nothing more than saving you money and a PCI slot by not needing a PCI Firewire card for your DV camera. If you have no need for the DV ports then this feature has little meaning to you. One Firewire port is present on the card itself, the other is present on the dongle, both of which are powered by a 4-pin power connector present on the card itself. All you have to do is plug in a floppy power connector and you'll be good to go.

The 2nd Firewire port is located on this dongle

There are a number of chips that crowd the 8500DV's PCB including the Rage Theater encoding chip (the same one that's on the original AIW Radeon), an ATI AGP Bridge chip (to enable Firewire support on the AGP card), an Agere (Lucent) IEEE-1394/Firewire controller and a Micronas chip for handling audio coming in from the coaxial TV tuner input. 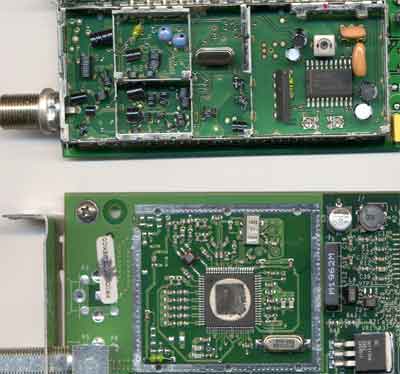 There is an additional piece of silicon on the board that is contained within a bit of metal shielding. While the vast majority of TV tuners are analog based meaning they use analog components such as resistors, inductors and capacitors to create band-pass filters that allow certain frequencies to pass through thus "tuning" to those channels, the AIW Radeon 8500DV implements virtually all of those analog components into a single piece of silicon. This gives the 8500DV a digital TV tuner (this doesn't mean it can receive HDTV channels, it just means it uses digital circuitry instead of analog) which in theory can offer better quality as a result of decreased interference and faster tuning. The quality argument is generally one that isn't noticeable because of the poor quality of cable TV however on an extremely high quality cable TV feeds you may notice a quality improvement courtesy of the silicon based tuner. While it also gives you faster tuning abilities (meaning you can surf as fast as humanly possible), ATI has always had relatively fast TV tuners on their cards, including their analog tuners.