When the first AIW Radeon came out we praised it for offering the highest performance we'd ever seen from a card that offered so many video features. Unfortunately ATI was late to the game in offering proper Windows 2000 support for the card and many users were left with a very buggy version of ATI's Multimedia Center. 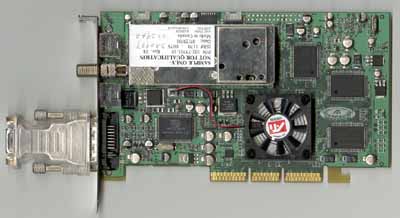 The card itself is pretty basic; a single analog TV tuner accepts a coaxial input from a cable line/box or antenna. Other than those chips belonging to the power circuitry, the only other major chips on the board are the Radeon GPU, 32MB of DDR SDRAM, and ATI's Rage Theater chip.

The Rage Theater is ATI's custom video output and video capture chip. The chip itself hasn't actually changed and is still used on the more up to date AIW Radeon cards as well. The chip is due for a refresh soon but we probably won't see its debut until the next incarnation of the AIW based on a derivative of the R300 core.

We'll limit discussion about the hardware/software features and shortcomings of the AIW Radeon here as they are identical to what we have to say about the other two AIW Radeon cards. These cards all share the same drivers and software package thus giving them all the same pros and cons. If you currently have an AIW Radeon then the only reason to upgrade to a newer model would be to get improved gaming performance. Remember that this card only came clocked at 166/166MHz from ATI, almost 10% slower (core and memory) than the retail Radeon DDR boards.