The AIW 8500DV is based on a noticeably lower clocked version of the retail Radeon 8500 card. The board runs its core at 230MHz, slower than even the Radeon 8500LE and its 64MB of DDR SGRAM runs at 190MHz DDR, almost 25% slower than the 8500LE's memory. As you can tell, although this is a high-performing solution it is definitely not intended for the hardcore gamer (ATI addressed this market with the AIW Radeon 8500 128MB). Because the entire front of the PCB is taken up by the GPU, TV tuner, Rage Theater, AGP bridge, and Firewire controller chips all of the memory is present on the back of the board along with the Micronas sound processor. Because of a lack of PCB space ATI had to move to high-density 128Mbit DDR SGRAM devices which at the time of the original release of the 8500DV was still pretty rare.

Although it was released after NVIDIA's Personal Cinema it's clear that ATI had been working on a remote control for their hardware for much longer. The AIW Radeon 8500DV was the first to introduce ATI's RF remote control which is now available separately as ATI's Remote Wonder product. The receiver is a small USB device that can be simply left hanging from your PC; since the remote uses radio frequency to communicate with the transmitter it doesn't need a line of sight to work and thus you can even control the system from a different room. The range on the remote is around 30 - 50 feet.

The remote is considerably larger than NVIDIA's Personal Cinema remote and it's about the size of most home theater receiver remotes but without all of the buttons. The buttons all have good tactile feel and are comfortable to use. You can control virtually all of the features you could ever want using the remote and it even has the ability to move your mouse around and click the left/right buttons all from the remote. The power button on the remote acts as an ALT-F4 macro that will automatically close the foreground window regardless of whether it's an ATI application or not. You can set the software to either prompt you before closing a window using the power button or allow you to do it without a prompt. 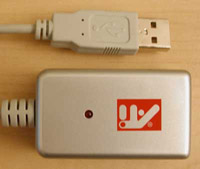 There are 6 programmable buttons on the remote but unfortunately you can't set them to just any keystroke combination, only those functions and keystrokes that are predefined in the software setup. This is a shame as the remote could really use a button to automatically click Ok/Cancel or Yes/No when dialog boxes pop up, instead of having to navigate to the proper button and hit the left mouse button on the remote. The directional pad could use an indentation in the center to give you better grip while using it to navigate your mouse around. It was a suggestion we gave to ATI when we first previewed the 8500DV but it looks like it went unheard.

In spite of the vast superiority of ATI's EPG (which we'll talk about later), just as was the case with NVIDIA's remote there are no EGP functions built into the remote which is also a disappointment as it would make recording all that much easier.