Moving from a standard DDR3-2133 C11 kit to DDR4-2133 C15, just by looking at the numbers, feels like a downgrade despite what the rest of the system is. Ideally we want the first number, the frequency, to be high and the second number, the latency, to be low. After spending several years dealing with DDR3, moving to DDR4 feels a bit of a backwards step when you look at solely the numbers on paper.

As part of this review we have covered many different areas where DDR4 is the upgrade of DDR3, not only in terms of voltage but some of the underlying concepts as well. This puts DDR4 in a position for upgradability in the future, especially when it comes to density and future technologies (see the next page for more information). But an ultimate question still remains: at the same frequency and latency, do they perform the same?

The only way to perform an identical comparison would be to have a platform that could probe both DDR3 and DDR4 while keeping the same CPU. If one comes along, we will test that, but in the mean time we can do some broad comparisons with near-identical systems.

For this test we took two Haswell based systems and compared them against each other. The first contains the Haswell-E i7-5960X processor, cut it down to run at four cores with no HyperThreading, fixed the CPU speed at 4 GHz and placed the memory into DDR4-2133 14-14-14 350 2T timings. We did the same with the second system, a Haswell based i7-4770K moved it to 4 GHz and making sure it was in 4C/4T mode. The OS was placed into a unique high performance profile and we ran our test suite. The only difference that remained between the two setups was the L2 and L3 cache, which we cannot change unfortunately. 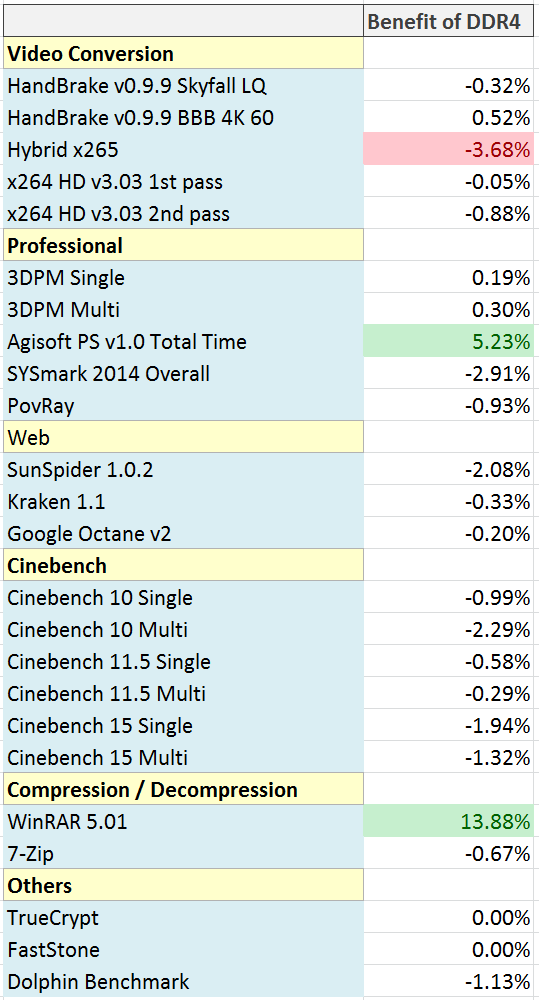 In our non-gaming tests, there is one situation where DDR3 is more than 3% better and two where DDR4 is +3%. It is worth noting that most of the numbers, especially with things like the Web and Cinebench are actually slightly negative. 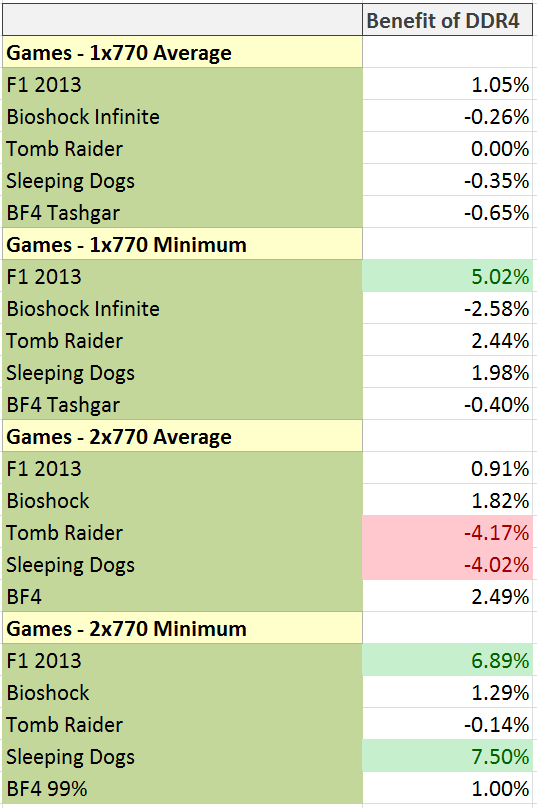 In the gaming tests, similarly there are more +3% on the side of DDR4. If we do a direct comparison regardless of the percentage, DDR4 wins 11 times compared to DDR3 getting 8, and almost of DDR3’s wins are minor except for two-way SLI. It would seem that for two-way SLI DDR4 at least brings up some of the minimum frame rates.

Pulling out the >3% difference numbers, just to see what the numbers exactly are: 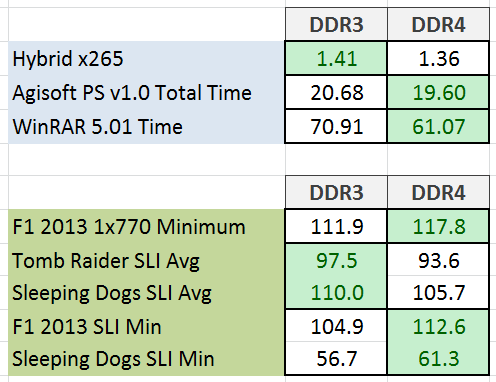 On the face of it, the Hybrid result does not seem that different, whereas a full minute on Photoscan or 10 seconds in our WinRAR test feels like a difference. In the gaming tests moving nearer to 120 FPS or 60 FPS, especially in both of the minimum frame rate tests, is an important jump which happens with DDR4.

Overall, comparing DDR4 to DDR3, there is little difference to separate the two. In a couple of small instances one is better than the other, but on those edge cases it might be prudent to say that we cannot make a final decision until we can synchronize the rest of the system, such as the size of CPU caches. When we can perform such tests, we will run some more numbers.