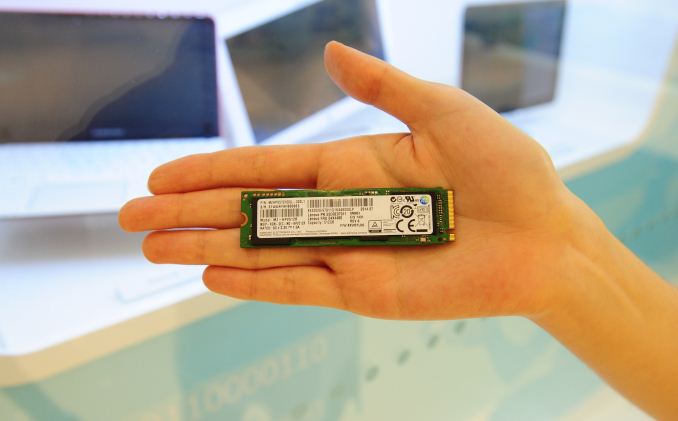 Back at Samsung SSD Global Summit in July, Samsung showed off the SM951 for the first time. The drive has then created a lot of interest because the Z97 and X99 chipsets finally brought proper boot support for the XP941 and many have decided to hold off their purchase and wait for the upcoming SM951.

In addition to increased performance, the SM951 also brings power savings. The drive includes support for L1.2 low power standby mode and according to Samsung the idle power consumption is under 2mW (i.e. within the DevSleep spec). The XP941, in turn, uses about 50mW as per Samsung's data sheet, so it's a fairly significant increase in power efficiency.

But now the bad news: the drive does not support NVMe nor does it come with 3D V-NAND. Back in July Samsung's own presentation mentioned that the SM951 would be the world's first client SSD with NVMe support, but those plans has then changed. Currently Samsung has no plans to bring NVMe to the SM951, which leads me to believe that the hardware is not NVMe compatible in the first place. Why that is the case, I don't know for sure, but what I do know is that the current Haswell/Broadwell platforms aren't really designed for PCIe/NVMe SSDs, which is why everyone is looking forward to Skylake before releasing their drives to the market. There are workarounds to get PCIe/NVMe SSDs to work on existing systems, but apparently Samsung decided to stay with AHCI for one more generation for increased compatibility (it's an OEM drive after all, so I'm sure the PC OEMs have had their say about NVMe).

As for the NAND, the SM951 uses 128Gbit 19nm MLC. That's planar NAND, unfortunately, even though Samsung has been adopting V-NAND to nearly all of its other SSDs. I suspect that the reason behind the choice of planar NAND is PC OEMs and their unwillingness to pay the premium for V-NAND because the truth is that V-NAND is still not as cost efficient as modern planar NAND. Another reason might be the newness of 3D NAND as PC OEMs tend to prefer proven technologies to maximize reliability.

Since the SM951 is an OEM drive, it won't be available through the usual retail channels, but at least RamCity (the first XP941 retailer) will be carrying the drive. Stock should arrive around March time and I've also heard that there will be a TLC based version called the PM951. All in all, while the SM951 didn't exactly meet my expectations on the specification frontier, I'm eagerly waiting for a review sample to see how the transition to PCIe 3.0 increases performance. We will be getting our review sample as soon as RamCity receives the first units, so look back for the review in about two months.