Looking at the HP Stream, the first thing that catches your attention is the brilliant Horizon Blue color scheme. There is also a model with Orchid Magenta as the base, and both of these colors really set the Stream apart from the myriad of black and grey laptops we have become accustomed to. The shell is all plastic (again, $199 price point) but the outside is not glossy and seems fairly resistant to fingerprints. The texture also makes you feel confident it will not slip out of your hands.

The top of the laptop features a bright chrome HP logo. The lid is fairly flexible, but opens and closes on a firm feeling hinge. The base of the laptop also has a bit of flex, but only a little. While not as solid feeling as something machined out of aluminum or other metals, the build quality of the Stream 11 is good.

The display bezels are large, which is not unexpected, but the plastic bezels are the same matte texture as the outside of the laptop so they do not show fingerprints. The original pictures of the 13” Stream model showed black bezels, and the contrast of colors offered a better look in my opinion, but for retail both the Stream 11 and Stream 13 stick with the single color. 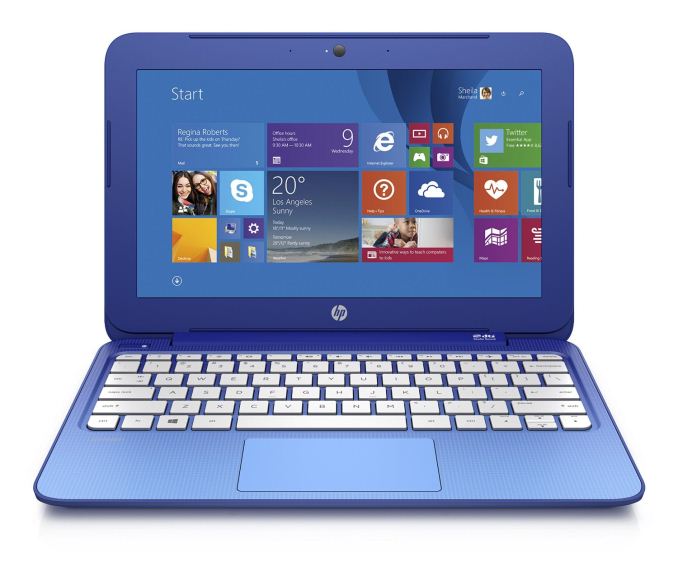 The expansion ports are fairly sparse, with only two USB ports that are both on the right side of the device. Only one of those is USB 3.0, and neither offer sleep charging for smartphones and other USB charged devices. HDMI is included however, which will make the Stream 11 easy to connect to an external monitor. If you prefer to wirelessly connect to a monitor, the Stream 11 also supports Miracast. On the left side of the device is the SD card slot, which is likely going to be required since the onboard storage is not very high. It would be nice if the SD card was completely flush because of this, but unfortunately the card sticks out slightly when clicked into place.

The keyboard is a strong point on the Stream 11. HP has crafted a keyboard that is 97% of a full sized keyboard. The Stream 11 is also not ultrabook thin, allowing the keys to have good travel. Spacing is good between the keys, and unlike some notebooks, the keyboard layout is pretty much standard. The up/down keys are half keys stacked on top of each other and since they are used so much, it would be nice if they were full size, but the bevel between the keys makes it fairly easy to use both. The one downside to the keyboard is that, at least in the unit I received, there is a bit of vibration in the space key that can make it vibrate/wobble when you are typing. Expectations need to be lower for this price point, but this can get annoying when typing at a good clip. Still, overall the keyboard is good and I had no issues with it. 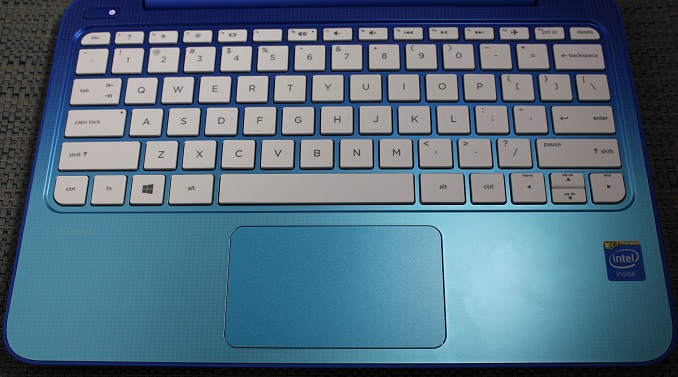 Another nice feature of the keyboard area is the micro dot color fading effect that is on the device. There is a gradient that starts with the Horizon Blue at the top of the keyboard and fades into a lighter blue by the front edge. It is a small detail but one makes the Stream feel a bit more upscale than the low price point would have you believe.

Unfortunately, the trackpad does not live up to the keyboard’s standards. Although the size is fine for a small laptop, the texture is not as smooth as I would like. Like most devices now, it is a clickpad. With no dedicated buttons for left/right click it is important to have good recognition of taps, and the Stream 11’s Synaptics unit has been unreliable in that regard. Several times I found myself tapping and waiting, only to realize that the tap was not registered. It does support all of the standard multitouch gestures, but I found myself disabling the Edge swipes almost immediately due to them constantly registering. A trackpad update to a better unit would improve this area, although that's unlikely considering the likely slim margins.

On the bottom of the device are the four rubber feet, which are large and easily keep the laptop from sliding around. There is nothing else on the bottom other than the two speaker grills. With the internals of the HP Stream 11 being Bay Trail based, the Stream 11 is completely fanless, so no air vents are required.

The overall design is quite good. It is small, easy to carry, fairly light, but feels solid. HP has basically taken the design of a Chromebook and put Windows on it. The color is bright and wonderful, and the texture is good. Some work needs to be done on the trackpad, and possibly the wobble of the space bar, but the overall package is exactly what Windows PCs need at the low end of the market.