We find a monstrous 4100mAH battery inside of the Mate 7 which should theoretically provide it excellent runtimes. Let's see if that is the case. 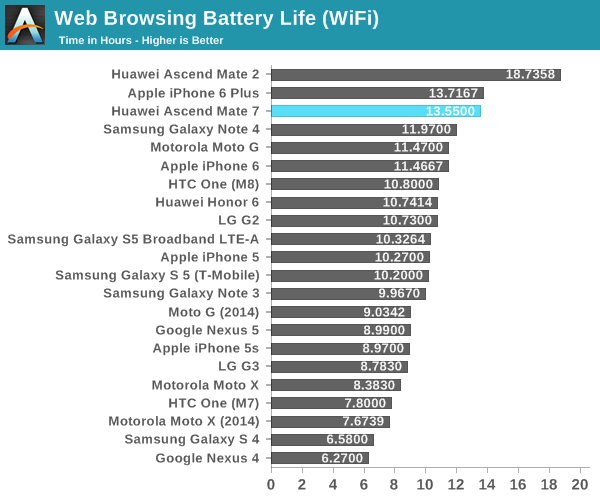 The Wifi web-browsing test ends up at 13.5 hours for the Mate 7. While this is a enormous lifetime for usual Android devices, it's pretty disappointing in conjunction with the size of the battery. The iPhone 6 performs almost equally with a 1200mAh smaller battery. Even the Note 4 with its AMOLED screen which is usual unfavourable to our web-browsing test isn't too far behind with its 3200mAH battery. Of course the Mate 7 has a slightly bigger screen, but it's still only 1080p compared to the Note 4's. I would have expected the Mate 7 to be in the range of its predecessor, the Mate 2, but that device remains very lonely among the top of our battery charts.

I did not do a objective run on 4G to be able to test the new Balong modem inside the Kirin. This is mostly due to a very different test environment than what we've ran our previous devices, mostly by Josh and Brian under 700MHz on AT&T. Here in Luxembourg we still only have access to 1600MHz LTE while 800MHz EUDD is still being freed for commercial use. As such, I prefer to avoid publishing any misleading numbers until I get a good portfolio of devices which I can all run under the same test conditions.

I can however give my subjective opinion on the matter: I haven't been impressed at all by Huawei's new modem. In daily usage under a mobile connection the device gets quite hot and drains the battery more than other devices sporting Qualcomm modems. I'm very skeptical of Huawei's modem and RF back-end, and hope that in the future they'll be able to improve power consumption. 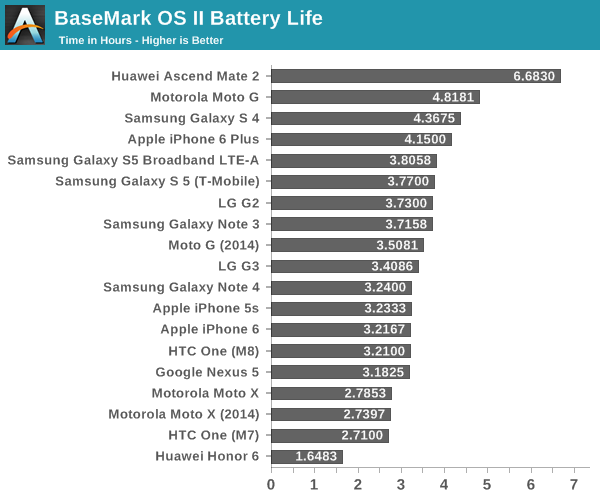 You might be wondering where the Mate 7 is on the BaseMark OS II graph. The truth is rather ugly.

I've tried several times to complete the battery test on BaseMark OS II and failed each time. After 25 minutes the device would shut off due to overheating and reach scorching hot temperatures. This is the hottest I have ever seen any mobile device be, and I could not comfortably hold the device after it crashed on the test. The phone discharged at a rate of 0.7% per minute during those 20 minutes, meaning it should have reached about 2.3 hours of lifetime, again one of the worst scores we've ever seen, short of the Honor 6. This projects a sustained TDP of about 6.5W, much above what a phone factor is able to dissipate.

I've already criticized the lack of any power arbitration mechanism back in the Honor 6 review and saw that the thermal policies were behaving weirdly. To see this continue on the Mate 7 is disheartening. The fact that Huawei's thermal policies catastrophically failed to maintain the device running and avoid a critical shutdown at mere 21°C indoor room temperature is basically inexcusable. All I can say is that I'm left baffled by this discovery, as the Mate 7 marks the first device to fail this test. 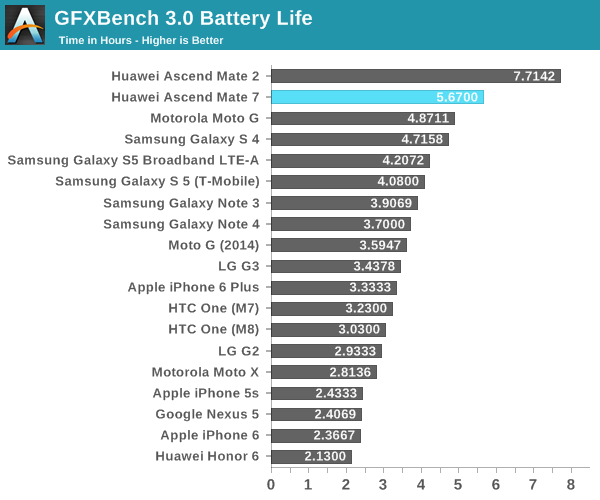 The GFXBench 3.0 battery run is much improved over the Honor 6, again due to more aggressive thermal throttling on the GPU. Here the Mate 7 manages to reach 5.6 hours lifetime, but with a great performance sacrifice.

Overall, I deem the Mate 7 battery life to be bad, and a step back in terms of efficiency. For users who just browse a lot with their device or frequently use social media applications, the Mate 7 performs quite well. If you are a frequent gamer, I'd strictly recommend against the Mate 7.

The Mate 7 uses a what has now become a standard 5V 2A charger. The charger IC sets up a 1750mA input power rate which ends up at around 7W charge power in the fast-charge phase of the battery before it slows down to three slower phases of trickle-charging. 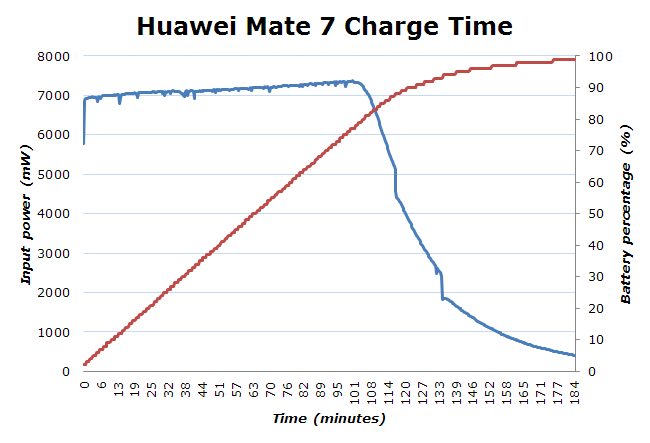 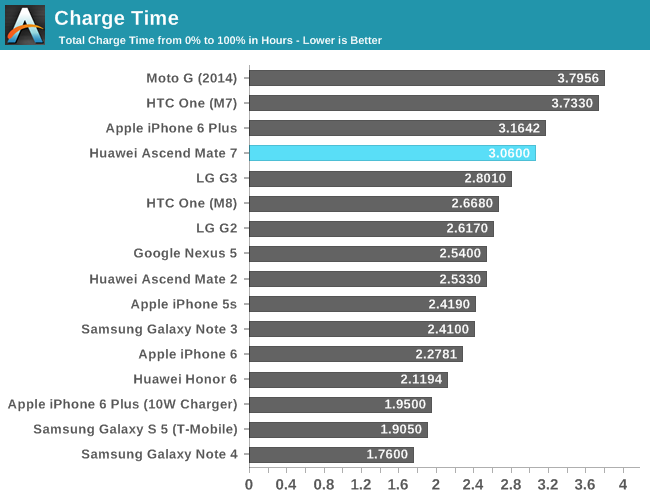 We see a similar charge curve as on the Honor 6; the power decreases a lot after reaching 85% at the 100 minute mark and it takes another 85 minutes to fill the last 15% for a total of a little over 3 hours. This is neither bad considering the 4100mAh battery, but nothing to write home about either, especially since we've seen in the introduction of chargers at increased voltage operation.