The GIGABYTE GB-BXBT-1900 does have a small fan (as shown in one of the pictures in the hardware gallery on the first page), but it is quite inaudible compared to even the quiet GB-BXi7-4500. As such, for users unwilling to digest the premium pricing of passively cooled PCs at this performance level, the BXBT-1900 is an ideal choice. The only issue, as we will see in this section, is that the HTPC capabilities offered do not go beyond what the lower priced ECS LIVA can deliver while being fanless. Since both are based on Bay Trail chipsets, this is not an issue.

Another aspect that HTPC users need to keep in mind while considering Bay Trail systems is the HD audio bitstreaming capability. The hardware is indeed capable, and we do get Dolby Digital Plus bitstreaming with the Windows 8.1 Netflix app. However, XBMC and other commercial software Blu-ray players are unable to bitstream DTS-HD and TrueHD audio on Windows 8.1 due to a missing software component for the Bay Trail chipset. OpenELEC (and other such bootable operating systems) has no problems, though, because it doesn't rely on the Windows component (obviously) for HD audio support.

AMD and NVIDIA have historically been able to provide fine-grained control over display refresh rates. The default rates are also quite accurate. Intel used to have an issue with 23 Hz (23.976 Hz, to be more accurate) support, but that was resolved with the introduction of Haswell. As expected, the GIGABYTE GB-BXBT-1900 has no trouble with refreshing the display appropriately in the 23 Hz setting. 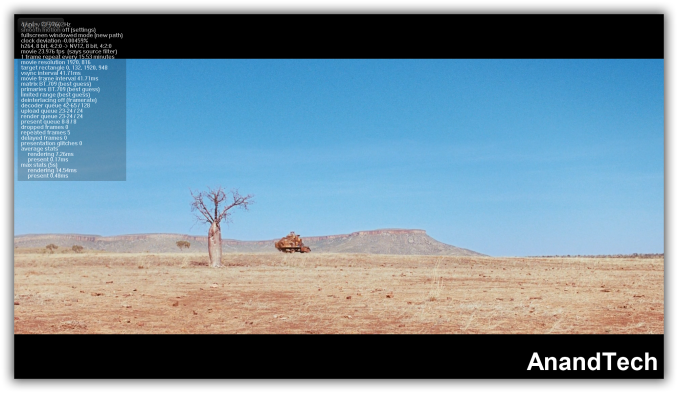 Evaluation of OTT playback efficiency was done by playing back our standard YouTube test stream and five minutes from our standard Netflix test title. Using HTML5, the YouTube stream plays back a 720p encoding, while Adobe Flash delivers a 1080p stream. Note that only NVIDIA exposes GPU and VPU loads separately. Both Intel and AMD bundle the decoder load along with the GPU load. The following two graphs show the power consumption at the wall for playback of the HTML5 stream and the Adobe Flash stream in Mozilla Firefox v32.0.1. For HTML5 streaming, the GPU load averaged around 36.96%, while it was 24.31% for the Flash version. 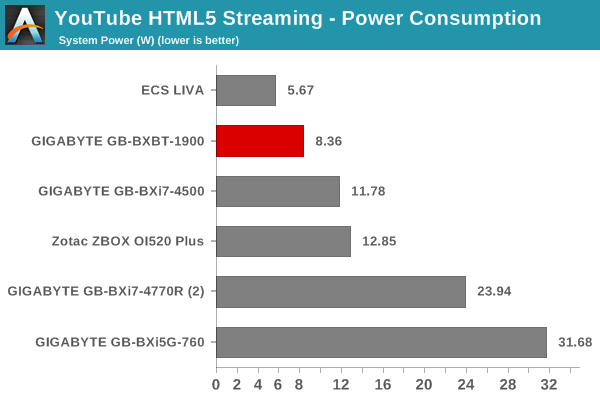 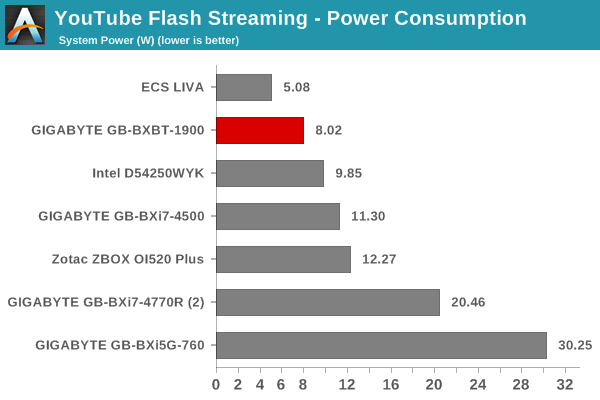 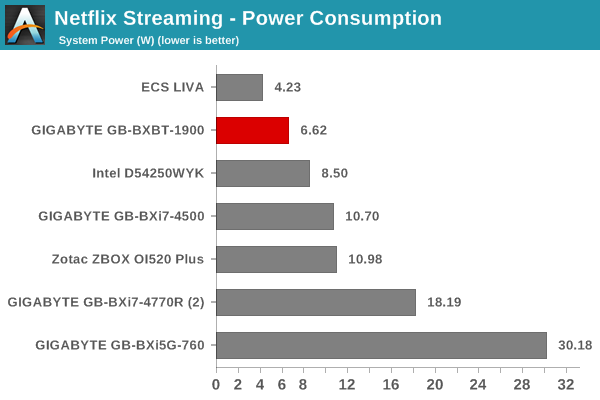 In order to evaluate local file playback, we concentrate on EVR-CP and madVR. We already know that EVR works quite well even with the Intel IGP for our test streams. Given our results from the evaluation of ECS LIVA, we decided to test only EVR-CP with DXVA2 native decoding for the BXBT-1900. The decoder used was LAV Filters bundled with MPC-HC v1.7.7.

Entries in bold indicate visible dropped frames. For non-4K and non-interlaced material, the system has no trouble keeping up with the playback. The target market for this type of system will probably not be interested in anything other than vanilla 1080p24 content, and for those folks, the system can act as a good HTPC with EVR-CP as the renderer.