In the past two days we have seen two announcements targeting IoT and wearable devices from major semiconductor companies. These announcements may seem premature as there hasn’t been a game changing device release like the original iPhone was, but the companies involved are simply doing what they have done before and investing in the future. Much of ARMs work before the ARM11 processor was behind closed doors or simply unnoticed by consumers at large, but it was there. Watching the suppliers evolve to provide suitable products, documentation, and tooling for something new is exciting.

The Coretex-M7 processor pushes the performance of ARMs dedicated MCU line to new levels, helping ARM further consolidate MCUs and DSPs into a single ARM ISA compatible 32-bit CPU. The increased performance and features also allow device makers to rely more on the always on MCU and power up the AP much less often, improving overall power consumption and even enabling devices that were previously impractical.

ARM also invested in improving the interrupt latency of the M7 and provides qualification kits for safety critical standards like ISO 26262 (automotive) and IEC61508. Anyone with experience here knows just how expensive creating these kits can be.

For major MCU SoC vendors like ST, Atmel, NXP, Freescale, TI, and others, the prospect of integrating a CPU core off-the-shelf from ARM means less R&D investment in processor design and documentation with a potentially greater payoff by tapping into the ARM ecosystem. Additionally, rather than hand coding their own development IDEs and compilers, they can serve their users with existing open source alternatives. To consumers, consolidation could bring similarities to the Windows + Intel days when software developers gained immense efficiency. 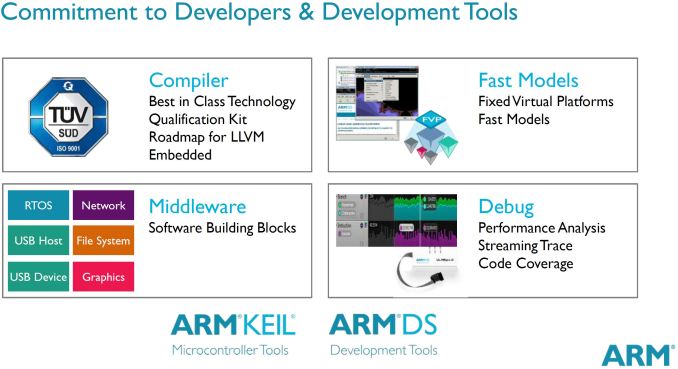 Many IoT and wearable devices today accomplish their roles using high power A series application processors. This is by design, as the companies providing them simply reused their smartphone processors to get product to market as fast as possible. Designing a heterogeneous system using MCUs and application processors is more complex but the benefits are undeniable. As the IoT and wearable devices mature, we will keep a close eye on the underlying technology of future devices and hope to report some positive changes over the next year.