Having already seen the Maxwell architecture in action with the GTX 750 series, the GTX 980 and its GM204 Maxwell 2 GPU have a very well regarded reputation to live up to. GTX 750 Ti shattered old energy efficiency marks, and we expect much the same of GTX 980. After all, NVIDIA tells us that they can deliver more performance than the GTX 780 Ti for less power than the GTX 680, and that will be no easy feat.

We’ll start as always with voltages, which in this case I think makes for one of the more interesting aspects of GTX 980. Despite the fact that GM204 is a pretty large GPU at 398mm2 and is clocked at over 1.2GHz, NVIDIA is still promoting a TDP of just 165W. One way to curb power consumption is to build a processor wide-and-slow, and these voltage numbers are solid proof that NVIDIA has not done that.

With a load voltage of 1.225v, NVIDIA is driving GM204 as hard (if not harder) than any of the Kepler GPUs. This means that all of NVIDIA’s power optimizations – the key to driving 5.2 billion transistors at under 165W – lie with other architectural optimizations the company has made. Because at over 1.2v, they certainly aren’t deriving any advantages from operating at low voltages.

Next up, let’s take a look at average clockspeeds. As we alluded to earlier, NVIDIA has maintained the familiar 80C default temperature limit for GTX 980 that we saw on all other high-end GPU Boost 2.0 enabled cards. Furthermore as a result of reinvesting most of their efficiency gains into acoustics, what we are going to see is that GTX 980 still throttles. The question then is by how much.

What we find is that while our GTX 980 has an official boost clock of 1216MHz, our sustained benchmarks are often not able to maintain clockspeeds at or above that level. Of our games only Bioshock Infinite, Crysis 3, and Battlefield 4 maintain an average clockspeed over 1200MHz, with everything else falling to between 1151MHz and 1192MHz.  This still ends up being above NVIDIA’s base clockspeed of 1126MHz – by nearly 100MHz at times – but it’s clear that unlike our 700 series cards NVIDIA is much more aggressively rating their boost clock. The GTX 980’s performance is still spectacular even if it doesn’t get to run over 1.2GHz all of the time, but I would argue that the boost clock metric is less useful this time around if it’s going to overestimate clockspeeds rather than underestimate. (ed: always underpromise and overdeliver) 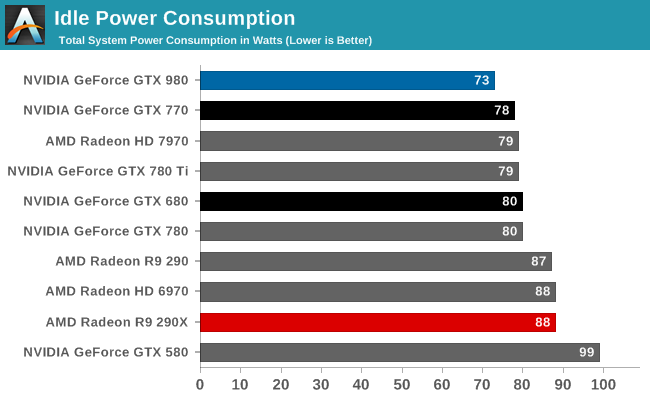 Starting as always with idle power consumption, while NVIDIA is not quoting specific power numbers it’s clear that the company’s energy efficiency efforts have been invested in idle power consumption as well as load power consumption. At 73W idle at the wall, our testbed equipped with the GTX 980 draws several watts less than any other high-end card, including the GK104 based GTX 770 and even AMD’s cards. In desktops this isn’t going to make much of a difference, but in laptops with always-on dGPUs this would be helpful in freeing up battery life. 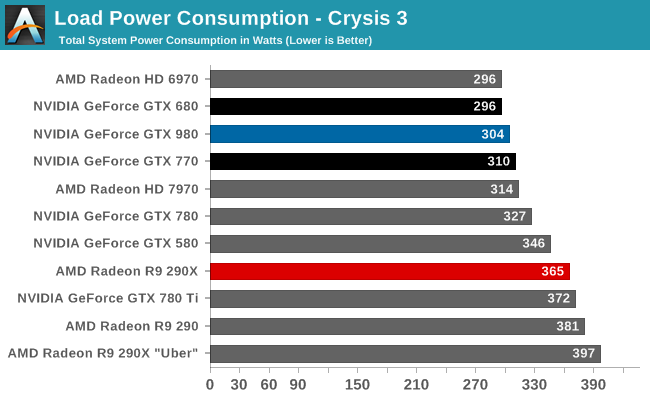 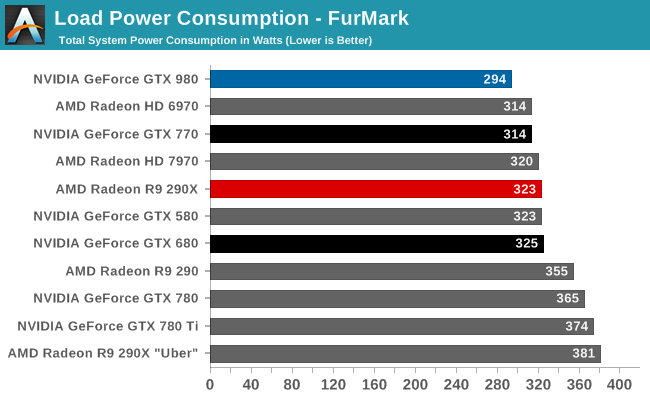 For that reason, when looking at recent generation cards implementing GPU Boost 2.0 or PowerTune 3, we prefer to turn to FurMark as it essentially nullifies the power consumption impact of the CPU. In this case we can clearly see what NVIDIA is promising: GTX 980’s power consumption is lower than everything else on the board, and noticeably so. With 294W at the wall, it’s 20W less than GTX 770, 29W less than 290X, and some 80W less than the previous NVIDIA flagship, GTX 780 Ti. At these power levels NVIDIA is essentially drawing the power of a midrange class card, but with chart-topping performance. 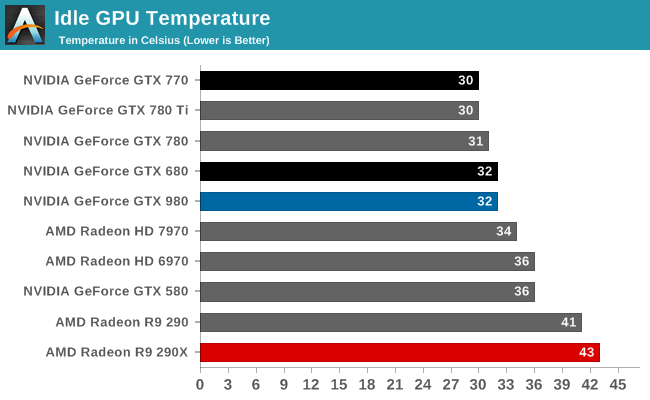 Moving on to temperatures, at idle we see nothing remarkable. All of these well-designed, low idle power designs are going to idle in the low 30s, especially since they’re not more than a few degrees over room temperature. 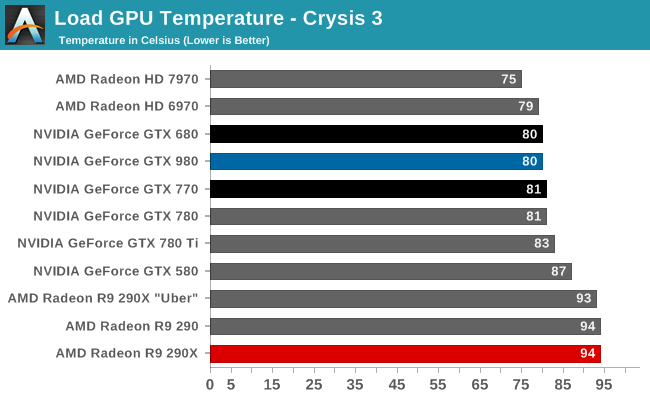 With an 80C throttle point in place for the GTX 980, it’s here where we see the card top out at. The fact that we’re hitting 80C is the reason why the card is exhibiting clockspeed throttling as we saw earlier. NVIDIA’s chosen fan curve is tuned for noise over temperature, so it’s letting the GPU reach its temperature throttle point rather than ramp up the fan (and the noise) too much. 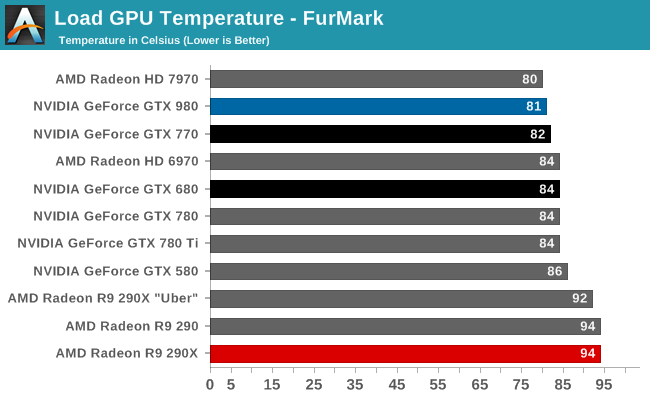 Once again we see the 80C throttle in action. Like all GPU Boost 2.0 NVIDIA cards, NVIDIA makes sure their products aren’t going to get well over 80C no matter the workload. 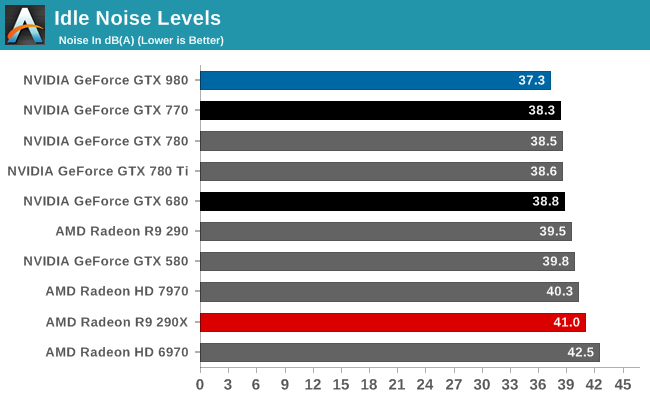 Last but not least we have our noise results. Right off the bat the GTX 980 is looking strong; even with the shared heritage of the cooler with the GTX 780 series, the GTX 980 is slightly but measurably quieter at idle than any other high-end NVIDIA or AMD card. At 37.3dB, the GTX 980 comes very close to being silent compared to the rest of the system. 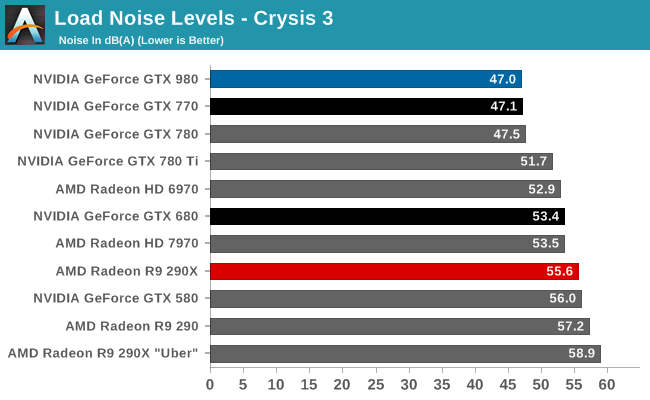 Our Crysis 3 load noise testing showcases the full benefits of the GTX 980’s well-built blower in action. GTX 980 doesn’t perform appreciably better than the GTX Titan cooler equipped GTX 770 and GTX 780, but then again GTX 980 is also not using quite as advanced of a cooler (forgoing the vapor chamber). Still, this is enough to edge ahead of the GTX 770 by 0.1dB, technically making it the quietest video card in this roundup. Though for all practical purposes, it’s better to consider it tied with the GTX 770. 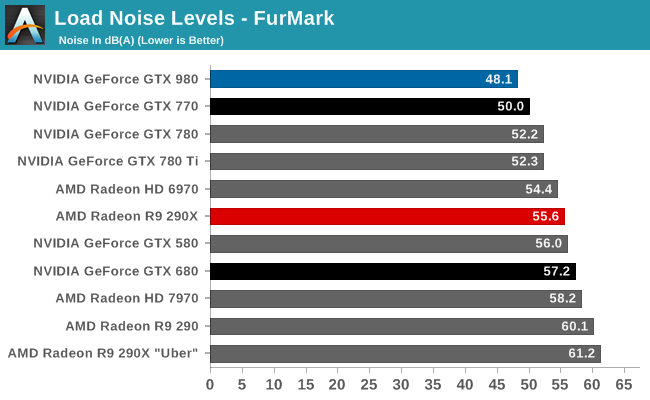 FurMark noise testing on the other hand drives a wedge between the GTX 980 and all other cards, and it’s in the GTX 980’s favor. Despite the similar noise performance between various NVIDIA cards under Crysis 3, under our maximum, pathological workload of FurMark the GTX 980 pulls ahead thanks to its 165W TDP. At the end of the day its lower TDP limit means that the GTX 980 never has too much heat to dissipate, and as a result it never gets too loud. In fact it can’t. 48.1dB is as loud as the GTX 980 can get, which is why the GTX 980’s cooler and overall build are so impressive. There are open air cooled cards that now underperform the GTX 980 that can’t hit these low of noise levels, never mind the other cards with blowers.

Between the GTX Titan and its derivatives and now GTX 980, NVIDIA has spent quite a bit of time and effort on building a better blower, and with their latest effort it really shows. All things considered we prefer blower type coolers for their heat exhaustion benefits – just install it and go, there’s almost no need to worry about what the chassis cooling can do – and with NVIDIA’s efforts to build such a solid cooler for a moderately powered card, the end result is a card with a cooler that offers all the benefits of a blower with the acoustics that can rival and open air cooler. It’s a really good design and one of our favorite aspects of GTX Titan, its derivatives, and now GTX 980.