On the other hand compared to our Kepler cards GTX 980 introduces a bunch of benefits. Higher CUDA core occupancy is going to be extremely useful in compute benchmarks. So will the larger L2 cache and the 96KB per SMM of shared memory. Even more important, compares to GK104 (GTX 680/770) GTX 980 inherits the compute enhancements that were introduced in GK110 (GTX 780/780 Ti) including changes that relieved pressure on register file bandwidth and capacity. So although GTX 980 is not strictly a compute card – it is first and foremost a graphics card – it has a lot of resources available to spend on compute.

As always we’ll start with LuxMark2.0, the official benchmark of SmallLuxGPU 2.0. SmallLuxGPU is an OpenCL accelerated ray tracer that is part of the larger LuxRender suite. Ray tracing has become a stronghold for GPUs in recent years as ray tracing maps well to GPU pipelines, allowing artists to render scenes much more quickly than with CPUs alone. 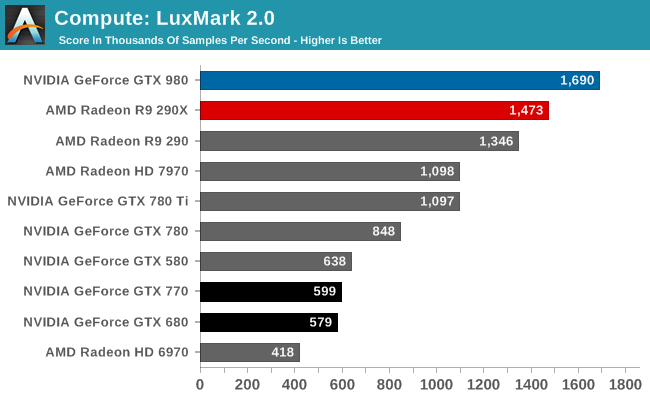 I’ve spent some time pondering this, and considering that GTX 750 Ti looked very good in this test as well it’s clear that Maxwell’s architecture has a lot to do with this. I don’t know if NVIDIA hasn’t also been throwing in some driver optimizations here, but a big part is being played by parts of the architecture. GTX 750 Ti and GTX 980 both share the general architecture and 2MB of L2 cache, while it seems like we can run out GTX 980’s larger 96KB shared memory since GTX 750 Ti did not have that. This may just come down to those CUDA core occupancy improvements, especially if you start comparing GTX 980 to GTX 780 Ti.

For our second set of compute benchmarks we have CompuBench 1.5, the successor to CLBenchmark. We’re not due for a benchmark suite refresh until the end of the year, however as CLBenchmark does not know what to make of GTX 980 and is rather old overall, we’ve upgraded to CompBench 1.5 for this review. 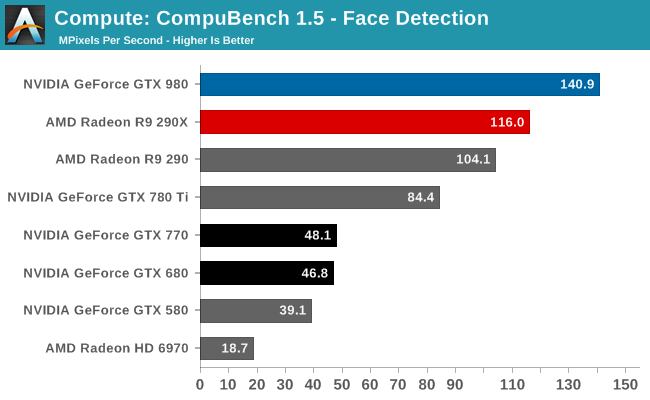 The first sub-benchmark is Face Detection, which like LuxMark puts GTX 980 in a very good light. It’s quite a bit faster than GTX 780 Ti or R9 290X, and comes close to trebling GTX 680. 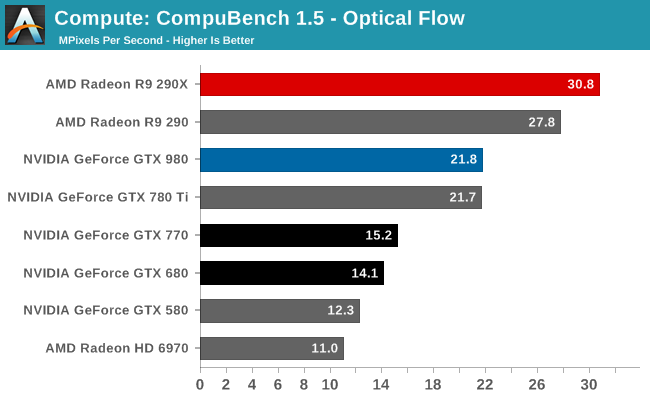 The second sub-benchmark of Optical Flow on the other hand sees AMD put GTX 980 in its place. GTX 980 fares only as well as GTX 780 Ti here, which means performance per CUDA core is up, but not enough to offset the difference in cores. And it doesn’t get GTX 980 anywhere close to beating R9 290X. As a computer vision test this can be pretty memory bandwidth intensive, so this may be a case of GTX 980 succumbing to its lack of memory bandwidth rather than a shader bottleneck. 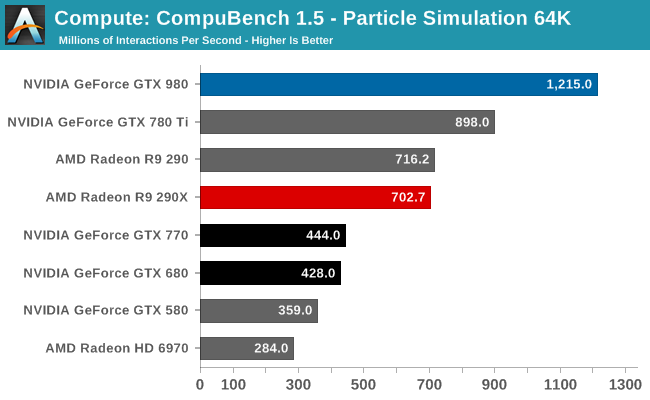 The final sub-benchmark of the particle simulation puts GTX 980 back on top, and by quite a lot. NVIDIA does well in this benchmark to start with – GTX 780 Ti is the number 2 result – and GTX 980 only improves on that. It’s 35% faster than GTX 780 Ti, 73% faster than R9 290X, and GTX 680 is nearly trebled once again. CUDA core occupancy is clearly a big part of these results, though I wonder if the L2 cache and shared memory increase may also be playing a part compared to GTX 780 Ti. 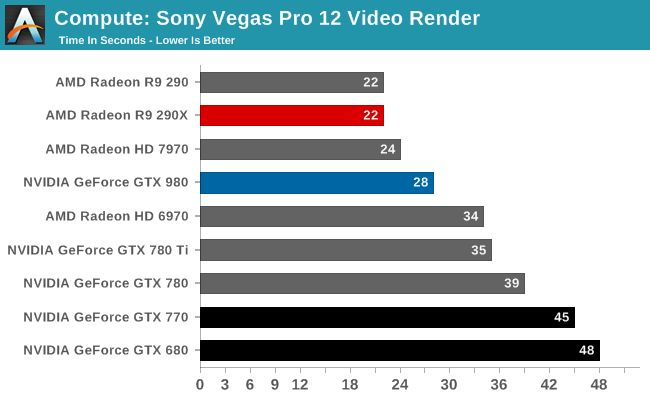 Traditionally a benchmark that favored AMD, the GTX 980 doesn’t manage to beat the R9 290X, but it closes the gap significantly compared to GTX 780 Ti. This test is a mix of simple shaders and blends, so it’s likely we’re seeing a bit of both here. More ROPs for more blending, and improved shader occupancy for when the task is shader-bound. 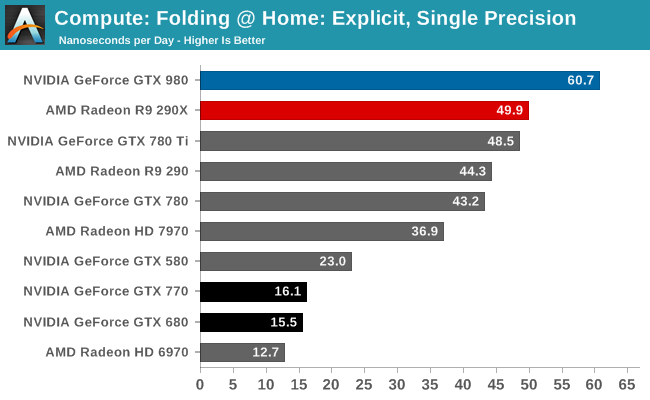 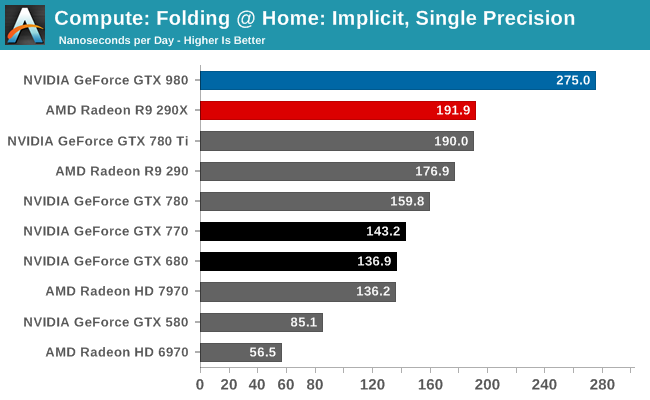 This is another success story for the GTX 980. In both single precision tests the GTX 980 comes out on top, holding a significant lead over the R9 290X. Furthermore we’re seeing some big performance gains over GTX 780 Ti, and outright massive gains over GTX 680, to the point that GTX 980 comes just short of quadrupling GTX 680’s performance in single precision explicit. This test is basically all about shading/compute, so we expect we’re seeing a mix of improvements to CUDA core occupancy, shared memory/cache improvements, and against GTX 680 those register file improvements. 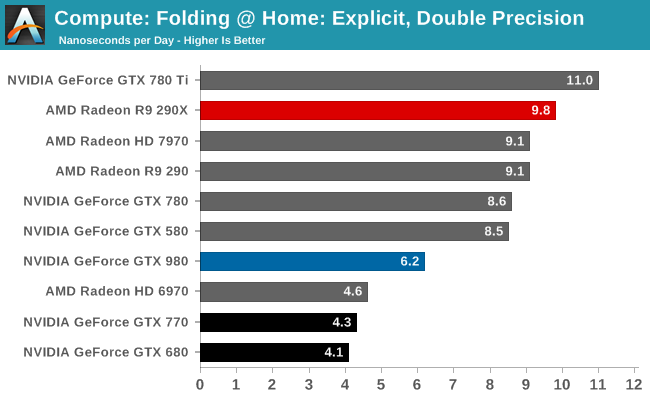 Double precision on the other hand is going to be the GTX 980’s weak point for obvious reasons. GM204 is a graphics GPU first and foremost, so it only has very limited 1:32 rate FP64 performance, leaving it badly outmatched by anything with a better rate. This includes GTX 780/780 Ti (1:24), AMD’s cards (1:8 FP64), and even ancient GTX 580 (1:8). If you want to do real double precision work, NVIDIA clearly wants you buying their bigger, compute-focused products such as GTX Titan, Quadro, and Tesla. 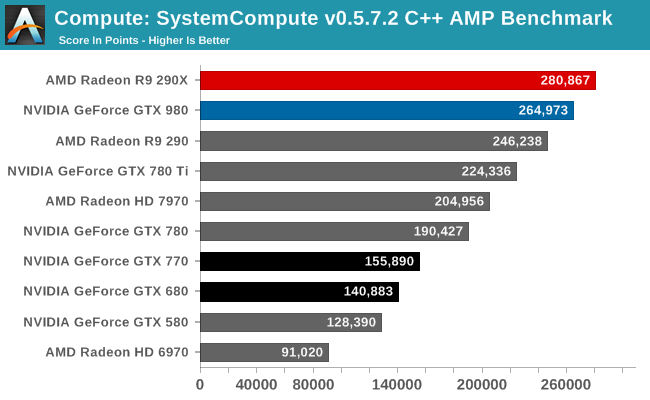 Once again NVIDIA’s compute performance is showing a strong improvement, even under DirectCompute. 17% over GTX 780 Ti and 88% over GTX 680 shows that NVIDIA is getting more work done per CUDA core than ever before. Though this won’t be enough to surpass the even faster R9 290X.

Overall, while NVIDIA can’t win every compute benchmark here, the fact that they are winning so many and by so much – and otherwise not terribly losing the rest – shows that NVIDIA and GM204 have corrected the earlier compute deficiencies in GK104. As an x04 part GM204 may still be first and foremost consumer graphics, but if it’s faced with a compute workload most of the time it’s going to be able to power on through it just as well as it does with games and other graphical workloads.

It would be nice to see GPU compute put to better use than it is today, and having strong(er) compute performance in consumer parts is going to be one of the steps that needs to happen for that outcome to occur.