As always we’ll also take a quick look at synthetic performance. These tests mainly serve as a canary for finding important architectural changes, and with the exception of pixel throughput we are not expecting any major changes for GTX 980 and GM204. 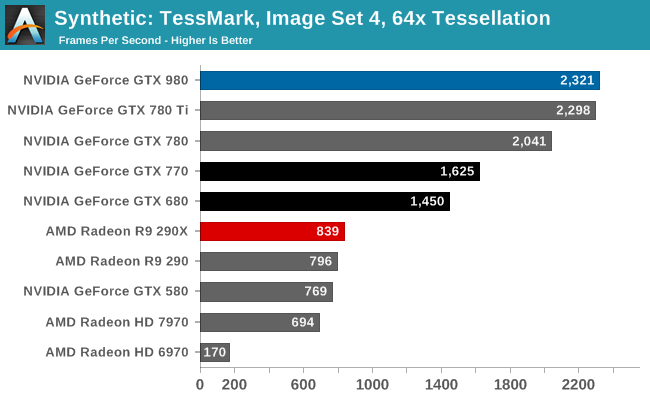 GM204 is designed to have an ever-so-slightly higher triangle throughput rate than GK110 – 16 tris/clock versus 15 tris/clock, and sure enough the GTX 980 comes out on top in TessMark, slightly edging out the GTX 780 Ti. The difference is only very slight here, and though GM204 should be a bit more powerful than GK110 in practice it’s a dead heat. 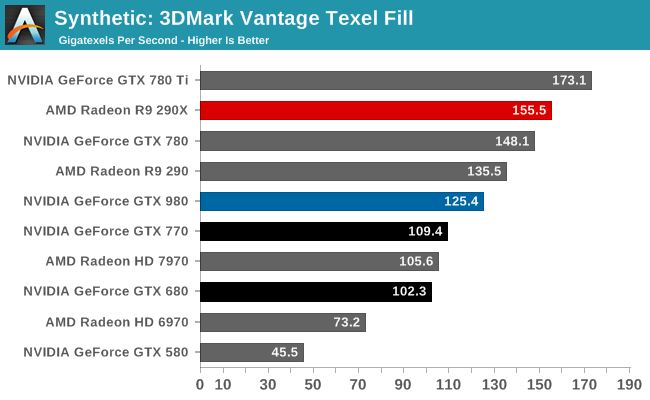 Beginning with Maxwell NVIDIA reduced their texture-to-compute ratio from 12:1 to 16:1. As a result of this change Maxwell GPUs have fewer texture units than comparable Kepler GPUs. Compounding this effect is the fact that Maxwell CUDA cores are more efficient than Kepler CUDA cores, leading to NVIDIA placing fewer cores overall and further reducing the texture fill rate.

As a result the GTX 980 is not texture fillrate competitive with any of the GK110 cards. It is competitive with the GK104 cards, but only because these cards had the same number of texture units at 128. NVIDIA has told us that they believe this new ratio is a better fit for modern workloads, and judging from the performance we’re seeing elsewhere it would appear that NVIDIA is right. 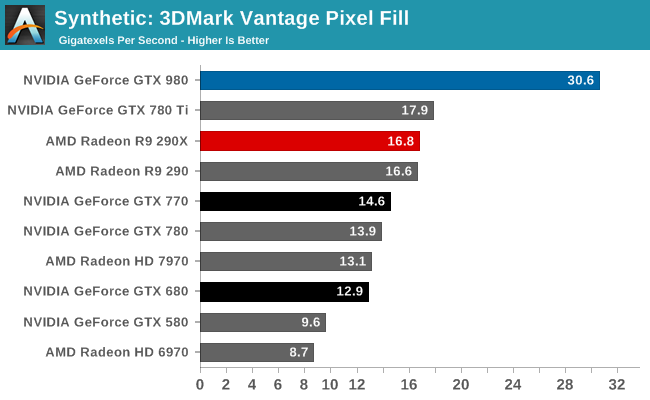 On the other hand, thanks to NVIDIA’s newer 3rd generation delta color compression technology, our 3DMark pixel fillrate performance is through the roof. GTX 980 comes very close to doubling the throughput of our GK110 cards and more than doubles the throughput of the GK104 cards, reflecting the fact that it has 64 ROPs and more importantly has the available bandwidth to put them to good use.

This benchmark in a nutshell is why NVIDIA can deliver chart-topping performance despite having only 2/3rds the memory bandwidth of GTX 780 Ti. By improving their color compression to this point, NVIDIA can significantly reduce their memory bandwidth requirements Maxwell 2, allowing them to do more with less. In real games the result won’t be anywhere near this remarkable since this is a pure pixel fillrate test, but it goes to show that NVIDIA has been able to expand their effective memory bandwidth in concert with their ROP and shader performance improvements.