One of GTX 750 Ti’s more remarkable features was its overclocking headroom. GM107 could overclock so well that upon initial release, NVIDIA did not program in enough overclocking headroom in their drivers to allow for many GTX 750 Ti cards to be overclocked to their true limits. This is a legacy we would be glad to see repeated for GTX 980, and is a legacy we are going to put to the test.

As with NVIDIA’s Kepler cards, NVIDIA’s Maxwell cards are subject to NVIDIA’s stringent power and voltage limitations. Overvolting is limited to NVIDIA’s built in overvoltage function, which isn’t so much a voltage control as it is the ability to unlock 1-2 more boost bins and their associated voltages. Meanwhile TDP controls are limited to whatever value NVIDIA believes is safe for that model card, which can vary depending on its GPU and its power delivery design.

GTX 980 does not let us down, and like its lower end Maxwell 1 based counterpart the GTX 980 turns in an overclocking performance just short of absurd. Even without real voltage controls we were able to push another 250MHz (22%) out of our GM204 GPU, resulting in an overclocked base clock of 1377MHz and more amazingly an overclocked maximum boost clock of 1515MHz. That makes this the first NVIDIA card we have tested to surpass both 1.4GHz and 1.5GHz, all in one fell swoop.

This also leaves us wondering just how much farther GM204 could overclock if we were able to truly overvolt it. At 1.25v I’m not sure too much more voltage is good for the GPU in the long term – that’s already quite a bit of voltage for a TSMC 28nm process – but I suspect there is some untapped headroom left in the GPU at higher voltages.

Memory overclocking on the other hand doesn’t end up being quite as extreme, but we’ve known from the start that at 7GHz for the stock memory clock, we were already pushing the limits for GDDR5 and NVIDIA’s memory controllers. Still, we were able to work another 800MHz (11%) out of the memory subsystem, for a final memory clock of 7.8GHz.

Memory overclocking is still effective, and it’s clear that GTX 980 spends some of its time memory bandwidth bottlenecked (otherwise we wouldn’t be seeing even these performance gains), but it’s simply not as effective as core overclocking. And since we have more core headroom than memory headroom in the first place, it’s a double win for core overclocking. 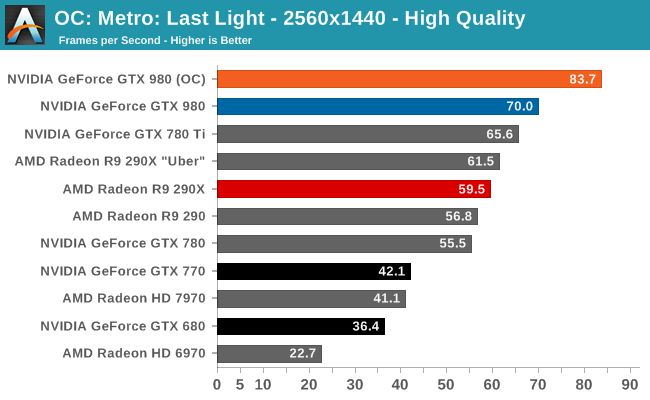 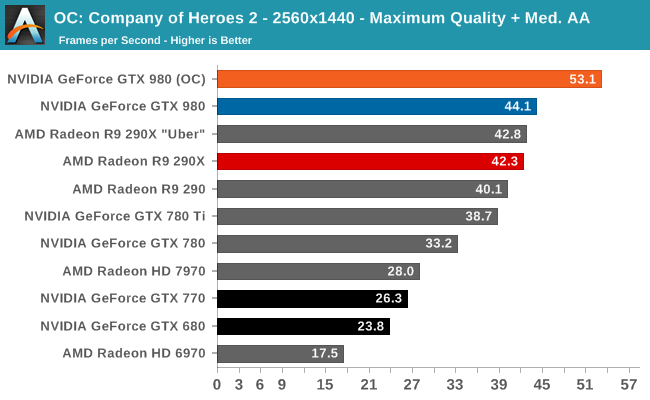 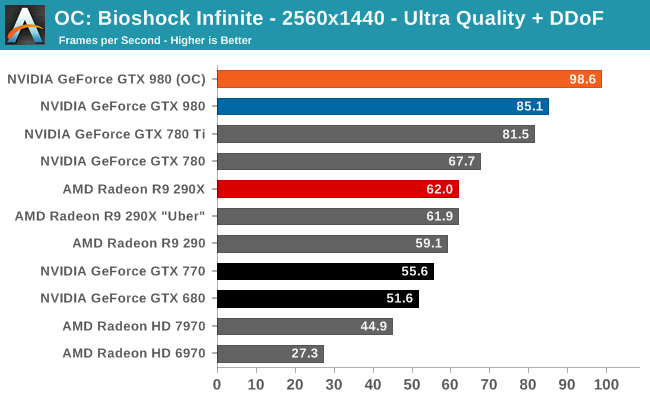 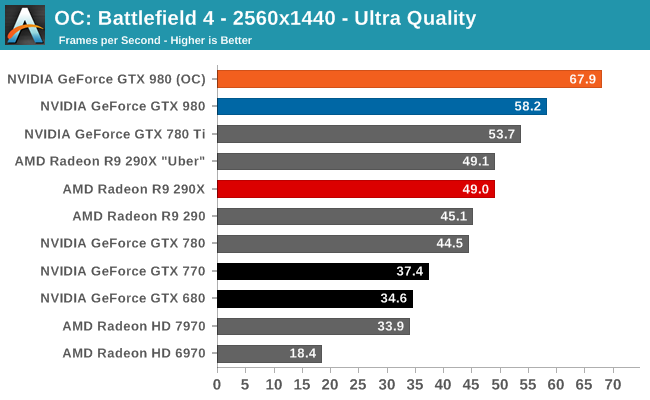 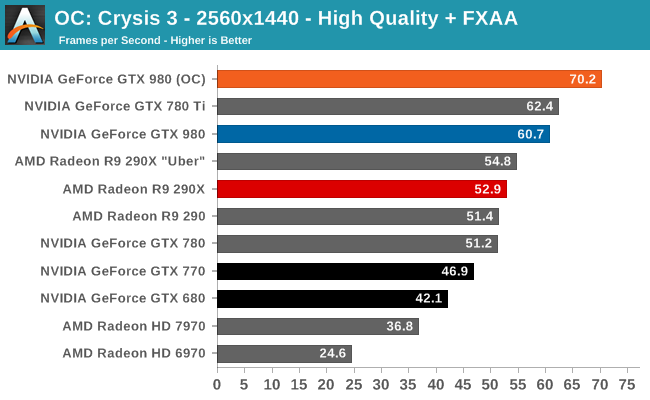 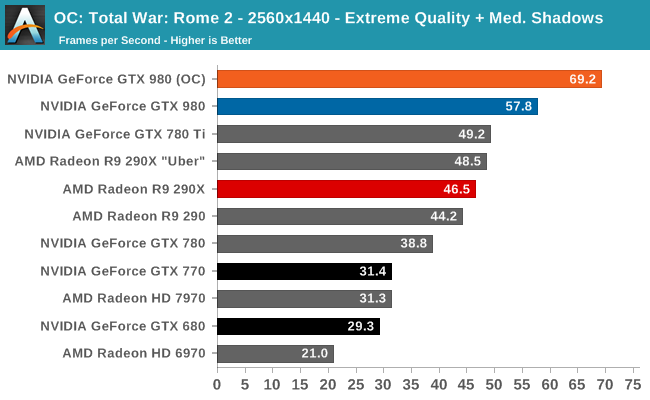 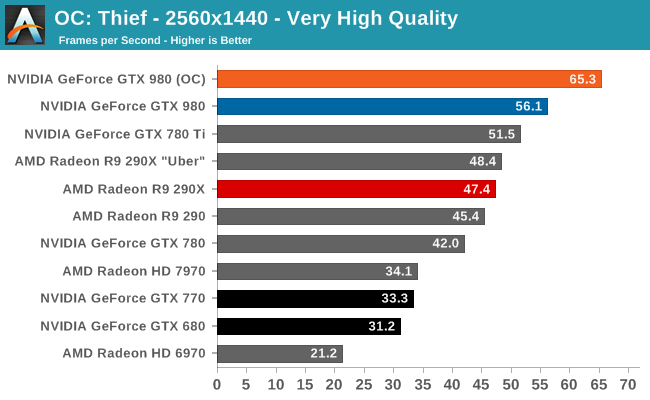 To put it simply, the GTX 980 was already topping the charts. Now with overclocking it’s another 15-20% faster yet. With this overclock factored in the GTX 980 is routinely 2x faster than the GTX 680, if not slightly more. 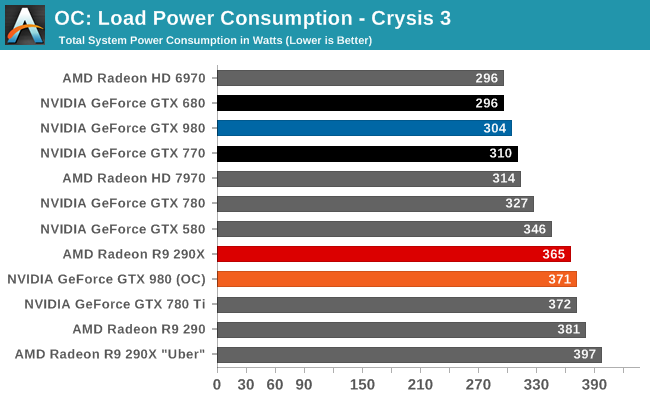 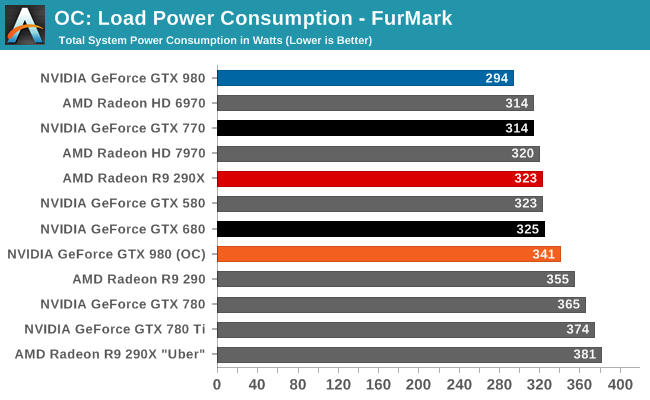 But you do pay for the overclock when it comes to power consumption. NVIDIA allows you to increase the TDP by 25%, and to hit these performance numbers you are going to need every bit of that. So what was once a 165W card is now a 205W card. 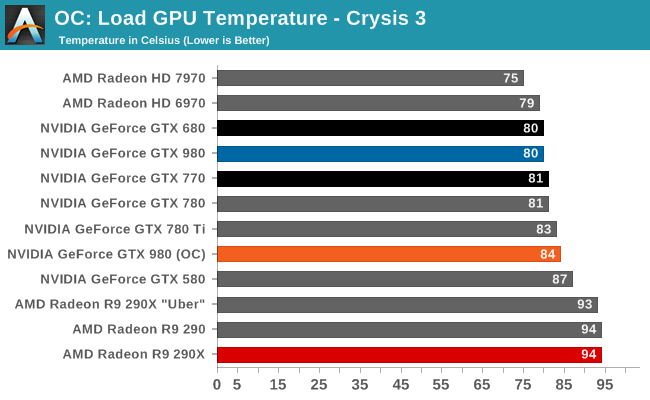 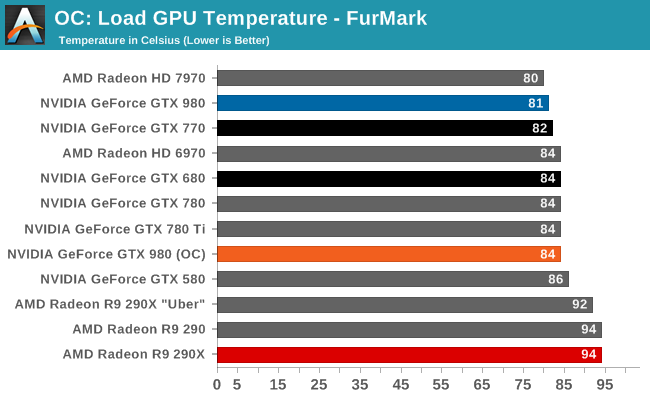 Even though overclocking involves raising the temperature limit to 91C, NVIDIA's fan curve naturally tops out at 84C. So even in the case of overclocking the GTX 980 isn't going to reach temperatures higher than the mid-80s. 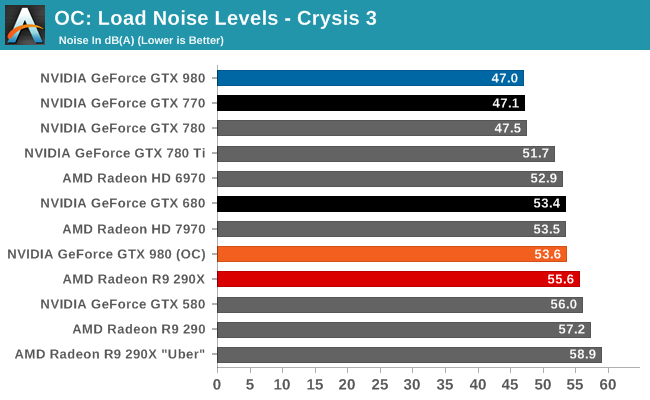 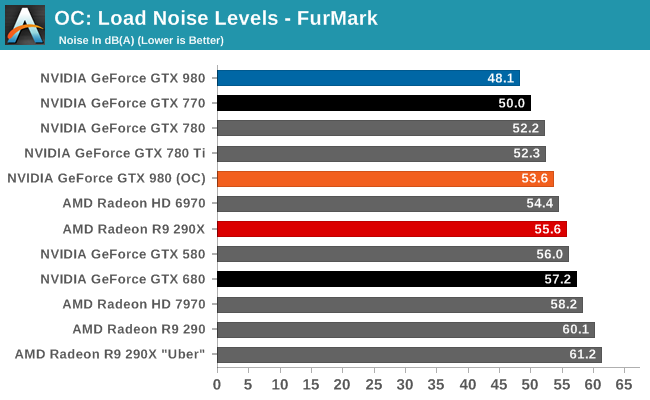 The noise penalty for overclocking is also pretty stiff. Since we're otherwise TDP limited, all of our workloads top out at 53.6dB, some 6.6dB higher than stock. In the big picture this means the overclocked GTX 980 is still in the middl of the pack, but it is noticably louder than before and louder than a few of NVIDIA's other cards. However interestingly enough it's no worse than the original stock GTX 680 at Crysis 3, and still better than said GTX 680 under FurMark. It's also still quieter than the stock Radeon R9 290X, not to mention the louder yet uber mode.