Some of the hottest software trends of today are Big Data and In Memory Business Analytics. Both applications benefit from fast processors, but even more importantly they are virtually unsatiable when it comes to RAM capacity. Another important area that's much closer to the daily work of many IT professionals is virtualization. As heavier applications are being virtualized, the typical amount of memory allocated to virtual machines has increased rapidly. As announced on the latest VMworld, vSphere 6 will now support Virtual machines that allocate up to 4TB (!!) of memory. The days where virtual machines were limited to only a fraction of "native" operating systems are behind us.

The advent of DDR4 has given the engineers of IDT the opportunity to give LRDIMMs a performance advantage instead of a disadvantage. By introducing data buffers close to the DRAM chips, they managed to reduce the I/O trace lengths tremendously. See the figure below.

The latency overhead of the extra buffering is thus significantly lower on DDR4 LRDIMMs. In other words, compared to Registered DDR4 running at the same speed with 1 DPC (1 DIMM per channel), the latency overhead will be small. As soon as you start to use more DIMMs per channel, LRDIMMs actually offer lower latency as they can run at higher speeds. 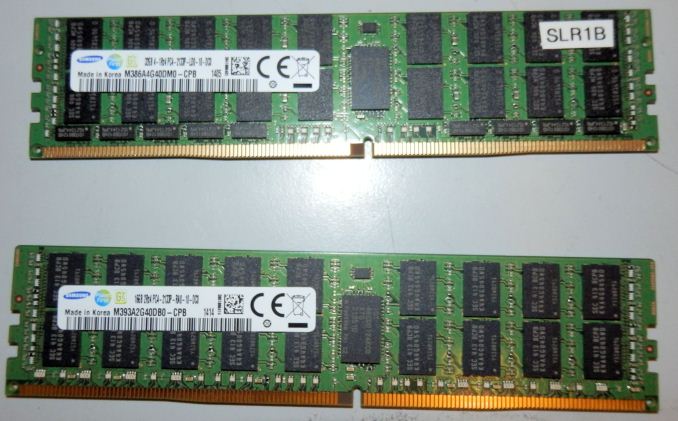 Samsung LRDIMM on top, RDIMM below. Notice the data buffers on the LRDIMM

Several sources tell us that LRDIMMs will be about 20%-25% more expensive. Our task then is to help you decide wether or not the investment is worth it. In this review, we will show some preliminary results.

The latency penalty has been reduced, but what about capacity? As you can see by the 4G marking in the photo above, the DIMMs used in our current servers are still using the mature 4Gbit DRAM chip technology. So currently, the Xeon E5-2600 v2 platform is limited to 384GB of registered DDR4 or 768GB of LRDIMMs. Quad-ranked RDIMMs, which were expensive, slow, and could only be used at 2DPC, are dead. The current 64GB LRDIMMs can be used at 3DPC, but they are Octal (!) ranks using quad-die-packages. As a result they are slow at 3DPC and power hungry.

But the future looks bright. At the end of this year, dual-ranked modules, such as the ones you can see above, will use 8Gb. This results in 64GB LRDIMMs and 32GB RDIMMs. That means the Xeon E5 platform will soon be able to address up to 1.5TB of physical RAM. In the second half of 2015, 128GB LRDIMMs should be available too, allowing up to 3TB of RAM.