In the world of laptops where I come from, we’re fast reaching the point – if not well beyond it – where talking about raw performance only matters to a small subset of users. Everything with Core i3 and above is generally “fast enough” that users don’t really notice or care. For tablets, the difference in speed between a budget and a premium device is far more dramatic. I’ve included numbers from the Dell Venue 8, which I’ll be providing a short review of in the near future. While the price isn’t bad, the two Samsung tablets feel substantially snappier – as they should. We’ll start with the CPU/system benchmarks and then move to the GPU/Graphics tests. 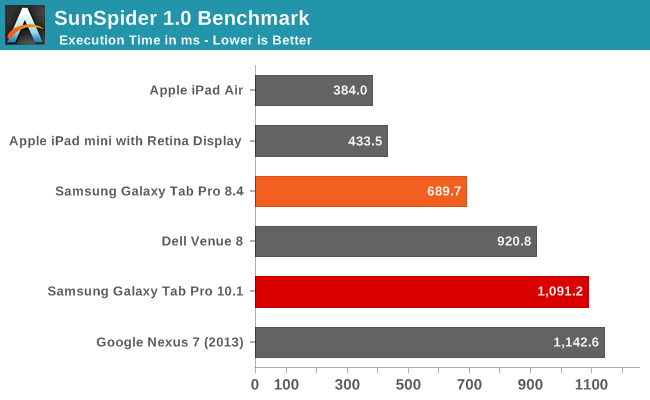 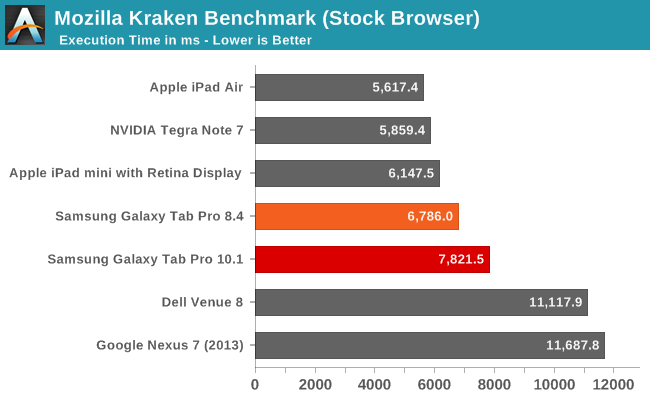 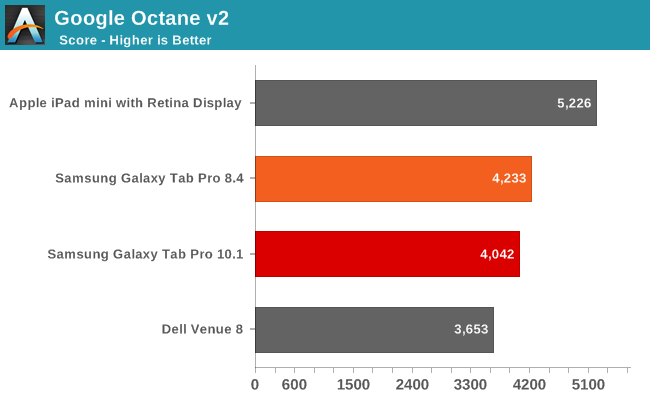 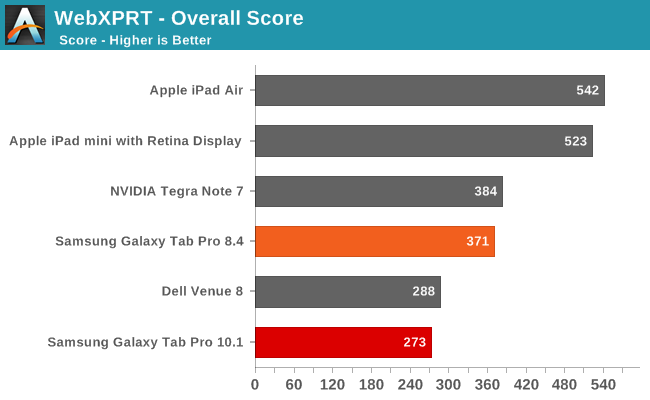 In terms of CPU speed, the Apple A7 chips still take the lead in all of our tests, though not always by a large margin. We’re also using different browsers (Chrome vs. Safari), and JavaScript benchmarks aren’t always the greatest way of comparing CPU performance. I ran additional benchmarks on the two Samsung tablets just to see if I could get some additional information; you can find a table of results for AndeBench, Basemark OS II, and Geekbench 3.

Interestingly, the Samsung Exynos 5 Octa 5420 just seems to come up short versus the Snapdragon 800 in most of these tests. However, there’s a bit more going on than you might expect. We checked for cheating in the benchmarks, and found no evidence that either of these tablets was doing anything unusual in terms of boosting clock speeds. What we did find is that the Pro 10.1 is frequently not running at maximum frequency – or anywhere near it – in quite a few of our CPU tests.

Specifically, Sunspider, Kraken, and Andebench had the cores hitting a maximum 1.1-1.3GHz. The Pro 8.4 meanwhile would typically hit the maximum 2.3GHz clock speed. The result, as you might imagine, is that the 8.4 ends up being faster, sometimes by a sizeable margin. Basemark OS II, Geekbench 3, and AnTuTu on the other hand didn’t have any such odd behavior, with the Pro 10.1 often hitting 1.8-1.9GHz (on one or more cores) during the testing, and when that happens it often ends up slightly faster than the Pro 8.4.

Which benchmark results are more "valid"? Well, that's a different subject, but as we're comparing Samsung tablets running more or less the same build of Android, we can reasonably compare the two and say that the 8.4 has better overall performance. Updated drivers or tweaking of the power governor on the 10.1 might change things down the road, but we can only test what exists right now.

Overall, both systems are sufficiently fast for a modern premium tablet, so I wouldn’t worry too much about whether or not you’re getting maximum clock speeds in a few benchmarks – in normal use you likely won’t notice one way or the other. But we’re only talking about the CPU performance when we say you won’t see the difference; let’s move over to the graphics benchmarks to see how the Galaxy Pro tablets fare. 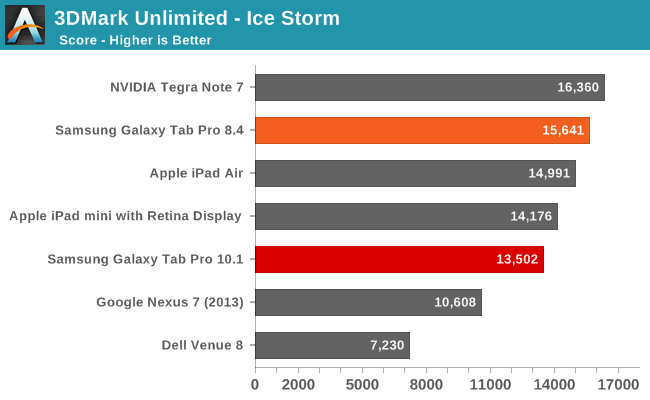 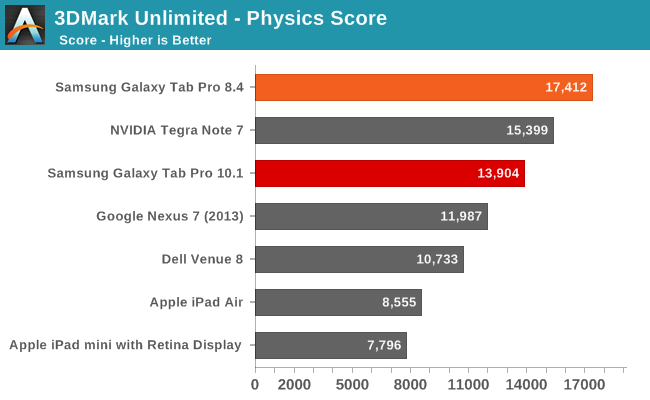 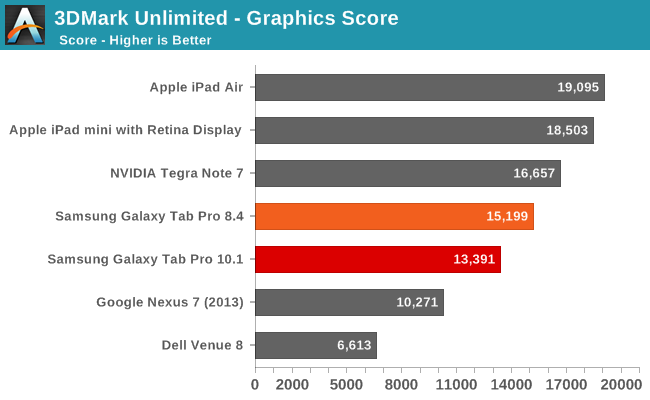 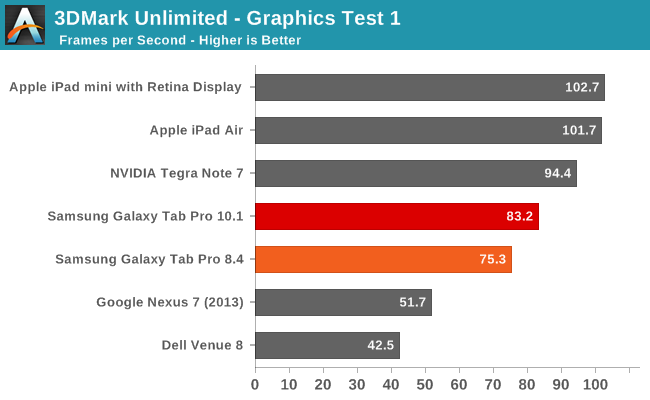 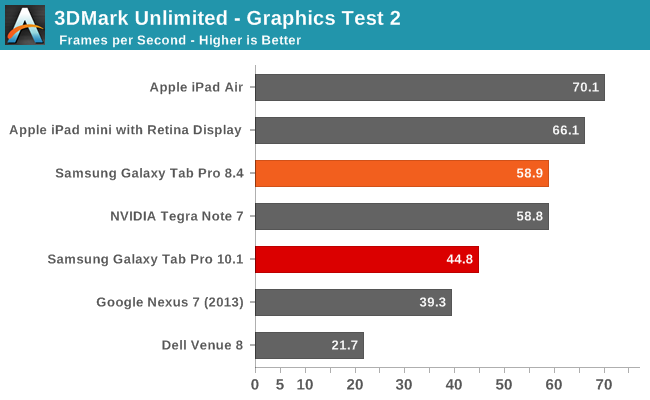 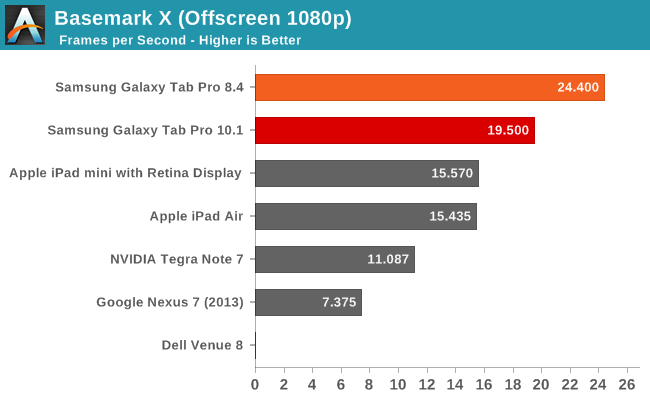 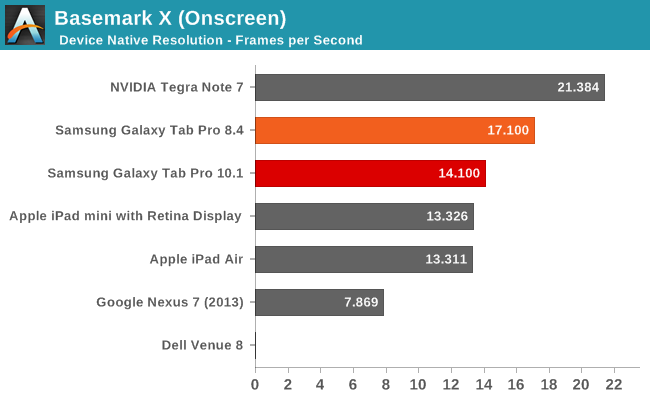 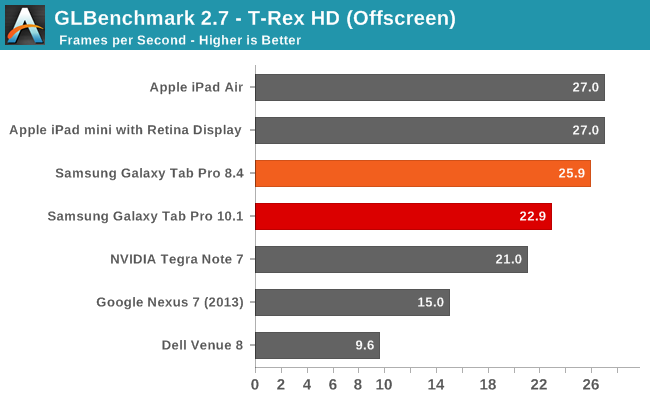 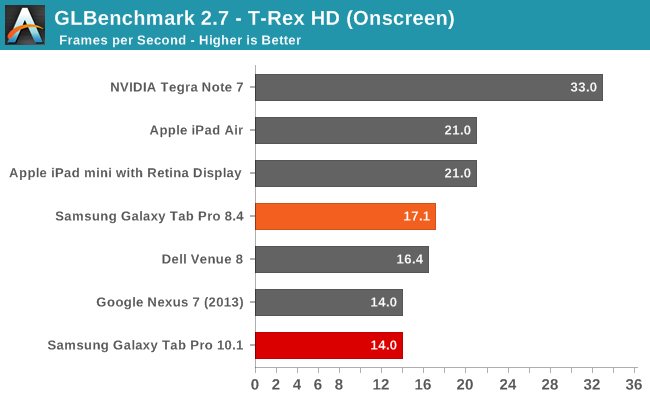 Outside of the 3DMark Unlimited Graphics Test 1 result, the Pro 8.4 sweeps the tables against its big brother. Playing games like Angry Birds Go! or any other reasonably demanding 3D titles in my experience confirms the above results – Adreno 330 beats the Mali-T628; end of discussion. I also had a few quirks crop up with the Pro 10.1 graphics, like Plants vs. Zombies 2 at one point stopped rendering all the fonts properly; a reboot fixed the problem, but I may have seen one or two other rendering glitches during testing. I have some additional results for GPU testing as well via GFXBench 3.0 if you’re interested:

The new Manhattan benchmark was one of the other tests where the Pro 10.1 didn’t seem to render things properly, and even then the Pro 8.4 ends up with nearly twice the frame rates. The ALU, Alpha Blending, and Fill rate scores might explain some of what’s going on, where in some cases the Pro 8.4 is more than four times as fast. Regardless, if you want maximum frame rates, I’d suggest getting the Pro 8.4 over the 10.1.