With the legacy Mac Pro comparison out of the way, I wanted to put the Mac Pro's performance in perspective relative to other high-end, modern Macs. I grabbed the 2012 15-inch rMBP, the entry level and upgraded 2013 15-inch rMBPs as well as the new 27-inch Haswell iMac for comparison. I also included my 2009 8-core Mac Pro. I received a reader request to try running the Cycles benchmark in Blender (an open source 3D renderer), so I'll start with that: 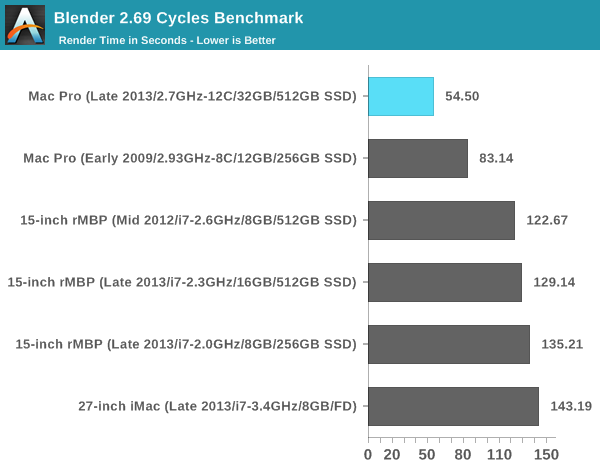 Under OS X, this is still a CPU test - the GPUs remain idle and out of the picture here. If you're wondering why the 27-inch iMac doesn't do so hot here, it's because I'm testing the 4 core/4 thread Core i5 version while the rMBPs all have Hyper Threading enabled and are thus 4 core/8 thread configs. The extra logical core per physical core definitely increases architectural utilization/efficiency in this well-threaded test.

Here we have an example where Haswell's IPC improvements don't do a whole lot, which is music to the ears of those considering buying a Mac Pro now vs. when Haswell EP hits in about a year. There's a clear benefit to opting for even the compact Mac Pro over any of Apple's other Macs. The improvement in performance, particularly with the 12-core configuration, is astounding. The Mac Pro completes the rendering work in less than half of the time of the rMBP.

For my next two tests I'm going to be looking at Final Cut Pro 10.1 performance. Given how much Apple is focused on 4K video editing as a usage model for the new Mac Pro, I went out and filmed a bunch of samples in 4K and created a couple of benchmarks to stress the new Mac Pro. As I mentioned earlier, most effects rendering in FCP 10.1 seems to take place on the GPU(s) while everything else seems more CPU bound. For my first test I wanted a project that was lighter on the GPU, so I had a minimal number of effects and no transitions. While the GPU still plays a role (as you'll see below), this should be a good CPU test. I confirmed that portions of the test had no problems keeping all 12 cores/24 hardware threads busy, while others stayed around the 5 - 8 core range.

You'll notice that I have two configurations of the early 2009 Mac Pro listed. One features the machine's stock NVIDIA GeForce GT 120, while the other has been upgraded to Sapphire's Radeon HD 7950 Mac Edition. The only other point I should make is the 2.0GHz 2013 15-inch rMBP configuration features no discrete GPU, it only has Intel's Iris Pro graphics. The 2.3GHz model does feature an NVIDIA GeForce GT 750M GPU. 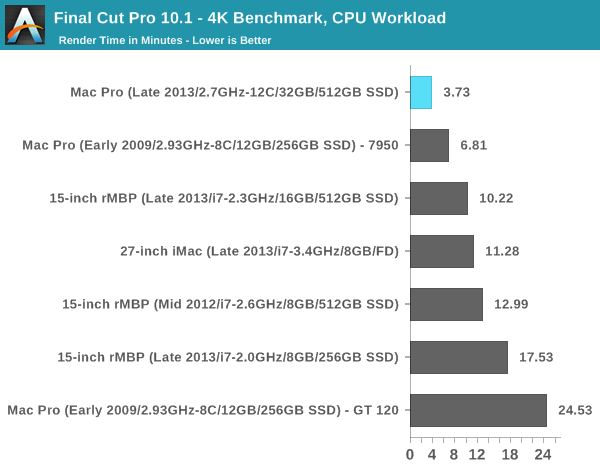 The first thing I noticed while running this test is how much the workload can impact CPU core utilization. Even though I was dealing with a substantial 4K project, only portions could spawn enough work to keep all 12 cores/24 threads busy. I suspect for video work the optimal cost/performance combination may be the 8-core/3.0GHz part. That being said, it is nice to have a handful of available cores to keep system responsiveness up even while working on rendering a big video project.

I made a point to talk about the GPU configurations before presenting the chart for a good reason: Final Cut Pro 10.1 appears to be incredibly dependent on GPU performance, especially when there's any sort of effects rendering going on. Note that simply moving to a lower clocked Haswell and ditching the discrete GPU causes the 15-inch rMBP to take more than 70% longer to complete this benchmark. I'm not sure how much of this has to do with Intel's graphics drivers just not being optimized for FCP's OpenCL workload, but if you're planning on doing any real work in the latest Final Cut Pro you're going to want a discrete GPU.

The new Mac Pro completed my first FCP 10.1 render test in around half the time of the older 2009 8-core Mac Pro with the upgraded GPU. Without the upgraded GPU, despite this being a very CPU bound test, the older Mac Pro is absolutely destroyed by the new config. The new Mac Pro manages to complete my 4K test in less than 1/6 of the time of the 2009 model without any ugprades.

The next FCP 10.1 benchmark adds in a significant number of effects and transitions to drive up GPU usage. I'm presenting two charts, one without the Iris Pro rMBP and GT 120 Mac Pro and one with them included: 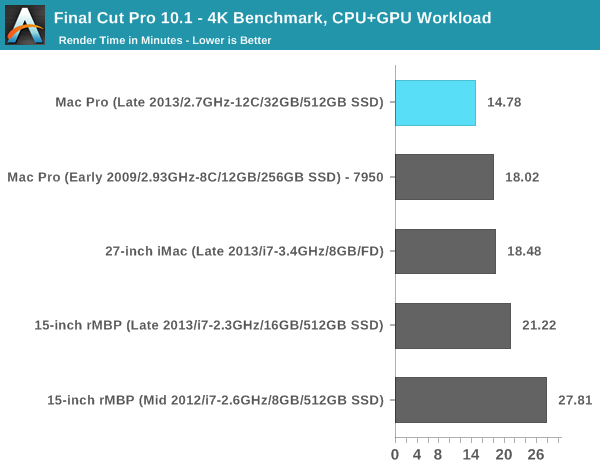 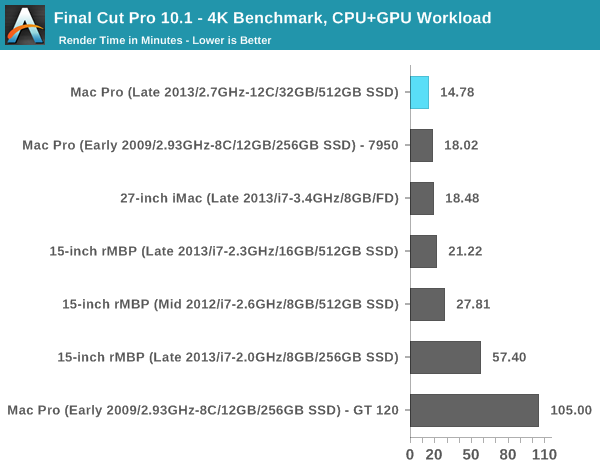 The difference in performance between Intel's Iris Pro graphics and NVIDIA's GeForce GT 750M is staggering. The Iris Pro rMBP15 configuration takes nearly an hour to complete my test, while the dGPU configuration does it in a little over 21 minutes. Here the 27-inch iMac's beefy GPU seems to help make it faster than the rMBP notebooks. The new Mac Pro pulls ahead of the upgraded 2009 model, though not by as much as I would've expected. The second GPU isn't being used as much as it could be it seems. Once again, a standard 2009 model wouldn't fare nearly as well here. Even with a Radeon HD 4870 I bet we'd be seeing significantly lower performance.

The default GT 120 GPU gives us a slight indication of what a slower GPU would do to FCP performance here. What took the new Mac Pro with its dual FirePro D700s under 15 minutes to do, took an hour and 45 minutes to do on the 2009 model with entry level GPU. The same system but with a Sapphire Radeon HD 7950 dropped its render time to 18 minutes.

It is really surprising just how big of an impact GPU performance can have on Final Cut Pro 10.1. It makes total sense that Apple went dual GPUs top to bottom with the new Mac Pro. It seems the latest version of Final Cut Pro was designed with the new Mac Pro in mind, which is unfortunate for anyone who was hoping to get by with an older Mac Pro with a far less capable GPU. It's very clear to me that the Mac Pro is really designed to be an upgrade on all fronts (CPU, GPU, SSD and external IO). The question is how many of those parts have existing Mac Pro users upgraded on their own. The answer to that will ultimately determine how big of a step forward the new Mac Pro really is.