Jumping into pure compute performance, we’re going to have several new factors influencing the 290X as compared to the 280X. On the front end 290X/Hawaii has those 8 ACEs versus 280X/Tahiti’s 2 ACEs, potentially allowing 290X to queue up a lot more work and to keep itself better fed as a result; though in practice we don’t expect most workloads to be able to put the additional ACEs to good use at the moment. Meanwhile on the back end 290X has that 11% memory bandwidth boost and the 33% increase in L2 cache, which in compute workloads can be largely dedicated to said computational work. On the other hand 290X takes a hit to its double precision floating point (FP64) rate versus 280X, so in double precision scenarios it’s certainly going to enter with a larger handicap. 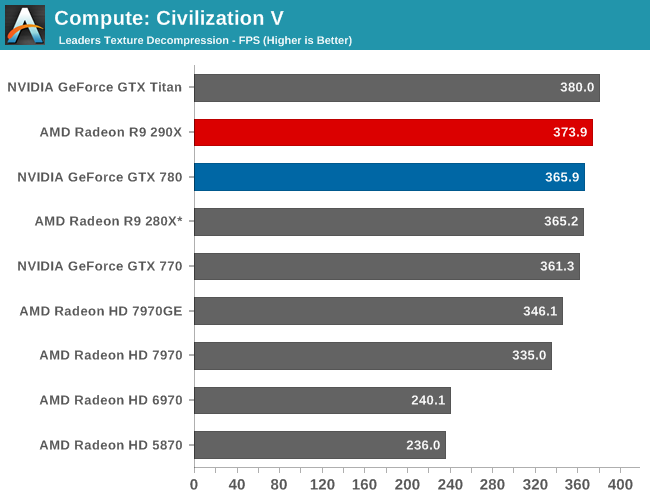 Unfortunately Civ V can’t tell us much of value, due to the fact that we’re running into CPU bottlenecks, not to mention increasingly absurd frame rates. In the 3 years since this game was released high-end CPUs are around 20% faster per core, whereas GPUs are easily 150% faster (if not more). As such the GPU portion of texture decoding has apparently started outpacing the CPU portion, though this is still an enlightening benchmark for anything less than a high-end video card.

For what it is worth, the 290X can edge out the GTX 780 here, only to fall to GTX Titan. But in these CPU limited scenarios the behavior at the very top can be increasingly inconsistent. 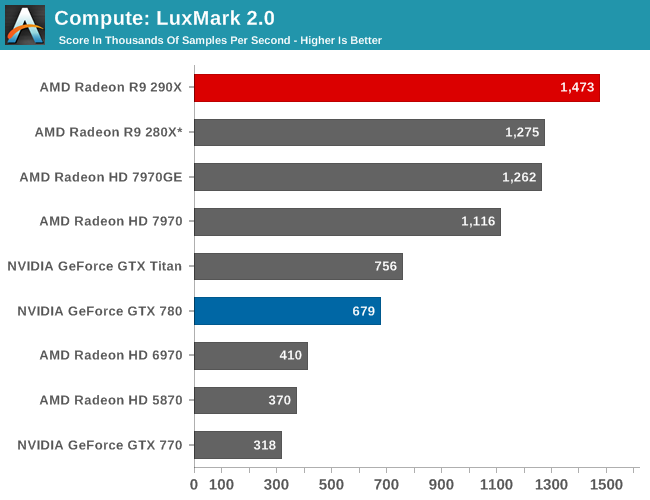 LuxMark by comparison is very simple and very scalable. 290X packs with it a significant increase in computational resources, so 290X picks up from where 280X left off and tops the chart for AMD once more. Titan is barely half as fast here, and GTX 780 falls back even further. Though the fact that scaling from the 280X to 290X is only 16% – a bit less than half of the increase in CUs – is surprising at first glance. Even with the relatively simplistic nature of the benchmark, it has shown signs in the past of craving memory bandwidth and certainly this seems to be one of those times. Feeding those CUs with new rays takes everything the 320GB/sec memory bus of the 290X can deliver, putting a cap on performance gains versus the 280X. 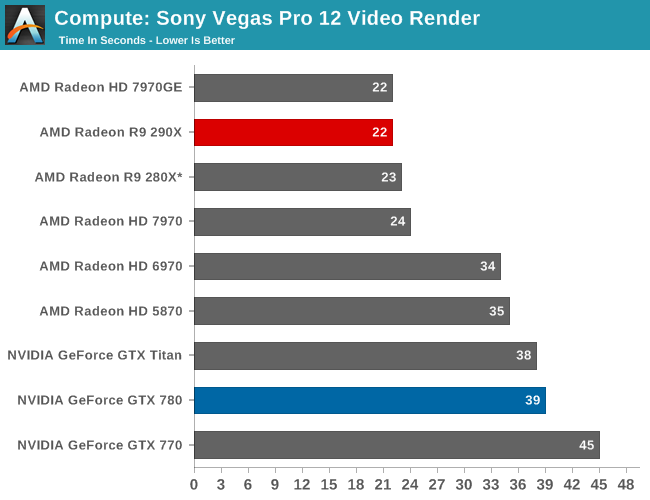 Vegas is another title where GPU performance gains are outpacing CPU performance gains, and as such earlier GPU offloading work has reached its limits and led to the program once again being CPU limited. It’s a shame GPUs have historically underdelivered on video encoding (as opposed to video rendering), as wringing significantly more out of Vegas will require getting rid of the next great CPU bottleneck. 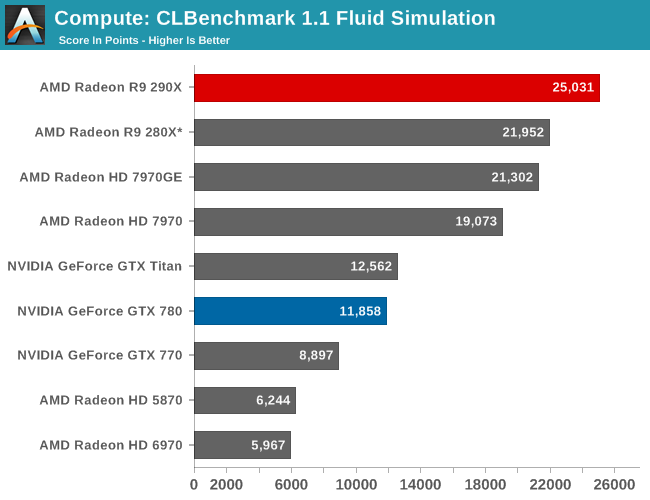 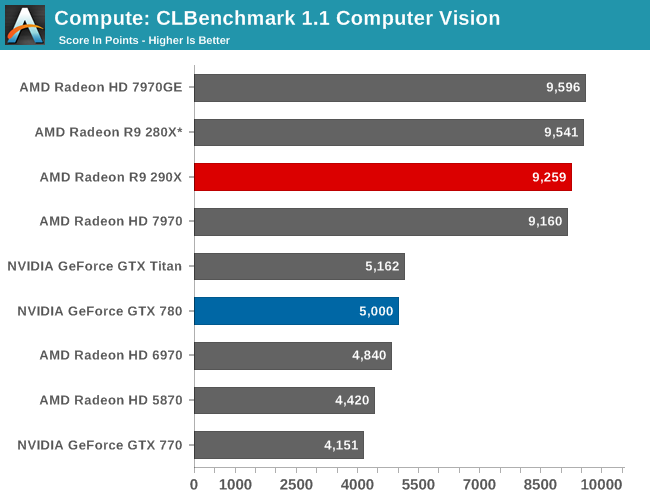 Curiously, the 290X’s performance advantage over 280X is unusual dependent on the specific sub-test. The fluid simulation scales decently enough with the additional CUs, but the computer vision benchmark is stuck in the mud as compared to the 280X. The fluid simulation is certainly closer than the vision benchmark towards being the type of stupidly parallel workload GPUs excel at, though that doesn’t fully explain the lack of scaling in computer vision. If nothing else it’s a good reminder of why professional compute workloads are typically profiled and optimized against specific target hardware, as it reduces these kinds of outcomes in complex, interconnected workloads. 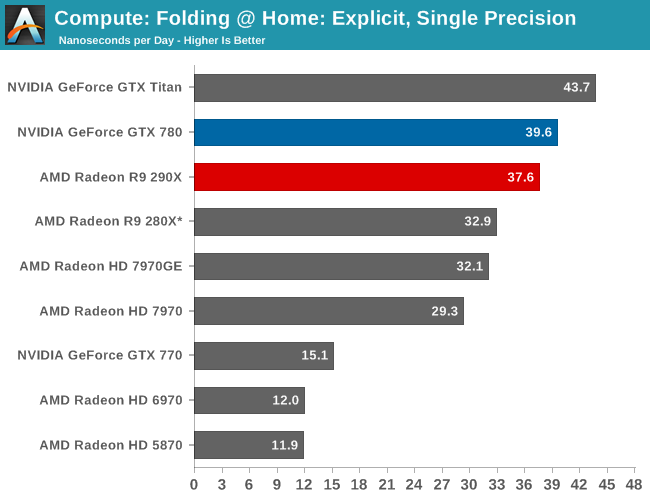 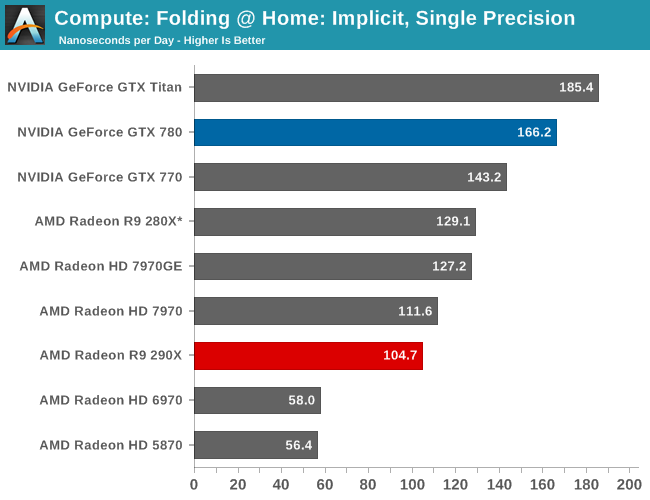 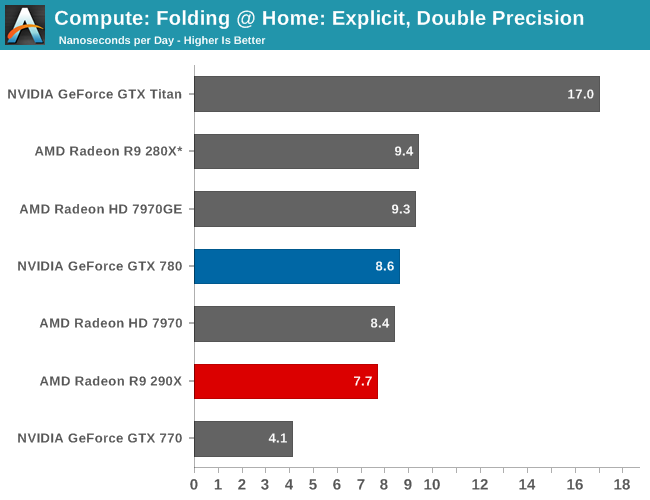 With FAHBench we’re not fully convinced that it knows how to best handle 290X/Hawaii as opposed to 280X/Tahiti. The scaling in single precision explicit is fairly good, but the performance regression in the water-free (and generally more GPU-limited) implicit simulation is unexpected. Consequently while the results are accurate for FAHCore 17, it’s hopefully something AMD and/or the FAH project can work out now that 290X has been released.

Meanwhile double precision performance also regresses, though here we have a good idea why. With DP performance on 290X being 1/8 FP32 as opposed to ¼ on 280X, this is a benchmark 290X can’t win. Though given the theoretical performance differences we should be expecting between the two video cards – 290X should have about 70% of the FP 64 performance of 280X – the fact that 290X is at 82% bodes well for AMD’s newest GPU. However there’s no getting around the fact that the 290X loses to GTX 780 here even though the GTX 780 is even more harshly capped, which given AMD’s traditional strength in OpenCL compute performance is going to be a let-down. 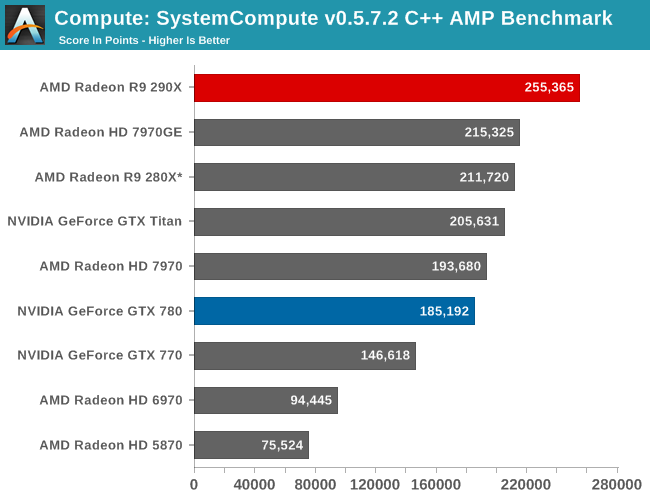 SystemCompute and the underlying C++ AMP environment scales relatively well with the additional CUs offered by 290X. Not only does the 290X easily surpass the GTX Titan and GTX 780 here, but it does so while also beating the 280X by 18%. Or to use AMD’s older GPUs as a point of comparison, we’re up to a 3.4x improvement over 5870, well above the improvement in CU density alone and another reminder of how AMD has really turned things around on the GPU compute side with GCN.